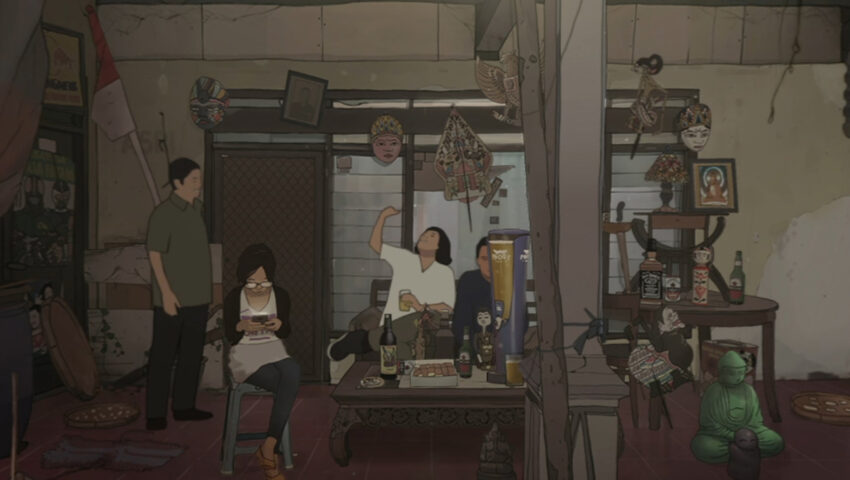 During SIGGRAPH 2021, we sat down with VR Theater Best in Show award winner Jonathan Hagard to discuss “Replacements (Penggantian).” This virtual reality film depicts a Javanese family observing their neighborhood changing day after day, generation after generation. It is an incredible story of change and family, played out through virtual reality. Hear what Jonathan had to say to us below.

SIGGRAPH: Tell us about the process of developing “Replacements (Penggantian).” What inspired you to pursue the project?

Jonathan Hagard (JH): “Replacements” is actually a follow up of “Time Lapse”, a short film I made in 2009 that also tells about the change of a village in Jakarta. At that time, Indonesia was very different. Despite an unstable economic situation, this was an era of freedom. “Time Lapse” was about this mix of excitement in discovering a new city, re-learning origins, and the uncertainty of how long it would last in the future. For a decade, many things changed. Religious extremists took advantage of that freedom. This diverse, colorful, Asian archipelago with its unique syncretic culture was, little by little, becoming a uniformed, monotonous, unrooted entity ruled by one religion and a political ideology in its most radical and retrograde aspect. In 2017,  Islamic parties won Jakarta governor elections for the first time and this was the green light to even more radical urban and cultural changes. This triggered the idea of making the story of “Replacements”. I wanted to take into consideration the latest changes that happened in Jakarta, especially in terms of culture and religion.

SIGGRAPH: How did the idea of the story come about specifically? What was your favorite aspect of depicting the family over time?

JH: My grandmother said, “Remember your roots to understand the future.” This local yet universal philosophy guided me all along the creation of “Replacements”. I wanted to create an appreciation for an Indonesian alley and how it changed in four decades. The folklore and routine behaviors that you see change between three different generations is something people can identify with.

I was, on one hand, inspired by my own family’s story and their house in Central Java and, on the other hand, used inspiration from researching Jakarta’s alleys for about 14 years. I wanted to give more emotion and nostalgia to the main protagonists, while also enhancing the documentary, neutral, and sometimes cold aspect of alleys.

SIGGRAPH: Did you come across any specific difficulties in making this compelling story translate into a VR world?

JH: When starting this project I didn’t know much about virtual reality. The first time I used a VR headset was one year before completing “Replacements”. I bought my first secondhand Oculus Go. It was challenging to learn day by day, and I sometimes doubted my ability to complete the film.

But, “Replacements” is not translation of a conventional film scenario to the VR world. I chose VR specifically because I thought it was the right medium for the story. “Replacements” is a linear film but it is full of small stories and elements that you cannot watch at the same time. VR gives [viewers] the ability to turn their head and discover new stories and new people. It is a pretty simple gesture, but a great storytelling technique. The viewer becomes completely immersed in the alley’s everyday life. It took me a lot of time to work on each detail and the amount of small stories that fill this Jakarta alley, but it worked out in the end.

SIGGRAPH: What do you find most exciting about the final product you presented to the SIGGRAPH community?

JH: “Replacements (Penggantian)” is a local story about a small alley in a country that most foreigners don’t know much about. It is always exciting, yet scary, to share this story to a non-Indonesian audience, most of whom can’t fully understand many of the details that fill “Replacements”. The ability to share my story and connect with people virtually at SIGGRAPH made it very exciting for me.

SIGGRAPH: What’s next for “Replacements (Penggantian)”? Can we expect to see more from you going forward?

JH: “Replacements (Penggantian)” is indeed not the last film I will do about Indonesia. My next project is a hybrid art and architectural experience using VR in the city of Ubud in Bali. “Alternates”, or Bergantian in Indoensian, is a spin off of “Replacements” — although the experience is completely different. “Alternates” is a ballet and an uchronia that takes place in Bali. It tells the story of two dancers a few years before a fictive 2025 Bali World exposition in an alternate timeline in which some decisive historical events did not happen in 1906. Unfortunately, this 6DoF, interactive project is still on hold due to the pandemic. We plan to start when we are able to travel to Indonesia again.

SIGGRAPH: What is your favorite SIGGRAPH memory, either from SIGGRAPH 2021 or a past SIGGRAPH conference?

JH: My best memory in SIGGRAPH 2021 was to share and learn from other VR filmmakers, especially during the Director’s Special Sessions.

SIGGRAPH: Now that SIGGRAPH 2021 is over, how does it feeling having won the Best in Show award?

JH: My main motivation to make “Replacements” was to show it to Indonesian people, it was later in the production that I realize the universal aspect of the philosophy behind its story.

I am grateful that the film can travel to so many countries, especially in such circumstances. It is almost a miracle. I am genuinely surprised that it was seen and rewarded by people outside of Indonesia. Now that “Replacements” touched the lives of so many people in the SIGGRAPH community and received the Best in Show award, it motivates me to tell these local stories to a wider audience.

SIGGRAPH: What advice do you have for someone looking to participate in future SIGGRAPH conferences, especially VR storytellers?

Jonathan Hagard is a French-Indonesian director, animator, and illustrator based in Kyoto, Japan. Between documentary and animated fiction, based on his experiences and researches in sprawling cities such Tokyo and Jakarta, he tells stories through traditional animation and new media.