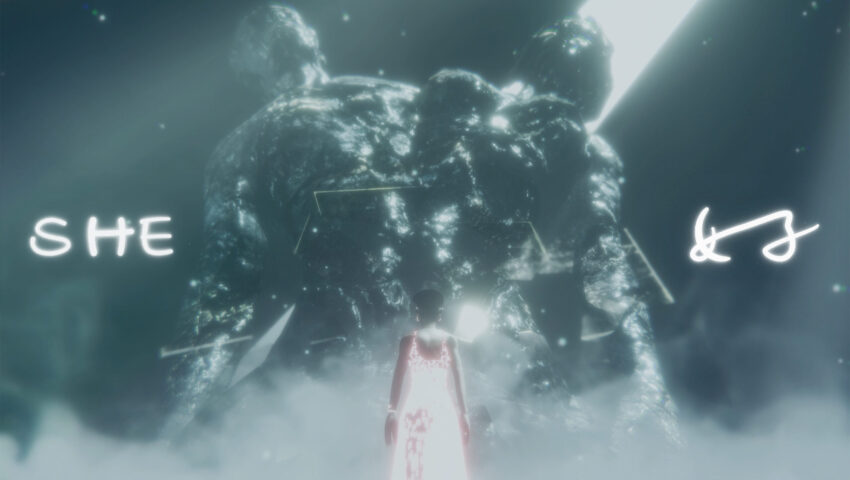 “She” © 2021 National Taiwan University of Science and Technology

As we near the end of Pride Month, we are honored to spotlight stories and work that illuminates the amazing contributions of the LGBTQ+ community to our industry and world at large. SIGGRAPH 2021 VR Theater interactive film “She” puts the viewer in the inner self of a boy exploring his gender identity after finding a magic lipstick that helps him to discover his feminine tendencies and ultimately gain self-acceptance.

We checked in with the creators behind “She” to explore how the story was formed and the technology that supported their ambitious vision.

SIGGRAPH: Can you share a bit about the process of developing the story of “She”? What was your inspiration?

“She” team: “She” is a story inspired by the observation of social phenomena centering on gender stereotypes. As they grow up, people more or less were expected to dress or act in certain ways that match their gender. Under such pressure, many people couldn’t have enough courage to be themselves. Therefore, we developed this phenomenon into a story about a boy exploring his gender identity.

SIGGRAPH: How did the story evolve throughout production?

“She” team: The development of our story focused on how to make good use of the advantages of VR to evoke this social issue. In this VR experience, viewers get the chance to be in the character’s shoes, allowing them to empathize with the character’s situation.

Prior research has shown that putting a light-skinned individual in a dark-skinned virtual body can temporarily reduce racial bias. This feature benefits the theme of “gender identity” a lot. For example, we use a mirror to connect viewers with the story’s protagonist to help viewers experience the process of exploring gender identity from the first-person perspective.

In addition, interactivity allows viewers to participate in the plot and helps viewers connect to the story world, which is another advantage of VR. However, the interactivity usually distracts viewers. Our goal is to strike a balance between watching and interacting with the story.

During the script development, we paid a lot of attention to creating meaningful interactive plots, which help viewers walk into the main character’s inner world.

Lastly, we included interactive elements at the critical twist of the story, allowing viewers to feel the presence in the story and be capable of pushing the story forward to help the boy find his original intention.

SIGGRAPH: Talk a bit about the perspective of the viewer in “She.” What is the role they play in the film?

“She” team: In the story, viewers represent the boy’s inner world, in which he endeavors to break down the status quo fearlessly. For that reason, viewers are embodied in different forms to interact with the story. By transforming their body appearances, viewers can discover which part of the boy’s inner world they are playing.

SIGGRAPH: What is the message that you hope viewers walk away with?

“She” team: We expect audiences to empathize with the story’s protagonist, reduce prejudice against those under such pressure, and even stop people from imposing gender stereotypes on others.

Moreover, we believe that everyone has the right to become whatever they want to be, regardless of race, age, or sex. We hope that anyone treated with scorn and ridicule when challenging stereotypes can still pluck up the courage to be themselves confidently.

SIGGRAPH: Can you share more about the technology behind “She”? What were some of the biggest technical challenges you encountered?

“She” team: The biggest technical challenge we face is narrative skills. Because of VR’s high degree of freedom, the director cannot restrict viewers’ viewpoints and movement during the story. We tried many ways to incorporate guidance to help viewers follow the plot without getting lost in the 360-degree environment. With the character’s body movement, lights, particle effects, and environment changes, we manage to attract the viewers’ attention to the core of the story and invite them to interact with the story as we planned.

In order to find out the unclear parts of the story and inappropriate interactions, we invited many testers to try our early version. By doing so, we could observe the viewers’ behavior in the story, leave good interactions, and correct the wrong guidance. We also interviewed the testers to assess whether the messages of the story were successfully delivered.

SIGGRAPH: What do you see as the future of VR storytelling and interaction?

“She” team: Compared to other narrative mediums, VR storytelling needs to consider how to immerse viewers into the story world and let them “experience” the story rather than “watching” it. The 360-degree environment and interactivity enhance viewers’ freedom in the story, but both of them make it harder for viewers to focus on the storyline.

As VR devices become more advanced, the development of controllers and hand tracking technology, coupled with the design of haptic feedback devices, will bring about more intuitive, innovative, and varied interactive designs.

In the meantime, we should go back to the roots to develop interactions depending on the messages we would like to express. We will see more narrative skills for VR be developed in the near future.

Register now for SIGGRAPH 2021 to enjoy “She” and other VR Theater content.

Yu-Hao Lee, director of “She,” is a graduate student in the Department of Design at National Taiwan University of Science and Technology. He joined the Innovative User Interface Lab (IUILab) led by Prof. Neng-Hao (Jones) Yu to study VR storytelling and interactive narrative. His creations include VR film, haptic feedback device, interactive installation, and CG animation. His work has been selected in the SIGGRAPH Asia 2020 XR program and the SIGGRAPH 2021 VR theater.

Neng-Hao (Jones) Yu, producer of “She,” received his Ph.D. from the Graduate Institute of Networking and Multimedia at the National Taiwan University (NTU), Taipei, Taiwan, in 2011. He is currently an assistant professor with the Department of Design at NTUST. Before joining NTUST, he created and directed the Innovative User Interface Lab (IUILab) through the Department of Computer Science at National Chengchi University (NCCU), Taipei, Taiwan. His research focuses on human-computer interaction, user experience design, and VR/AR. His works are often presented at a wide range of international conferences, such as ACM CHI, UIST, MobileHCI, and IEEE VR.

Wei-Zhe Tzeng, sound designer of “She,” was born in 1995 in Hualien, and is a graduate student in the Department of Design at National Taiwan University of Science and Technology. His research focuses mainly on interactive design in virtual reality and his creations cover VR, installation, audio, visual, gaming, and more. He believes that VR experiences have broken the boundary between narration and gaming and is capable of independent program development and sound design. He has participated in different interactive VR works such as PunchBeat, a VR beating game that combines jet device and punching; National Palace Museum on the fingertips that adds texture tactile feedback on relics of National Palace Museum. His thesis, “Cognitive Experience Design of Virtual Reality: A Preliminary Study”, was included in National Central Library, Taipei, Taiwan.