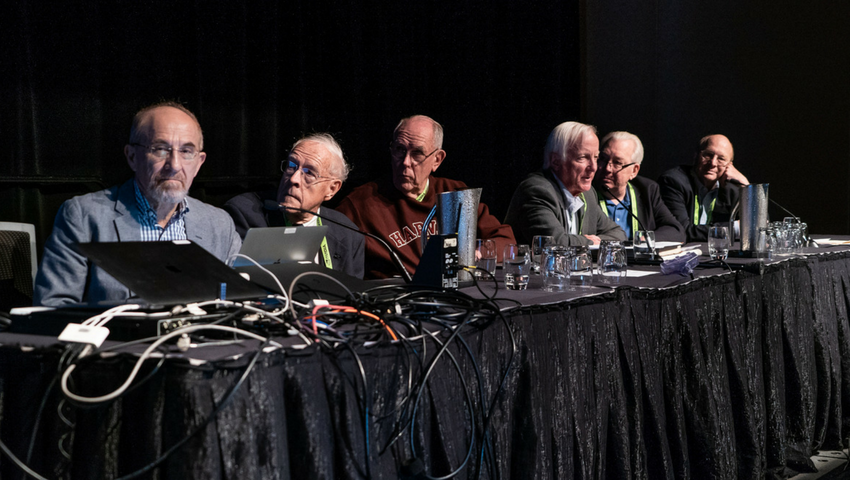 “I never thought much about the future. I couldn’t imagine what people would do with this thing. I just did it because it was interesting and seemed possible.”

So thought Ivan Sutherland about his Head-Mounted 3D Display System after creating it in 1968.

Little did he know the impact he would have.

VR had to start somewhere. And many say that somewhere was the 1968 3D Head-Mounted Display System created by Sutherland (now dubbed “the godfather of VR”) and an enthusiastic team at Harvard University. The system is widely considered to be the first virtual reality (VR) head-mounted display (HMD) system. This, of course, spawned decades of research and development in VR, enabling SIGGRAPH attendees to this day to create and experience unbelievable advances in computer graphics technology.

This Monday, at SIGGRAPH 2018, Sutherland and original team members Charles Seitz, Robert Sproull, and Quintin Foster spoke about the revolutionary work of their 1968 3D HMD System in an enlightening panel discussion. Through the discussion, attendees learned about the state of VR graphics in 1967 (just before the 3D HMD System was released), what technology was used to craft the 3D HMD System, and what inspired the project in the first place: a helicopter company.

During the panel, Sutherland shared that when we was a professor at the University of Utah, he visited the Bell Helicopter company in Fort Worth, Texas. The engineers at Bell were trying to help their pilots land in narrow clearings at night, so they got creative. They mounted infrared cameras underneath their helicopters and attached them to their pilots’ head equipment, which had some prisms in front so he could see. When the pilot turned his head, the camera underneath the helicopter moved in sync with those movements.

Sutherland thought, “That seems like a pretty clever idea.”

“My big contribution to the head-mounted display project was to recognize that we were just repeating what Bell Helicopter had done,” Sutherland said during the panel. “But instead of a camera, we could substitute a computer. And that replacement allowed us to view a mathematical world of our own choosing. We could see anything we wanted from any angle. And that would make it easy to understand complicated shapes.”

As Sutherland revealed, Bell Helicopter had already done important psychological experiments with the head-mounted display, which gave him confidence in the project. He described one such experiment in which a subject was sitting in an office building in a comfortable chair with equipment on his head, watching people play catch on the roof of the building via a camera on the roof. When one of the players threw the ball at the camera, the subject ducked. This led Sutherland to infer that the subject felt he was actually at the camera, not sitting in a comfortable office chair.

“It was clear that we could have a presence in this strange world that we would create from the computer,” Sutherland said. “There was no question whether the HMD would work or not. It was clearly going to work.”

Sutherland’s 1968 3D HMD System not only worked, but it also inspired years of VR research and development. If you ask Sutherland, though, “virtual reality” isn’t the name he would have used to describe his technology.

“I didn’t give the name ‘virtual reality’ to this phenomenon,” he said. “Jaron Lanier named it some years later — maybe 10. And I’ve always thought it was a rather strange name, kind of an oxymoron. … The HMD that we built at Harvard was neither very real nor immersive. You could look at a small volume, and you could certainly go around it all, but it was just glowing lines hanging in space. There was no substance to the object.”

Glowing lines hanging in space paved the way for technologies like experimental light field cameras, the latest of which was brought in to the end of the panel discussion for a group photo.

After the panelists wrapped their discussion, Google’s Paul Debevec gathered everyone in the room around their latest experimental light field camera — on loan from its place of prominence in the Immersive Pavilion’s VR Village. Debevec asked all to sit very still while the large camera (consisting of multiple GoPros) spun in a circle multiple times to generate a “super three-dimensional virtual reality photograph that can be seen with a 6DoF tracker.”

The six esteemed panelists sat in the middle of the photo, while other VR enthusiasts of all ages and experience levels gathered around them. It was a moment that movingly captured the essence of SIGGRAPH 2018’s “Generations” theme: remembering successful endeavors of our past, the excitement of our present, and the brightness of our future.

To watch the full panel discussion, head to our YouTube Channel. Plus, check out this episode of the SIGGRAPH Spotlight podcast to hear Niantic, Inc. engineers talk Sutherland’s influence on the evolution from VR to AR.