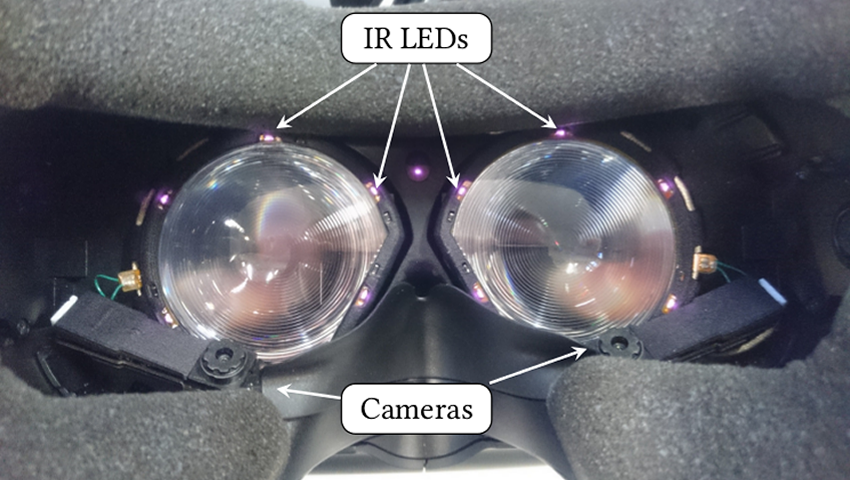 In the burgeoning world of virtual reality (VR) technology, it remains a challenge to provide users with a realistic perception of infinite space and natural walking capabilities in the virtual environment. At SIGGRAPH 2018 in Vancouver this summer, a team of computer scientists will introduce a new approach to address this problem by leveraging a natural human phenomenon: eye blinks.

All humans are functionally blind for about 10 percent of the time under normal circumstances due to eye blinks and saccades, a rapid movement of the eye between two points or objects. Eye blinks are a common and natural cause of so-called “change blindness,” which indicates the inability for humans to notice changes to visual scenes. Zeroing in on eye blinks and change blindness, the team has devised a novel computational system that effectively redirects the user in the virtual environment during these natural instances, all with undetectable camera movements to deliver orientation redirection.

“Previous RDW [redirected walking] techniques apply rotations continuously while the user is walking. But the amount of unnoticeable rotations is limited,” notes Eike Langbehn, lead author of the research and doctoral candidate at the University of Hamburg. “That’s why an orthogonal approach is needed—we add some additional rotations when the user is not focused on the visuals. When we learned that humans are functionally blind for some time due to blinks, we thought, ‘Why don’t we do the redirection during eye blinks?’”

Human eye blinks occur approximately 10 to 20 times per minute, about every 4 to 19 seconds. Leveraging this window of opportunity—where humans are unable to detect major motion changes while in a virtual environment—the researchers devised an approach to synchronize a computer graphics rendering system with this visual process, and introduce any useful motion changes in virtual scenes to enhance users’ overall VR experience.

The researchers’ experiments revealed that imperceptible camera rotations of 2 to 5 degrees and translations of 4 to 9 cm of the user’s viewpoint are possible during a blink without users even noticing. They tracked test participants’ eye blinks by an eye tracker in a VR head-mounted display. In a confirmatory study, the team validated that participants could not reliably detect in which of two eye blinks their viewpoint was manipulated while walking a VR curved path. The tests relied on unconscious natural eye blinking, but the researchers say redirection during blinking could be carried out consciously. Since users can consciously blink multiple times a day without much effort, eye blinks provide great potential to be used as an intentional trigger in their approach.

“RDW is a big challenge since current techniques still need too much space to enable unlimited walking in VR,” notes Langbehn. “Our work might contribute to a reduction of space since we found out that unnoticeable rotations of up to five degrees are possible during blinks. This means we can improve the performance of RDW by approximately 50 percent.”

The team’s results could be used in combination with other VR research, such as novel steering algorithms, improved path prediction, and rotations during saccades, to name a few. Down the road, such techniques could some day enable consumer VR users to virtually walk beyond their living room.

Register for SIGGRAPH 2018, 12-16 August in Vancouver, to hear from the authors themselves!