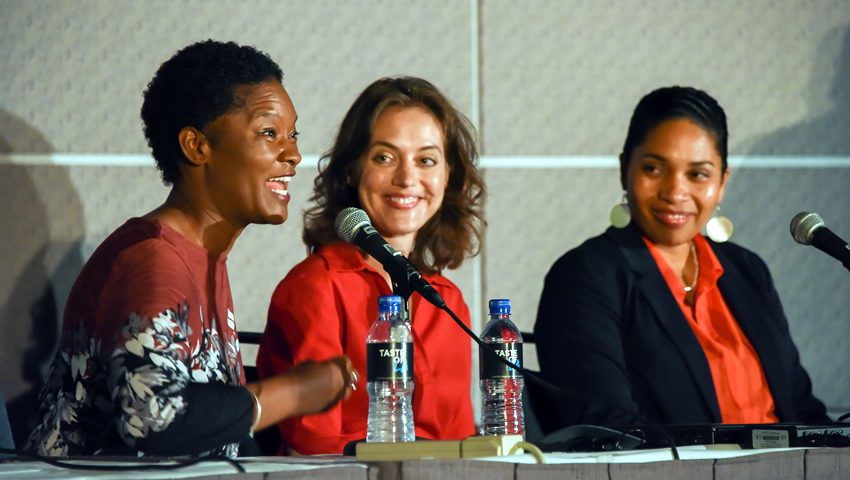 The topic of diversity within the VFX and animation community is one that has gained a lot of attention over the past several years, and even more so over the last year. To that end, I’ve begun to explore diversity within the VFX and animation industry in Vancouver, my new hometown. As part of the ACM SIGGRAPH International Resources Committee (IRC), I have been hosting one of our committee’s most popular events for the past few years, the “Women in CG” panel at the North American conference (started in 2013) and at SIGGRAPH Asia (since 2016). That is why I feel particularly close to this topic.

Vancouver at present is a major hub for VFX and Animation, with over 60 studios making up the industry in this city. It is also the host city for SIGGRAPH 2018, and the place to be right now if you work in animation or VFX. Being new to town, I set out to discover how Vancouver’s VFX and animation community fares when it comes to diversity.

SparkFX Diversity Summit
It was the first sunny weekend after a long bout of continuous rain in February, and this sunny weekend coincided with the SparkFX conference. As part of the two-day conference, a day-long Diversity Summit was offered on the second day. The Summit explored diversity from all angles, though it was heavily focused on women in the industry. The Summit was filled with multiple panels and presentations, all with the aim of discussing “the importance of diversity in the workplace and how differences, rather than separating us, can foster a sense of belonging and community, and where everyone’s experiences and contributions result with the most innovative work possible.”

One of the first things that I noticed when I walked into the lecture hall was a relatively even gender split in the audience. This was different than similar events I have attended in the past. Usually the audience is made up of mostly women. I was encourage to see that several of the men who put their hands up at the Summit were in supervisor roles, and they asked the panelists what they could do to be more accommodating of diversity in their departments.

A big topic of conversation on the day was the “Me Too” movement. The panelists at the Summit believed the movement has brought issues of sexual harassment into the limelight and made women more comfortable to share their stories.

I spoke with Zoe Cranley who is the head of Build at Double Negative in Vancouver and also one of the organizers and moderators at this year’s summit. Zoe was very approachable as a moderator and was passionate about addressing industry issues on diversity and gender parity. She explained to me that she became involved in the event after being a panelist in 2017. Soon after this initial experience, she realized that she knew a lot of women who were interested in contributing to events like this. Zoe believes that support for women is growing in Vancouver and so are available support groups. She is a member of Drawn Together Vancouver, a grass roots group whose mission it is to “empower and advance women in the art, technical and business sectors of the animation industry.“ She also informed me that Women in Animation (WIA) was about to open a chapter in Vancouver (more on this later).

Charmaine Chan was one of the presenters this year. She heads up the Women in VFX project (if you haven’t seen her work, it is something worth checking out!). Though Charmaine is based out of ILM in San Francisco, her presentation at SPARK was too inspiring not to be mentioned here. She has created “A portrait and video series aimed to highlight and advocate the talented women within the visual effects field of film and television.”

During her presentation, Charmaine told us that though we have been discussing these issues for a while, now is the time for action. She believes that in order to see change, we must humanize the industry, have greater transparency (e.g. companies should acknowledge the lack of women in their workplaces), and that women should help other women through organized events and intersectionality.

Though inspiring, Charmaine also presented some concerning statistics on the lack of women in VFX supervisor roles. For example, of all the people nominated in the VFX category at the Oscars this year none were women.

When speaking with her later, she exclaimed that the Diversity Summit was “excellent! I wish this is something we could do at every VFX company. We need to have this topic of inclusion and diversity at the forefront and make it a priority. A lot of it stems from our overall industry standards, which need to be changed as well. But the first step is getting the people who are motivated to see change discussing things, and the summit did just that.”

Overall, I thought the Diversity Summit was a great success. All of the panels and presentations were meaningful and Wendy Rogers spoke very eloquently in her Q&A. Sometimes however, It is difficult to bring a fresh perspective to events of this nature, as they tend to follow a similar format. I felt the summit did a great job not only in the discussion of the important issues we hear about regularly, but also by looking at issues in fresh and interesting ways. The Reverse Recruiting panel was something that stood out to me. It was great to hear from recruiters who discussed (and admitted) that all companies and people can have biases, and what the process can look like to manage these biases.

Women in Animation
Back to WIA. The new Vancouver chapter’s launch was held less than week after the Diversity Summit and had a far greater turnout. I would say it had more than double the amount of attendees, though the majority of people in this audience were women and I saw very few men. We heard stories from three inspiring panelists, including Animal Logic Art Director, Kristen Anderson; Senior Producer on the AAA game FIFA, Sigurlína Ingvarsdóttir; and CG supervisor at Sony Pictures Imageworks, Nicola Lavender. The evening turned out to be a great networking event with drinks and canapes served after the event. WIA Vancouver plans to hold regular events and meetups, and it’s great to know that support for women and diversity in VFX and animation is growing in my new hometown.