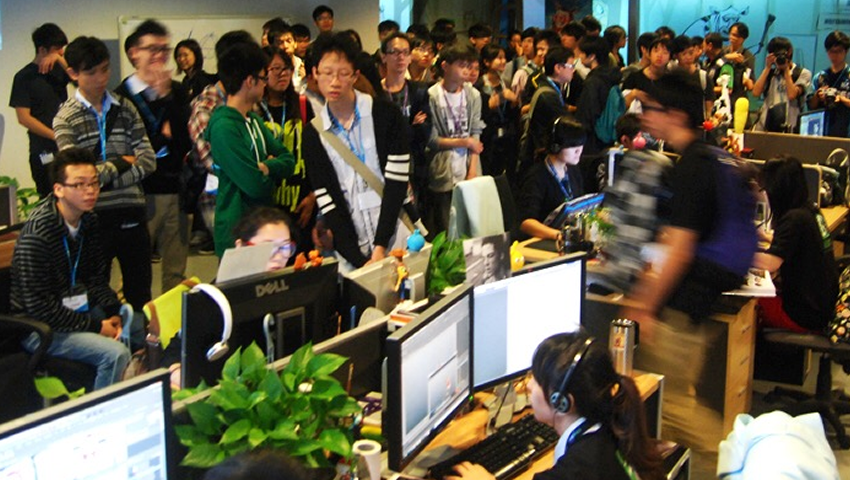 For this Regional Snapshot post, we look into the trends and climate surrounding China’s computer graphics (CG) industry. We were fortunate to speak with a man known to many as “the father of the Chinese CG industry,” Raymond Dennis Neoh. Neoh established the first production house/school, the Institute of Media Technology (IDMT), to make the first fully 3D-animated feature film in China, “Thru the Moebius Strip.”

We also spoke to the ACM SIGGRAPH International Resources Committee’s (IRC) very own Rick Xu. Rick worked with Neoh on “Thru the Moebius Strip” and has been working in China’s CG industry for over 15 years He is also the founder and co-founder of an animation production house and a CG technical company for AR.

“Flashback to 1997, the year Hong Kong returned to China, and I returned from the U.S. to my hometown, Hong Kong. Less than two years previously Pixar’s “Toy Story” had opened up the new frontier of CG animations, and the world of animation was never the same again.  My brother Anthony and I were always interested in new technology and my years of working in the computer graphics industry in the U.S. provided us with the background we needed to build an animation industry in China.  In 1997, everyone in Hong Kong was worried about what was going to happen to this former British colony. People were migrating out of Hong Kong and no one wanted to go and work in China. But we knew that our future would be in this old country with its thousand years of history and very talented people. We decided to build a company that would change the animation industry in China with the latest technology and know-how.”

“In the year 2000 it was a “mission impossible” to make a CG feature film in China because there was a lack of CG animators, a lack of capital, no technology and very few people around the world at the time knew about the process of making a CG feature film. China was totally out of its league.”

“To make the film “Thru the Moebius Strip” (China’s first fully CG animated feature), we built a school. We recruited instructors in Beijing and trained them at Shenzhen University in a broken down classroom. The instructors stayed in a Shenzhen university dormitory which had spiders as big as their hand. That summer, we started recruiting students from all over China and by September we had recruited 150 students.”

““Thru the Moebius Strip” (TTMS) was a multi-million dollar student project. We all believed in making a movie that would define an industry. Not by how much money we would make at the box office, but by how we can make a difference within an industry that we all love and are passionate about together.”

“History has proven us right. TTMS served as a proving ground for today’s animators and their companies. They honed their skills by working on TTMS and they earned their living by working on it.  TTMS provided them with an opportunity to work on a world-class project, but most importantly, the people that we trained and nurtured back then will one day lead and change the industry. That is what TTMS is all about. It’s not just a movie but a belief in the people, a belief that if we worked together we would one day lead and change the industry for us all.”

“Fast forward to 2017. I’m back in this industry and am working closely with Animation World Network. We use AWN’s global platform to accomplish the following:

“In the animation industry, or we can say the multimedia industry in China, it is important to grasp key technologies which will help us move forward. Up until this point, despite having creative ideas and production techniques China still looks inwards rather than looking out to the global market, this is a reason why the industry has not made a lot of progress over the past twenty years. Whether to invest in the industry or a company, it depends on the investor’s’ field of vision, therefore investing in a company is totally different. As the market develops very fast it is critical to keep track of how the industry moves forward. It’s a global industry and you can’t solely rely on inviting foreign experts into the local market to forge milestones. You need to consider the demand from the market and the trend of future development.”

“We need teamwork to push the industry forward and we shouldn’t depend on individuals or companies. Because we  need to accumulate power from the whole industry I work with AWN to set up a platform to accumulate useful resources. When the investor’s idea is same as the founder, the target will be achieved soon.”

“However if you want to invest this industry, you need to consider the system of the industry. Most employees in the Chinese animation industry are from art schools and lack a technical background. In the U.S., the creation process is closely linked with technology, and the industry is treated as a technical one. in China, it is regarded as a creative industry. If we don’t connect creativity with technology, it will be difficult to surpass the US. We still don’t know who will initiate this change; we will have to wait and see.”

“It’s hard to elaborate on the trends within China’s CG industry, but we have seen the great mass favor of IP development, VR development, and more and more relaxed investors and producers when it concerns movie production for children. I can only assume in the future the market will become more mature and the key people in this industry will be calm and have wisdom. More and more people will cooperate on a global level, helping to promote the local industry as well.”

“With the developing economy in China, the job environment is getting much better than when I started IDMT. It’s a positive direction. The company owners like to invest in hardware for production. Actually, I saw some of the students’ studio and their equipment is even better than what I saw overseas. However, we still need to consider how to improve the soft power, like R&D, and encourage more high-tech people to enter this industry.”

Rick Xu, Neoh’s protege, provides us with his views on the topic at hand. Rick has many similar viewpoints to Neoh and believes that the CG industry in China now is getting bigger than ever, and that CG technology is not limited to animation production, but also is opening to other projects, such as VR, interactive apps, drones, and other creative and technical areas.

Xu elaborates, “Since VR is increasingly popular for investors, a great number of animation studios and game production houses have shifted their direction to VR content production. This not only helps them to gain more revenue but also provides them with an opportunity for further investment. This was especially the case in 2015-2016.”

Xu believes that even though the variety of jobs available in this industry is greater than ever, mobile game artists “have less opportunity to be hired because investment in this field is saturated.” He also feels that in 2017, due to the quantity of animated feature film under production in China, the industry is lacking the human resources to complete these projects.

Another trend noticed by Xu is the increased use of real-time technologies by most production houses. These studios are using game engines as a production tool in feature animation as a cost reduction method. Studios are also trying to harness motion/facial capture, 3D scanning, and GPU rendering to help with cost reduction.

Xu believes the industry overseas are now entering a second phase which greatly impacts Asian countries like China. This can be seen through the closure of large foreign production houses like Oriental Dreamworks. However, “We see new large studios emerging, such as BaseFX, that are working on a Chinese-themed animated feature film which will be launched in the Chinese market. This venture will be another try for a foreign production house to enter the China CG industry.”

Xu sums everything up by saying, “Artists in China are now more professional than ever before, but still can’t finish a film or game with the same quality that U.S. companies do. Therefore, most of the production houses who have larger investments are willing to hire professionals from the U.S. or set up an overseas division in the U.S. Artists in those studios will have a good chance to learn from foreign artists.”