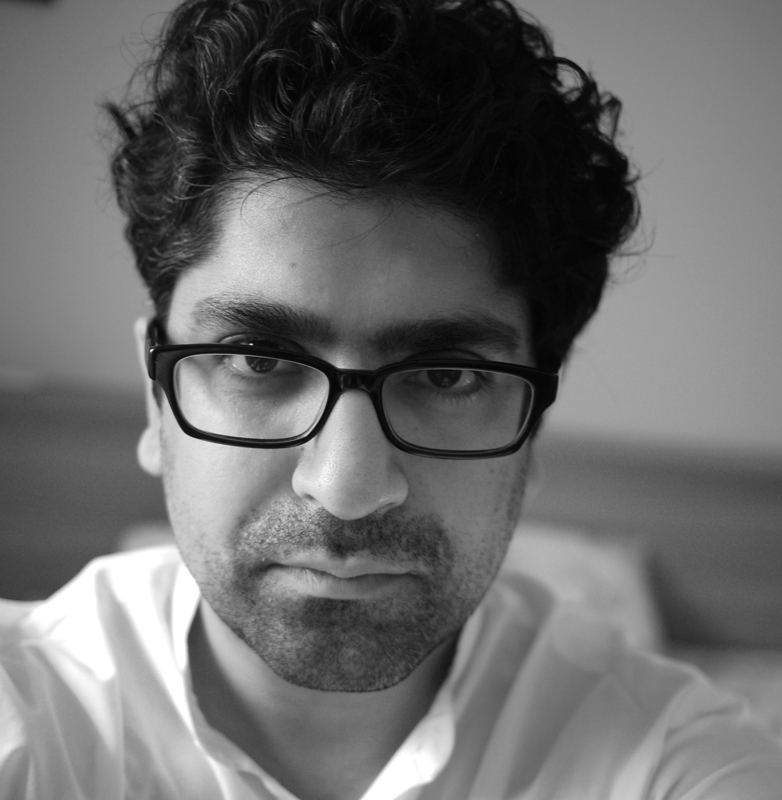 SIGGRAPH 2012 Art Gallery: In Search of the Miraculous presents exceptional digital and technologically mediated artworks that explore the existence of wonderment, mystery, and awe in today’s world of mediating technologies and abundant data. Of the nearly 400 submissions, 12 were hand-picked by a jury to be exhibited at SIGGRAPH 2012, 5-9 August at the Los Angeles Convention Center. The jury included a wide range of artists, designers, technologists, and critics hailing from academia, industry, and the independent art world.

“The Art Gallery call for submissions was purposefully ambiguous, based not on any particular thematic premise but rather on sentiment—simply an open call for works inflables that both inspire or are inspired by moments of awe, surprise, mystery, and wonder,” said Osman Khan, SIGGRAPH 2012 Juried Art Chair from the University of Michigan.

“Interestingly, in an ubiquitously digital world, many of this year’s submissions move toward the physical and analog, not in a turn toward ludditery [many projects are quite technically complex], but perhaps as a reflection of a pervasive ennui of the digital.” 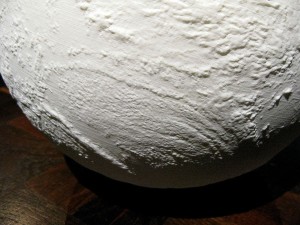 A Planetary Order is a terrestrial globe depicting clouds from a single moment in time. The globe itself is a physical visualization of real-time scientific data.  To create the work, Callanan took one second of readings from all six cloud-monitoring satellites currently overseen by NASA and the European Space Agency and transformed the information physically into outlines and profiles of the clouds that were emerging at that moment across the surface of the Earth.  The shimmering white cloud globe freeze-frames the entire operation of the global atmospheric regime and highlights the fragility of the environmental (and informational) systems that operate across the world.

Art Gallery Chair feedback on this piece: “In what at first may look to be a common Earth globe, Callanan’s A Planetary Order makes a poetic statement by shifting our attention scivolo gonfiabile from the usual geographic information by voiding the usual terrestrial markings, and instead presents an immortalized ephemeral instant, eternalizing a fleeting moment shared by the global whole, giving us pause to reconsider what really matters in this world.”

Kapitän Biopunk: Fermentation Madness is an artistic research project manifested via a series of workshops and an acoustic and performative installation. The project developed in response to the high number of poisonings and deaths of alcohol consumers after an increased excise tax was placed on alcoholic products in Indonesia. The project, using do-it-yourself and open-source technologies, strives to educate individuals on fermentation processes to produce safe and affordable alcoholic products, and a means to democratize the laboratory and liberate knowledge for a wider society.

Art Gallery Chair feedback on this piece:  Abraham’s Kapitän Biopunk combines the aesthetics of a mad chemist’s lab with Dionysian song and (literal) spirit. Though the work uses a simple mediation (Putting microphones on the fermenting jars), the resulting cacophony of bubbling sounds, a by-product of the fermentation process, is both amazing and amusing to hear. 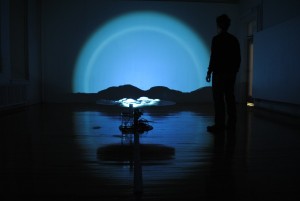 Alejandro Borsani’s 90° South provides a contemplative point of view that allows the viewer to witness and be immersed in the constant evolution of a growing landscapeinflatable waterslide canada. The work utilizes an irrigation system in conjunction with a highly absorbent material (sodium polyacrylate) to produce a slowly emerging landscape. A thin layer of the white material is placed on top of a round surface. When water reaches the surface, the sodium polyacrylate expands 300 times, producing subtle undulations. The profiles of these miniature mountains are projected onto the walls of the gallery using a flashlight attached to a rotating mechanism.

Art Gallery Chair feedback on this piece:  Like Calvino’s fictional cities, Borsani’s 90° South presents an imagined landscape, replacing Calvino’s urban constructs of the Antarctic. As real as any dream and as much a fiction as any photograph, 90° South rekindles—especially in this heavy mediated and imaged world—the wonderment and magic found in the idea of imaginary places. 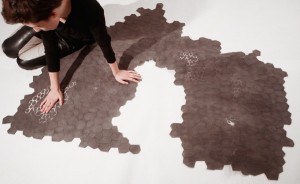 SymbiosisS is part of a collection of textile interfaces, SymbiosisO (“O” for objects), which behave as organic displays and react to definable impulses by showing pre-defined patterns that animate slowly over the surface. It welcomes viewers to sit and rest on soft-folded material that displays an active, slowly shifting pattern. When excited, the pattern starts forming, in a playful, curious way, around the place where the textile was touched. Once the disturbance is abated, the pattern continues its peaceful expansion. This vivacious interaction of a vibrant pattern is a demonstration of the potential for tangible textile interfaces. Ubiquitous computation—an active, programmable secondary skin to surround everyday objects—is an ambient, “noiseless,” and thus vigorous way to visualize information and form space.

Art Gallery Chair feedback on this piece:  In letting users leave traces of their hands and bodies via heat sensitive thermochromatic dyes, SymbiosisS mediates and amplifies the conditions of its own use.  Echoing our impulse to leave our mark, the handprints found at the Lascaux caves comes to mind, and in its network of conducting thread, a nod to social networking, interacting with SymbiosisS subtly aestheticizes unique temporal moments of individual and social interactions. 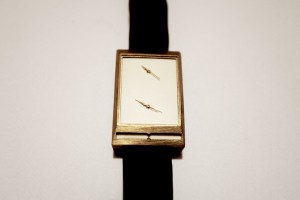 Stretching or shrinking hours at the beat of your heart, The HeartBeats Watch is a timepiece in which the duration of time is paced not by seconds but according to the wearer’s heartbeat.  Through a heightened awareness of self, The HeartsBeats Watch brings together art and science to reveal emotional complexity of time  and the human body. A poetic investigation of the physiology of emotions, health, immortality, and control, the watch bridges the gap between society and medical science, invoking a broader cultural perception of life.

Art Gallery Chair feedback on this piece:  The work was inspired by love; in LeGault’s words “time slows when I’m with you, and time flies, and time stops with every heartbeat.” By relating our ticking mortality with the eternal mechanisms of time, LeGault allows for a profound reflection on our understanding of and connection to time. 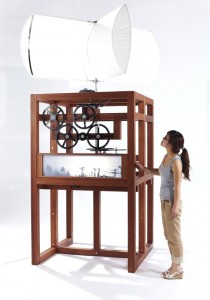 The wind-powered Sustainable Cinema No. 4: Shadow Play is a kinetic public sculpture that harnesses sustainable energy to generate a moving image. By using natural power to re-create an early art form that led to the beginnings of cinema, the sculpture references the histories of both motion pictures and industrialization. It explores a possible future of environmentally responsible media; looking forward by looking back.

Art Gallery Chair feedback on this piece: Hessel’s Shadow Play, wrapped in a pre-cinematic nostalgia, ideas of sustainability and especially in context of the digital heavy SIGGRAPH conference, presents an alternative retro-futuristic version of the moving image. Go Windpunk!