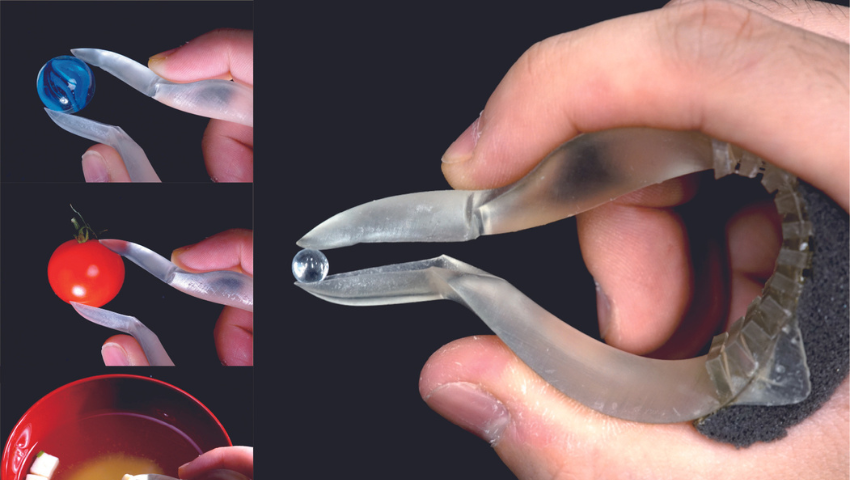 Inspired by the shape of a New Caledonian crow’s beak, Takahito Murakami and a team of researchers from the University of Tsukuba, Research and Development Center for Digital Nature, created and studied a new 3D-printed prototype of tweezers called “Kuchibashi.” The group showed the prototype interacts better with large spherical objects than hands or conventional tweezers do, and their project was named Undergraduate Division Winner of the ACM Student Research Competition.

Here, Takahito talks about the inspiration of the beak, the study used by his team to evaluate Kuchibashi’s security and safeness, and more.

SIGGRAPH: Congratulations for winning the Undergraduate Student Research Competition at SIGGRAPH 2022! Please take us back to the beginning of Kuchibashi. As part of a student team, why did you choose to work on this project?

Takahito Murakami (TM): Thank you. This project originally aimed to fabricate a prosthetic finger for picking up small objects such as peanuts. As the research progressed, we discovered that the New Caledonian crow uses its beak like human hands to grasp objects and use tools. After trial and error, we were able to implement the shape of the crow’s beak to the prosthetic finger and eventually ended up in tweezers.

SIGGRAPH: Your team conducted a study to evaluate the usability of the new tweezers. What did you learn from that study, and how did your Kuchibashi prototype compare to human fingers and conventional tweezers?

TM: We compared the usability of Kuchibashi with different-sized beads. We found out that while conventional tweezers had the best performance for small beads and that human fingers worked best for large beads, Kuchibashi had good performance when working with both small and large objects. As an exception, Kuchibashi had difficulty picking up very small objects.

SIGGRAPH: Your mentioned that Kuchibashi’s shape was inspired by the beak of a New Caledonian crow. Can you share how that inspiration occurred?

SIGGRAPH: How were you able to replicate the crow’s beak in the prototype’s design?

TM: The shape was reproduced by CAD design software from CT images and descriptions from previous study.

SIGGRAPH: What was the most challenging aspect of conducting or analyzing your study?

TM: We spent a lot of effort in determining the design of the prototype. We had to consider not only the tip where the New Caledonian crow’s beak is adopted but also the grip design. We tried different prototypes and had many discussions.

SIGGRAPH: As a student, what are you most interested in learning about and exploring in the computer graphics field?

TM: Computer graphics is important not only for visual expression, but also for actual manufacturing using computers. I look forward to exploring engineering and making things combining simulation and fabrication.

Until 31 October, you can still experience SIGGRAPH 2022 on the virtual conference platform! Access some of the best content recorded in Vancouver, hours of on-demand content, the latest research from Technical Papers, Art Papers, and Posters, and more.

Takahito Murakami was born in 1997 and is an undergraduate at the University of Tsukuba’s School of Informatics. In 2021, he joined Digital Nature Group and the National Institute of Advanced Industrial Science and Technology, Media Interaction Group. His interests include human-computer interaction (HCI), human augmentation, acoustics holography, photography, and product design. Takahito’s artwork was selected for ISCA 2018 in Japan, and his current research focuses on artificial hands in the field of digital fabrication and acoustics. View his portfolio.