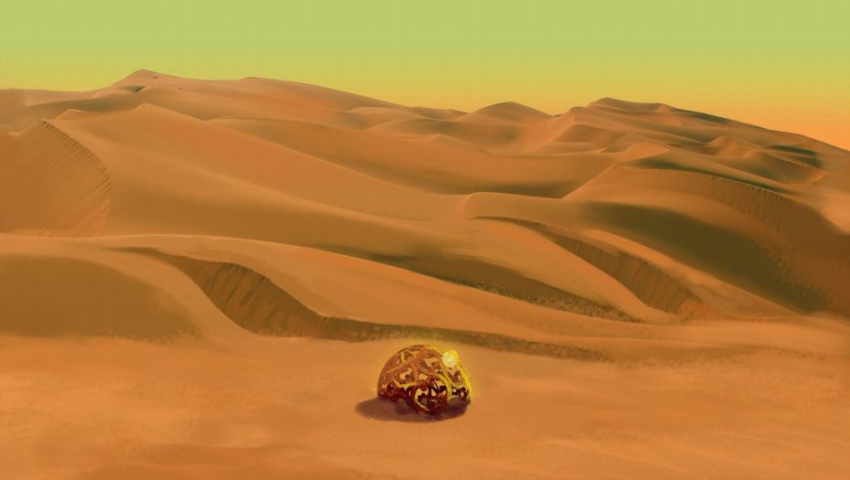 When SIGGRAPH participants access this year’s interactive VR Theater lobby experience, they will be transported through a fantastical interpretation of Morocco. This mystical world takes users on a journey from the middle of a vast desert environment to the top of a minaret tower, overlooking a vast terrain full of Moroccan landmarks: towers, architectural structures, terraces, and rock formations. (For more background on this project, check out “The Making of ‘Tahul’ – Part 1”.)

In the first part of this series, we looked at the final product and the team behind it, introducing the ambitious students from Savannah College of Art and Design (SCAD) who dedicated their time and talents to bring this experience to life. For part two, we’ll chronicle the different stages of this fruitful collaboration between SIGGRAPH 2020 and SCAD.

First, we’ll examine the context of the collaboration from an educational perspective and how it fits into the students’ curriculum. Subsequently, for those interested in the process of VR content creation, we’ll share insight into the design and development process. We hope that you enjoy this look behind the scenes, which gives an impression of the work that has been put into the different aspects of the final VR Theater lobby experience originally planned for this year’s in-person conference and now designated to be made available to virtual participants.

Undoubtedly, a key factor in the project’s success was the support of Professor Aram Cookson and Professor Manuel Prada, who championed the cause at SCAD. From the beginning, they invested great care in the selection process, in order to ensure that the students would bring the right combination of skills to the table. Furthermore, their involvement ensured that the project was tightly integrated into the students’ curriculum.

Students typically have one senior project as part of their curriculum, which usually takes about three academic quarters to complete. In this case, due to the strict constraints of the conference schedule, students only had two quarters. Aside from managing time, it was also important to properly recognize and reward the students’ efforts. Once students successfully went through the selection process, there were several ways in which their participation could count towards the completion of their studies. In particular, they had the option of submitting their work as their senior project, or receiving elective credits if they preferred to additionally realize their own, separate senior project. Another key motivation for students was the opportunity to practice their skills and round out their portfolios through participation in a high-profile project.

Conducting projects with real-world clients presents a unique opportunity for students to gain professional experience. Compared to typical student projects, they often present a more realistic setting with client coordination and expectations, which ideally challenges students and promotes their growth. “Every time we made a decision, it was not just, ‘Oh, we like that, we’re good.’ It was, ‘Wait, does this meet the ask?’,” shared Cookson. He continued, “If we weren’t sure, we would bring it back to the client and present it to them.” A similar sentiment was expressed by Prada: “It’s definitely a situation where [the students] have to learn, very quickly, to be very invested and very meticulous about their work — and then detach themselves from it.”

Most students had to balance the project while concurrently completing a full load of coursework. Furthermore, for some of the students it was their first time working on a VR project. It truly speaks to their talent, that they were able to acquire the necessary skills and deliver such a polished experience. As Prada put it, “It was remarkable to see what they could produce in a very short amount of time.” And, in particular, “seeing some people fill gaps and expand their skill set to areas where they really had no skill before in a very, very brief amount of time […] was very gratifying.”

As discussed in part one, the lobby environment’s primary purpose was originally to grant SIGGRAPH 2020 participants a seamless experience from theater to headset to showcase, so several requirements had to be kept in mind. From the beginning, the VR Theater subcommittee was inspired by the SIGGRAPH 2020 conference theme, “Think Beyond”.

Early on, a decision was made that the VR Theater space would be designed with a Moroccan theme, incorporating artistic and cultural perspectives beyond those commonly presented in Western media. Consequently, one of the creative prompts for the VR Theater lobby was to take inspiration from this concept. In line with the conference theme, the goal was to create an experience that is “interesting, magical, surreal”.

Keeping guest diversity in mind, age range, as well as familiarity with VR must be accounted for. As some participants may be experiencing VR for their first time, their expectation may be to treat the lobby as they would a prologue to a movie: a passive, non-interactive scene that requires no movement or determining action on their part. Complex, interactive elements, such as sequences of movements and triggers for a single result, or “events” that require player input to progress could impede the continuation of the project and therefore diminish the experience.

Based on the initial creative prompt and requirements, the students split up into four teams and developed four distinct concepts, which were presented to members of the VR Theater Subcommittee. All the concepts developed by the students showed great promise. Even at this early stage, the students’ ambitions were clear and the diversity of ideas as well as attention to detail displayed in the proposals was impressing. The galleries that follow showcase a selection of early concept art from the different proposals. Ultimately, due to the constrained project scope, some of the ideas inevitably had to be cut; however, the work is a treasure trove of ideas and concepts that will hopefully be fully explored in the future.

The proposals not only included detailed descriptions and concept art for the different scenarios, but also examples of interactions and gameplay mechanics afforded by the different environments. In accordance with the provided requirements, interactive elements were generally designed to be optional, allowing the player to playfully explore and discover the environment, while waiting for the start of the seated VR Theater program.

Upon being presented with these concepts, the subcommittee ultimately had to face the difficult decision of selecting one concept that the team would develop further. After extensive debate and deliberation, based on the compelling pitch and various practical considerations, the choice fell on “Tahul”. This initiated the next phase of the project, where it was time to start bringing the concept to life.

The team experimented with different styles, each with custom assets and shaders in order to determine the look and feel of the final experience. As with the initial concepts, the students were divided into groups and developed multiple proposals. Another round of selection was conducted in coordination with the VR Theater Subcommittee to select the style that was best suited to realize the vision of a fantastical, Moroccan-themed environment.

The styles, which were inspired by a variety of video game art and visual artists, varied in their use of assets, textures, and effects. All proposals incorporated some form of stylisation, aiming for varying degrees of photorealism. For instance, one intriguing proposal relied on cell-shading to evoke the look of famous comic book artists, while others incorporated graphics techniques that were closer to reality, such as physically based materials.

This presented the subcommittee with another difficult choice to make, since the proposed styles were so varied and each one was compelling in its own right. In the end, after a fair bit of internal debate, the decision was made to proceed with a style that was inspired by the game “Overwatch” from Blizzard Entertainment. As can be seen in the “Style 1” figures above, this concept placed an emphasis on color, lighting, and materials, while the models themselves were not too complex, making it well-suited for a VR experience.

The Moroccan theme that was stipulated in the creative prompt provided a rich historical and cultural backdrop for the team to explore and draw inspiration from. In the course, they immersed themselves in Moroccan culture and tradition, for instance by exploring the use of colors, their symbolism and meaning. This attention to detail resulted in a very cohesive and deliberate design, that respectfully integrates and celebrates its real-world references.

Another key influence was Zellij mosaic tilework, a form of Islamic art which is one of the main characteristics of Moroccan architecture. As documented in the students’ process book: “The use of Zellij reflects the structure of Moroccan architecture well. There is a heavy emphasis on repetitive geometric shapes, coming together to create circular patterns. In all patterning, tilework, and structures, repetitive form is crucial.”

As the figure above suggests, the mosaic patterns were used as the base pattern for the level layout. From there, it became a matter of extruding heights and sections of the pattern, while maintaining the center piece as the player position. In this way, the team tackled the issue of creating the main layout of the environment itself. Heavily influenced by Zellij, they were not only able  to incorporate the Moroccan theme fully within the environment (and keep it fantastical), but to also take the 360° nature of VR into account. The resulting environment follows the structure illustrated below as a level design.

There is a lot more that could be said about this compelling world and project. For instance, at all steps, the student team went out of their way to meet the high requirements in terms of accessibility and comfort that VR Theater Subcommittee requested. Similarly, the team competently handled the various technical challenges involved in the creation of a VR experience, devising and implementing workflows for optimization, content creation with modular assets, and deployment.

At this stage, I believe it is time for you to experience this creation yourself as an attendee of the SIGGRAPH 2020 (virtual) VR Theater. In the words of Marina Harrison, one of the team leads, “I hope you enjoy the world my wonderful team has created and encourage you to explore every nook and crevice!”

Thank you for reading, and from everyone involved in the VR Theater, we wish you a fantastic conference! Register here.

Daniel Filonik is a postdoctoral fellow in high performance visualization at the EPICentre, University of New South Wales (UNSW) Art and Design, Sydney, Australia. His research interests are in information visualization, computer graphics, and human-computer interaction. In particular, his current work focuses on developing natural interfaces for interactive data exploration in immersive environments.