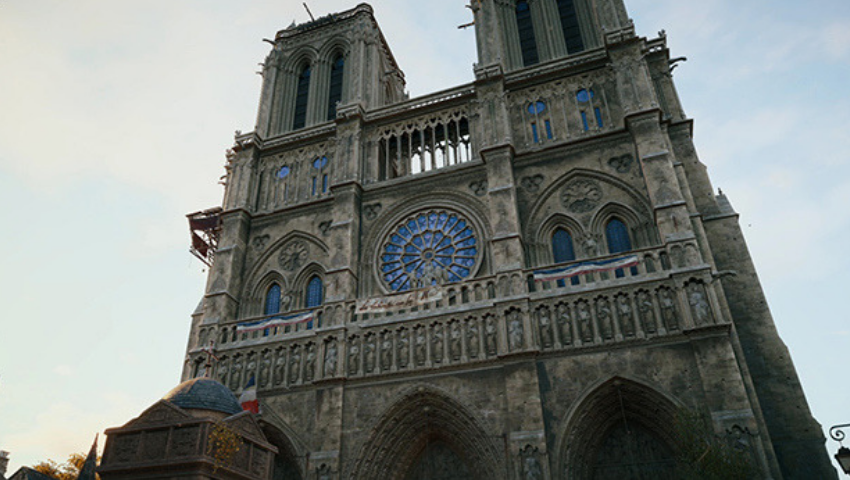 Republished with permission from Ubisoft News
All images from “Assassin’s Creed Unity” courtesy of Ubisoft.

Following the recent fire at Notre Dame Cathedral in Paris, people across the world united in shock, sharing memories across social media. Whether you have seen the iconic cathedral with your own eyes, through pictures, or via the small or silver screen in a film or video game, Notre Dame has awed visitors for hundreds of years. As Paris looks to rebuild this historic landmark, our team connected with Ubisoft, creators of “Assassin’s Creed Unity,” who, after news media began to speculate that their artists might lend expertise for the reconstruction, have offered the Paris-centric game for free (amassing 3 million downloads) and donated 500,000 euros to the reconstruction effort. Originally published on Ubiblog in 2014, we’ve revisited an interview with Caroline Miousse in which she recaps how the team re-created Paris — and Notre Dame — for the game.

Paris has some of the most recognizable landmarks in the world. The Eiffel Tower (yes, the Eiffel Tower is indeed in the game). The Louvre. Notre Dame. You see each of these exquisite examples of architecture and instantly know exactly what they are. Because the Parisian skyline is so iconic, the development team realized they needed to pay special attention when building the world in “Assassin’s Creed Unity.” It needed to be accurate, yet it also had to feel familiar.

Take the Notre Dame, for example. Architecture aficionados may notice the in-game version of the cathedral isn’t exactly as it should have appeared during the French Revolution. So why did the art team make the call to alter it? We talked to Caroline Miousse, senior level artist on “Assassin’s Creed Unity,” about what it was like to re-create Notre Dame in the game (despite having never actually seen it herself!) and why certain key choices were made.

Ubiblog: You had never actually visited Notre Dame while you were re-creating it in the game. How did it feel to finally see it after working on it for years?

Caroline Miousse (CM): It’s incredible, for sure. It was just… Oh my god, so beautiful. At the same time, it was a strange feeling because I felt like I was going home. I know it so well because I studied Notre Dame so much and everything I was looking at was so familiar. It was a lot of mixed emotions. I’ve been calling it my big monster baby. I wanted to just pull up all the wireframes and play around with them.

Ubiblog: Having never seen it before, what sorts of references did you work from?

CM: We were able to find a lot of blueprints showing us exactly how Notre Dame was constructed. [Maxime Durand, “Assassin’s Creed” historian] helped me a lot with it because he has the historical background. I have tons of books, too. Google was also my best friend for a while. You can just find so much stuff on the internet now.

But it also really just helped me a lot to talk to people. It’s very difficult to take a big picture of Notre Dame and capture every single detail. You really have to take a bunch of pictures of everything and put them all together like a puzzle. I can re-create every single little detail of Notre Dame, but I also want to talk to people who have been there so I can know what it’s supposed to feel like. That’s a very important part of making sure I do it justice – getting players to feel the right emotions when they see it in the game.

CM: The spire is one of the big, immediately noticeable changes. We don’t have a ton of information about the original spire because it came down in the 18th century and was later rebuilt into what we know today. It was made with wood and, honestly, it wasn’t very sexy. I don’t think the fans would have had as much fun with it. Notre Dame is kind of a key point of the Paris skyline. You see it and can recognize it immediately, and part of that is due to the massive spire. The two towers are recognizable too, but the spire is the tallest point of Notre Dame and we didn’t want players to miss out on the opportunity to climb it and see Paris from the very top.

From a gameplay perspective, we had to change the inside a bit just to add several layers of navigation. It’s not enough to simply re-create the monument. People need to be able to have fun when they play around on, and in, it. We’re making a game. It has to be enjoyable. It was very important for us to adapt a monument like Notre Dame into a positive gameplay experience so the players can have some truly incredible moments.

We added things like cables and incense across the second level of Notre Dame so players would be able to move around easier when they’re above the ground. I also think it adds a personal touch to the monument. I’ve left my little mark on a few parts of Notre Dame and there’s something remarkable about that. There’s a nice, unique flavor that only fans of “Assassin’s Creed Unity” will ever have a chance to experience. There’s a little bit more fantasy to our Notre Dame, and I think that’s kind of cool.

Ubiblog: What sorts of personal touches did you add to make it yours?

CM: I call it my bling bling! You’ll see some flashes of gold and color when you wander around, and all these are little pieces of me and my tastes. In the beginning it was stressful. I didn’t want to screw it up. People know Notre Dame. It’s in so many movies and almost everyone can recognize it. It’s like New York City. Everybody knows New York City.

But I still wanted to add those personal details. For me, it’s like a cover of a song. You might be singing the same song, but it’s going to be your interpretation. This is my cover song. I put my own taste in it.

And, on an even more personal level, most of the fans think it’s all men working on this project. So adding these little feminine touches is just my way of saying, “Yeah, I’m a woman, and this is mine. I did this and it’s awesome.” That’s just the way I see it.

Ubiblog: Did you encounter any problems while you were working on the re-creation?

CM: When we started the research portion of the process, we had to be sure to investigate all the legal aspects. There are certain things we were actually unable to directly re-create due to copyright issues.

But we chose not to see this as a negative. For example, when I look at the organ in Notre Dame, I think it’s a masterpiece. It’s just so huge and beautiful… and copyrighted. We couldn’t reproduce it exactly, but we could still try to nail the feeling you get when you see it. We kept it very similar in general appearance, and it’s only when you get close to it and really analyze it that you realize it’s not the same exact organ you would see in Notre Dame today.

So the copyright actually gave me the chance to be more creative with it. I needed to keep the feeling and the emotions, while making sure it was still recognizable. It gave me the opportunity to create something new from a starting point that people know and understand. It was a very interesting challenge and I had a lot of fun with it.

Ubiblog: If you had to choose a favorite part of Notre Dame in “Assassin’s Creed Unity,” what would it be?

CM: I actually have two different answers. The first is the big stained glass portal. The feeling I had when I re-created it was the same I had when I saw the real thing for the first time, and that’s how I knew I got it right. It’s just so peaceful and so beautiful.

But my second favorite part is absolutely the spire. This is something I’m very proud of because it was incredibly challenging. It’s easy to say, “Oh, she just re-created it. What’s the big deal?“ But we had all kinds of rules to follow and aspects of navigation to smooth out. We’re not just re-creating something for looks. It has to be functional. It needs to be accessible to the player. To get the spire looking the way it does today and then add all those technical aspects was very difficult. I am so proud of how it turned out. I made that. It’s awesome. I hope every single person who plays the game takes the chance to climb to the top. The view is amazing up there.

This article was originally published on Ubisoft’s Ubiblog. Read the original article here.