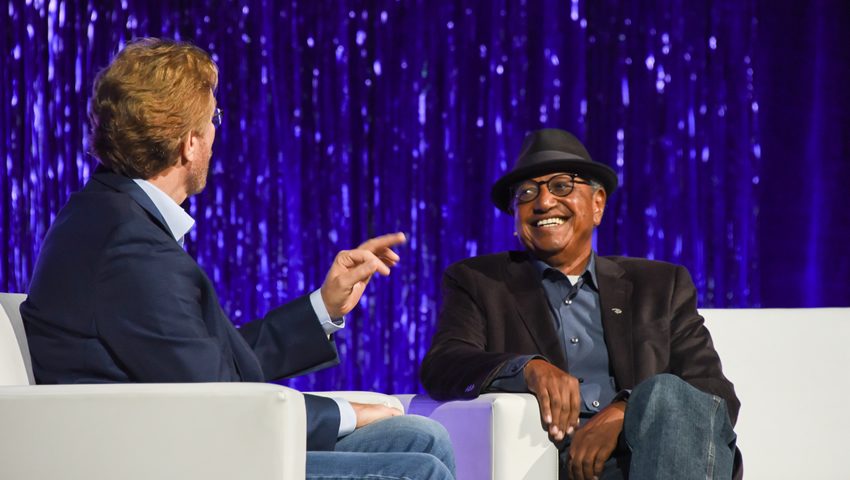 photo of Steve Waskul and Floyd Norman, courtesy of John Fujii for SIGRRAPH 2017

On Monday, 31 July, SIGGRAPH 2017 attendees heard from Floyd Norman, conference keynote speaker and the first African-American storyboard artist at Walt Disney Animation Studios. Norman participated in an in-depth discussion with Steve Waskul (of StudioXperience), and gave attendees a behind-the-scenes look at his career with Disney, what motivates him today, and key advice for new animators.

Early Career
When Norman started working in animation, the profession was not considered a “real profession” and people would often say, “Have you considered a real job?” However, his parents, and especially his grandmother, were supportive and his grandmother even helped him build his first animation stand where he made cartoons in high school. In the early days, there were hardly any books on animation. For the most part, Norman and his future colleagues taught themselves.

Norman’s animation education didn’t really begin until he was hired at Disney in 1956. At the time that Norman started, the studio was a lot smaller than it is today and was working on small-scale projects, with television, live action, and theme parks in the periphery. But for Norman, he was just another kid looking for a job because he loved animation and filmmaking.

Advice to New Animators
During Norman’s time working with Walt Disney, he recalls his boss constantly telling the young team, “Don’t watch the movie, watch the audience.” Norman would see the films he made mainly because he wanted to know if his work was connecting with the audience and resonating. The best way to know if a film is working or failing is based on an audience’s reaction or non-reaction, and the best feeling in the world — to Norman — is when a choice you made makes an audience laugh.

Norman continues to learn from the Disney classics that he saw as a child, which continue to teach animators today because there’s no waste and no excess. Walt Disney was a great story editor because he knew exactly what to leave in and what to take out.

More Highlights from the Keynote

Norman continues to look forward to his next chapter and remains excited about the animation business, just like he was when he first came into the business in the 1950s.