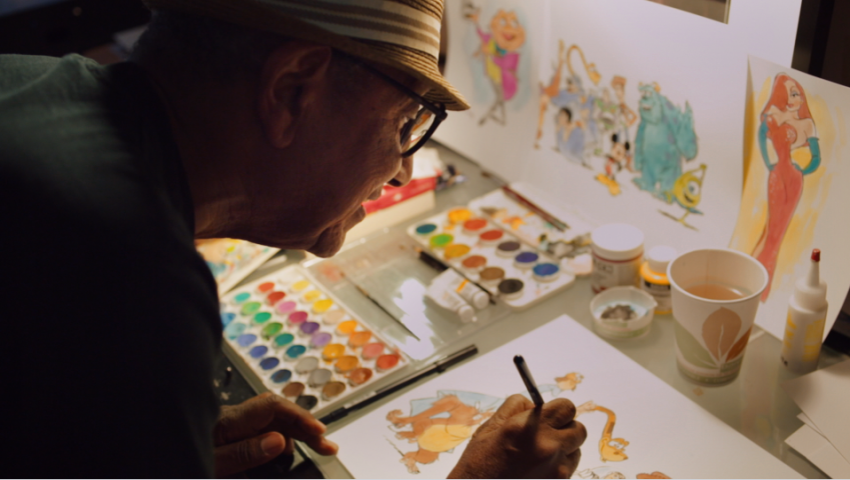 On Monday, 31 July, Disney legend Floyd Norman will address attendees in a very special keynote session during SIGGRAPH 2017. Don’t miss your chance to hear from Walt Disney Animation Studios’ first African American animator as he discusses his life and career with Steve Waskul (or StudioXperience) in an intimate interview setting. In anticipation of this exciting chat, we sat down with Norman to learn a bit more about what makes him tick after all these working years.

SIGGRAPH: What was your impetus to become an animator?

Floyd Norman (FN): I loved to sketch and paint when I was a kid, so a career in art seemed natural. In time, my love of movies led to research on how films were made. Storytelling and art were a perfect match — and animation combined both. By the time I reached middle school, there was little doubt in my mind that I would one day become an animator.

SIGGRAPH: Who have been your biggest influences?

FN: Way too many to list. Naturally, the great Hollywood live-action filmmakers were a huge influence on me along with the novels I read as a kid. Then, there were the animation filmmakers such as Walt Disney, Max Fleischer, and the early Warner Bros cartoon directors. By the ’50s, I had become a huge fan of UPA (also known as United Productions of America) and the design aesthetic of the mid-century. The influences were everywhere and I soaked them all up.

SIGGRAPH: What advice would you give to a young animator just starting out?

FN: That depends on what you plan to do as an animator. Back in my day, it was always about learning to draw and becoming a better artist. In today’s digital world that doesn’t seem to matter as much; however, I would still recommend improving your drawing skills as well as observation. I often caution young animators not to focus too narrowly: Don’t be an expert on one particular thing. Study everything. This knowledge will inform everything you do throughout your career.

SIGGRAPH: Do you have a favorite SIGGRAPH memory?

FN: My favorite SIGGRAPH memory was buying a coffee mug from a little graphics company called Pixar. They couldn’t even afford a booth and were set up in a tiny kiosk in the middle of the show floor. I still have that coffee cup today and Pixar Animation Studios has since become a hugely successful animation powerhouse.

SIGGRAPH: What’s one thing people would be surprised to learn about you?

FN: When I was a kid I was terrified of speaking in public. Plus, I had an annoying stammer and often could not even form certain words. I avoided any speaking occasion and often sat silent in school classrooms. Today, I speak at colleges and universities across the country and I’ve even spoken at Apple, assisted by Steve Jobs’ team. I’m proof that you can overcome even your greatest fear.

Join us this summer and hear from Floyd Norman in person! To register for SIGGRAPH 2017, click here. There will be a screening of Norman’s new documentary “Floyd Norman: An Animated Life” during the conference — stay tuned to s2017.SIGGRAPH.org for details.