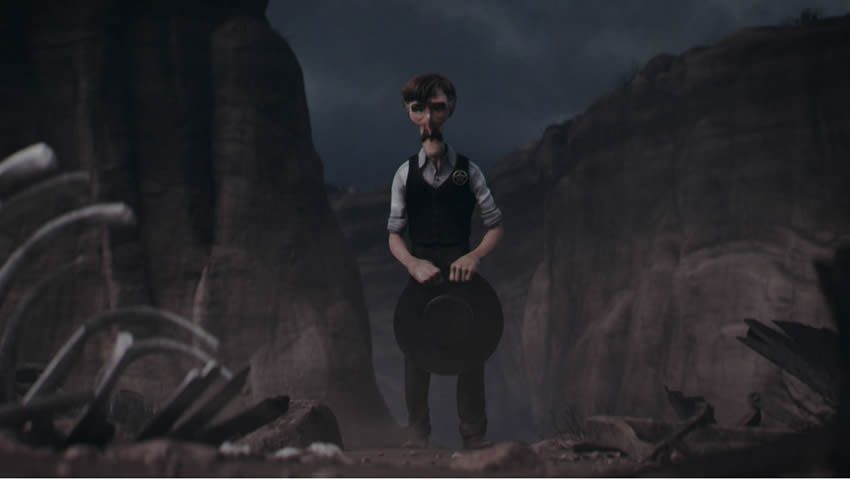 This summer, the 43rd annual SIGGRAPH Computer Animation Festival awarded the animated short “Borrowed Time” its prestigious “Best of Show” award. As the end-of-year awards season approaches, our team sat down with the film’s directors to learn more about their filmmaking process and what advice they have for aspiring animators.

“When you’re at the darkest, lowest moments and want to give up: Show people your film and get different perspectives.”

SIGGRAPH: Tell us a bit about who you are and the inspiration behind “Borrowed Time.”
Lou Hamou-Lhadj (LHL): We’re just two kindred spirits who met under unlikely circumstances in school. Andrew was
a senior when I was a freshman, and though he was on his way to graduating, we naturally connected in our shared passion and hunger for film, animation, and storytelling in general. We had worked on each other’s student films a bit and found that we shared similar sensibilities, so it was only natural that the next step was to make a film together.

Andrew Coats (AC): Right out of school, I went to Blue Sky Studios as an animator and Lou went to Pixar as a technical director (character modeler and rigger). We brainstormed a few ideas but ultimately decided to wait until we were both in the same place, since there was no good or reliable way to work remotely together back then. Luckily enough, I managed to weasel my way into Pixar in 2010 so we finally had no more excuses. We looked back on the ideas that we had come up with previously, and this Western stood out. There was much to play around with the iconography of the Western genre, and we grew up watching many Westerns (The Man with No Name Trilogy, “Once Upon a Time in the West,” “Unforgiven,” etc) so it was an exciting prospect for us.

SIGGRAPH: You mentioned in a featurette on the short (below) that you sought to make something more “adult” and “deeper” than what the average consumer might view as traditional animation. Can you talk about what led you to take that specific path with the story?
AC: It honestly stemmed from our desire to do something different than the films we work on in our day jobs. We wanted to grow and learn as storytellers, and the easiest way to do that — for us — was to tackle something that we were not as familiar and comfortable with. As we explored the Western idea and the story we were trying to tell, we tried to find something more personal and tonally darker.

LHL: We also really liked the idea of challenging the audience expectations of both animation, which is mistakenly seen by many in [the U.S.] as a genre specifically for children, and Westerns, which [typically showcase] stoic, hardened cowboys who don’t outwardly display much emotion.

AC: Knowing that Westerns hadn’t been tackled from this specific angle in animation, was exciting for us. And if it was something that excited us, then we were hopeful that it would excite others. That is what kept us going especially when we doubted ourselves… which, unfortunately, happens quite a lot when you work on something for 5 years!

SIGGRAPH: As an official selection of the SIGGRAPH Computer Animation Festival and ultimate “Best in Show” winner, what is your perspective on the importance of the festival circuit and awards in helping gain visibility for an independent project? And, as a follow up, since SIGGRAPH qualifies you for Academy of Motion Picture Arts and Sciences selection, how do you feel large-scale awards, like the Oscars, influence independent filmmaking?
AC: The awards circuit has been a very interesting time for us. We had so much to learn about the politics of it, which festivals are worth applying to since there are thousands, and how to temper our expectations. Getting your film in festivals as an independent filmmaker is an integral part to getting your film seen and building on your reputation with festivals and festival-goers. It is also a great opportunity to meet other great filmmakers and form new friendships that can potentially lead to collaborations or, at the very least, support in common goals. Of course, winning certain festivals definitely can help get visibility for independent projects as well. It’s what you hope for when you make a film, but the reality is that getting it in front of as many people as you can is the real goal. Prizes are icing on the cake.

LHL: We like to think of independent filmmaking as a license to experiment: to really try something that people haven’t seen before, an opportunity to reinvigorate the medium and the industry, and hopefully succeed in finding and connecting with an audience. Often there’s little-to-no funding, no marketing agenda, or ROI to care about, and what you end up with is something that is much more personal, because the stakes are more personal. We very much embraced that opportunity with “Borrowed Time” and what’s unique about these large-scale awards is that they offer a platform and visibility to the larger industry and the general public. The Oscars are the epitome of that for the American film industry, if you’re lucky enough to have your film showcased in that arena, your message as a filmmaker suddenly gets projected into the entertainment sphere at large and hopefully inspires the next round of independent filmmakers to push themselves in the same way.

SIGGRAPH: Which software or tool could you not have lived without during production and why?
LHL: Honestly, with technology that is ever-evolving, we’ll always want to leverage the latest and greatest to get our vision across, but there is no piece of software that is the silver bullet to finding your story. The most important tool to me is draftsmanship, as lame as that sounds! If you can’t communicate your ideas visually with other people, there’s very little hope… still, if we had to pick something that was used in almost every aspect of production it would likely be [Adobe] Photoshop, for that very reason.

AC: I would have to agree. It’s probably not the answer you were looking for, but we have worked in many different programs through our careers, and they all have aspects that are great in their own way. Photoshop was with us from the very beginning of brainstorming and storyboarding, all the way through painting art for the marketing of the finished film, so in a sense we could not have lived without it.

LHL: The reality for us right now, though, is that our focus has been on getting “Borrowed Time” through the festival circuit. It has been a lot more work than we could have ever anticipated, and there’s still a great deal to learn about.

AC: In our careers, we have gotten used to doing our work and finishing on a film and just moving on to the next one, while a separate machine of PR takes the film and gets it out to the public. For our own film, we have to suddenly be that machine (with the bulk of the work done by our amazing producer, Amanda Jones). We are definitely out of our comfort zone to say the least!

LHL: Needless to say, we can’t wait until we can delve in and focus on developing some of these ideas and being creative again!

SIGGRAPH: As students, what experience or which college/university course do you most attribute to helping you excel in your chosen career path and in landing your first job?
LHL: We were lucky enough to be enrolled not only in an animation program, but one that was nested inside a much larger film major at NYU’s Tisch School of the Arts. Our coursework wasn’t just geared toward the craft of animation, or aiming to place us in jobs as animators — it was to develop our understanding of the language of film, an appreciation for shooting and editing 16mm, and a respect for screenwriting and improv. These are things that we relied upon every day while making a film like “Borrowed Time,” and make us more valuable employees at work to boot.

AC: Any writing, story, and language of film classes really helped shape us as directors and storytellers, but the reality is that we didn’t appreciate that part of our education until more recently when we directed “Borrowed Time.” To land my first job as an animator, though, the foundation for my skill is all about observation and having an opinion about what I see in the world. The best class to help me hone in on that invaluable skill was figure drawing class. That thirst for observation then extended out into carrying a sketchbook around and drawing the people around me as much as I could. But even more than that is understanding how people interact with each other and what it says about them as person, or character. All these nuggets of life are what you infuse your character performance with in your job as an animator.

SIGGRAPH: What is the best piece of advice you would like to offer aspiring animators?
AC: Never be afraid of failure. Failing is an important part of learning and growing. If you are not failing, then you are not putting yourself out there and giving it your all.

LHL: And to finish your films! Some of the most important lessons learned are when you’re at the darkest, lowest moments and want to give up: Show people your film and get different perspectives. Learn what you can and keep pushing toward the finish line.