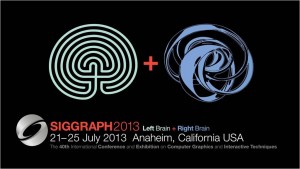 Studio sessions at SIGGRAPH 2013 at the Anaheim Convention Center in California, offer a collaborative working environment and  give attendees a chance to come together to learn, experiment, and create.  Attendees can try out a wide range of new techniques and media in 3D printing, modeling, mobile devices, and animation software and get help from experienced hands.

“Studio is a stand-out program at SIGGRAPH year after year,” said Patricia Clark, SIGGRAPH 2013 Studio Chair from Arizona State University. “It’s an adult technology playground.  It’s more than just seeing the new technology and what it can produce, but attendees also have the chance to collaborate and work side-by-side with experienced professionals that they may not have ever had the chance to meet before.”

Below are a few highlights of each facet of SIGGRAPH 2013’s robust Studio sessions.

Studio Talks
Attendees get a behind-the-scenes look at Studio-related technologies, artwork, and concepts and have the chance to discuss the technologies with the presenters. Attendees can choose from a sampling of the offerings below or view the full list of Studio Talks here.

This talk discusses how a team of faculty and students used digital game technology, motion capture, and facial animation to create a fully realized digital east jump actor (the man-eating plant Audrey II from the musical “Little Shop of Horrors”) that performed on-stage with live actors in November 2012.

This presentation provides an overview of new directions in 3D printing and digital fabrication. It includes short video clips of a variety of different systems.

PUSH Physical Theatre, a Rochester-based group, added iPads to their traditional tools of magic, mime, and movement in the performance of Red Ball. They added five iPads to the mix, performing with graphics created by Marla Schweppe.

Studio Workshops
Attendees engage a series of in-depth, intimate workshops, taught by the best in the industry. Attendee highlights include the following, or see the full list of Studio Workshops here.

Using high-resolution video capture and software from FaceGen, Autodesk MotionBuilder, and other vendors, Ketrina Yim works with attendees to create 3D characters from their own faces and animate them in real time with live expressions by building a facial rig inside MotionBuilder.

A hands-on demonstration of the various 3D data capture devices in Studio 3D.

Experience air painting with the Leap Motion Controller and Corel Painter Freestyle, an exciting new digital-painting paradigm in which you control your brush strokes through finger movements in the air, plus the latest in photo painting with Corel Painter and painting on the iPad.

In this workshop for producing cubic bounce house for sale kaleidoscopes, attendees draw pictures on a computer and use a cutting plotter to cut them into polycarbonate mirrors. Then they incorporate colorful light into the interior of the cubic kaleidoscope, using color-seal film and permanent-marker pens.

Social robot therapy is known to benefit individuals with autism, traumatic brain injury, dementia, and other social and emotional disabilities. The Romibo mobile robot brincolin allows attendees to enjoy participating in the evolution and development of this technology by contributing personal experiences and expertise through clever hacks.

An interactive system to assist design of original weaving patterns and their construction. Users can design the color of each warp yarn, the direction of four yarns passing through each card, and the direction and number of rotations of the cards.