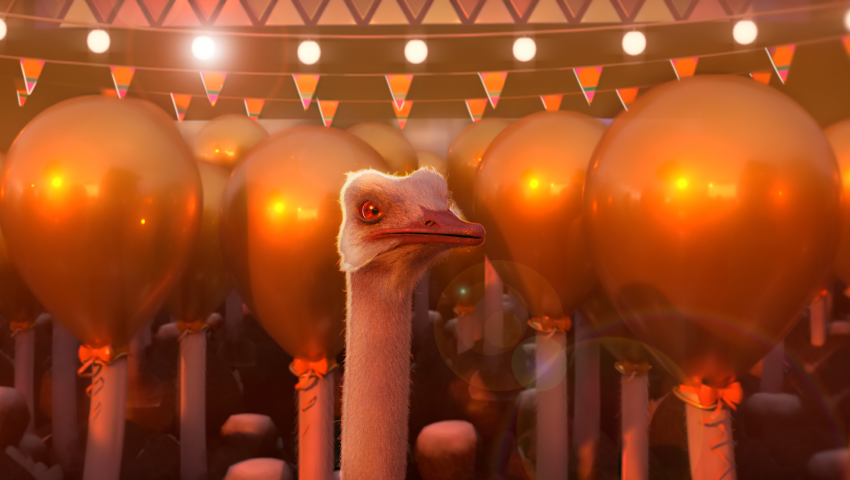 Still from “The Ostrich Politic” © 2018 GOBELINS

In SIGGRAPH 2019 Computer Animation Festival Electronic Theater selection “The Ostrich Politic,” Ostriches learn that burying their heads, once believed to be an instinctive behavior, is no longer a necessary behavior for the species to engage in, thanks to a research advancement from phylogeneticist Dr. Kays. The film aims to point out similar, proven-false beliefs for humans in the hope of provoking audiences to reconsider what they know. Read on for an exclusive interview with the creator, Mohammad Houhou, who developed the film while a student in at GOBELINS in France.

SIGGRAPH: Talk a bit about the process for creating “The Ostrich Politic.” What inspired the idea for the film?

Mohammad Houhou (MH): Well, we [as humans] have a tendency to privilege typical misconceptions over facts. We acquire lots of information without questioning the source; we simply accept it. An obvious example would be the common misconception of ostriches burying their heads when in fear. We went on to create all kinds of films, ads, and phrases, such as “The Ostrich Policy,” all from a false observation. Why didn’t we question it at first? And, even more carelessly, why do we spread it?

SIGGRAPH: How big was your team? What kind of challenges did this create and how did you handle them? Did you face any extra roadblocks being students? Did you work with any mentors?

MH: Unfortunately I wasn’t working with a team, I started off as the only member; however, I received several helping hands during the production of the film. Some artists helped me with visual development, others helped with 3D modelling, animation, rigging, shading, or lighting. This was very difficult to manage since it was mostly done from a distance, and based on my friends’ free time, so scheduling things was tricky. A funny story is one animator, Pratik Purkayastha, moved in with me for one month during the animation phase so it would be easier for us to work. We lived in an 18m2 flat in Paris, shared a narrow desk in half, ate some delicious biryani all month long, and worked on the film.

I never thought that many types of [we experienced] roadblocks [could] exist. I still face roadblocks [today], after the completion of the film. Regardless, I accepted all the challenges and believe it has shaped me very well.

I worked with some AWESOME mentors. One thing that really pushed the film forward was that I was getting feedback from professionals on topics not only tied to their specialty. For example, Head of International Students at Gobelins Cecile Blondel gave me a lot of feedback on the poetry. I started pre-production really late, the screenwriting professors had already left the school by the time I began writing. So when the storyboarding teachers came in, they first gave me advice on the script. When they left and the visual development mentors arrived, they would give advice on the animatic, since I barely had any designs ready. Animation professors gave me feedback on the character design, 3D modeling, etc., before we got to animation. I even had an animation professors providing feedback on the poetry, too. Although this isn’t the usual workflow for working on a film, I felt there was something special about this approach. In addition, we were very fortunate to have Guillermo del Toro as the patron of the 2018 class at GOBELINS Master of Arts in Animation.

SIGGRAPH: Let’s get technical. What was it like to develop the film in terms of research and execution?

MH: The film took around 10 months to be completed and I had to work through the summer vacation. In particular, the ostrich was a really interesting character to build, it’s like God made a collage out of 10 other animals. A tall fury neck, reptile feet, round feathery body, flightless wings, massive eyes, and a pink beak — what a piece!

One challenge I faced was that I wanted to push the character toward a realistic style, in order to enhance the absurdity of having an ostrich living in a human environment. Fur and feathers are considered as some of the most complicated pieces to create in 3D, and I was told endlessly that GOBELINS does not have the capacity for such a 3D project so I would not be able to create a piece that involved such a level of CG rendering. Nonetheless, I pushed through and was able to deliver the film. I apologize if [that] sounds too rebellious … but that’s how things were.

Moreover, I researched a lot about how ostrich wings function, their volume and their dynamics. Another technical challenge was creating the crowds in the film, I had several shots with hundreds of ostriches protesting or celebrating.

[In terms of software,] Maya was the main tool that I used (thank you Autodesk!). However, I only had access to Xgen for the fur and feathers, and that wasn’t efficient since Xgen bugs a lot. They were not bugs or errors that I could figure out with a simple Google search, they were the type of bugs that produced existential thoughts and I began to question my purpose in life. I also used After Effects for compositing, Mudbox for texturing, and Arnold for rendering. It was my first time using Arnold and my professor, Damien Ancinelle, gave me a great crash course, and I used online tutorials from that point on. I also used an online render farm to speed up the rendering process.

SIGGRAPH: What message do you want audiences to take away after watching your short? Is there a certain feeling you hope to convey?

MH: In general, I wish our beliefs could be based on facts that support them, rather than on misconceptions that comfort us. [People] should question whether information [they] have acquired throughout the years is necessarily true.

I noticed, after attending several festivals, a silence among the audience when the film ends. There is applause, of course, but it wasn’t instantly at the credits. Something was triggered, a slight shock, perhaps, from an unexpected source. I felt people were deep in thought for a moment and it seemed it had been a while since they looked at things from such a perspective.

SIGGRAPH: What’s next for “The Ostrich Politic”?

MH: For the moment, we’re trying to spread the film’s message (thank you, SIGGRAPH, for helping us do that!). We’ve had a great festival run. The film has been selected globally across seven continents, and won Best Animation at LA Shorts Fest, which qualified it for the 2020 Oscars.

In the years to come, I hope the message of the film will no longer be relevant, as it is today, and that the film is only a reminder of past behavior. That would be the “best case” scenario.

SIGGRAPH: What advice do you have for other students or anyone else who might be looking to present their short film at SIGGRAPH?

MH: Focus on story. It’s easy for an artist to fall in love with their concepts and artwork while creating a film. There’s nothing wrong with that, in my opinion, as long as the story was given the same effort and thought.

Have a film you’d like to submit the SIGGRAPH 2020 Computer Animation Festival? Submissions for next year’s Electronic Theater will open later this winter and are due 17 March 2020. Keep an eye on this page for more information.

Watch the full short film and all-new “making of” featurette below.