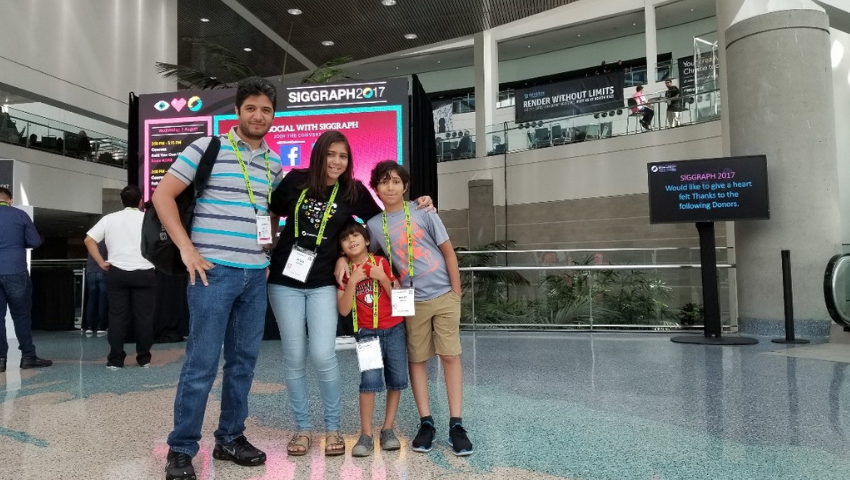 If you are a parent in a computer graphics or immersive technologies profession, what could more exciting than sharing your passion with the next generation? Including your children in the SIGGRAPH experience is a chance for them to not only better understand your “day job,” but also to explore the outstanding work and innovation present throughout the conference and tap into their creativity.

Mohamed Ebeida, a research scientist at Sandia National Laboratories, shares his experience of bringing his children to SIGGRAPH in 2017. SIGGRAPH has inspired growth and creativity in his kids, even leading them to participate in robotics league competitions. Their award-winning First Tech Challenge team, The Marvels, is comprised of nine students who build robots, lead robotics camps, and encourage the study of STEM/STEAM for students across the state of New Mexico. Read on to discover how SIGGRAPH was a life-changing, eye-opening opportunity for Mohamed’s kids.

SIGGRAPH: Tell us about your SIGGRAPH story. What inspired you to start bringing your kids to SIGGRAPH?

Mohamed Ebeida (ME): I’ve been attending SIGGRAPH every year since 2012. My research background is computational geometry (mesh generation and sampling). Attending SIGGRAPH and presenting my work there has significantly impacted my research and inspired me to explore new areas such as rendering, motion planning, and AI.

In 2015, I started to teach my kids — among other kids in our community — the basics of programming. To get them excited about learning how to code, I asked them to program a game that they like, and through their questions, they learned more and more. This mix of learning and having fun worked very successfully with these kids, and I learned that trick from SIGGRAPH.

Attending SIGGRAPH is a great joy and an awesome learning experience at the same time. In one session, you can attend a top notch technical presentation; in the next, you can be in a Production Session watching how your favorite movies were created; and at the end of the day, you can’t wait to see what you will experience the next day. I encourage all students that I work with to attend SIGGRAPH to get similar inspiration. They all leave SIGGRAPH with a real desire to change the world!

SIGGRAPH: How has SIGGRAPH inspired growth and creativity in your children?

ME: In 2017, I learned that I can take my kids to some of the sessions at SIGGRAPH. I took my daughter, Meera (13 years old), and my two sons, Hamza (10 years old) and Omar (7 years old), to attend the Exhibition. Right away, they were all blown away by the VR and the robotics systems they got to experience first-hand. The images below illustrate their experience during that conference.

Attending the Production Gallery was a very fun experience, especially for the kids.
They got to see Baby Groot and Overwatch!

The most impactful experience took place when Hamza tried Metalimbs and he was able to control a cup full of water without using his hands. That was a blast for him. Immediately after doing this, he came to me and said with all the excitement in the world, “I gotta build one of these. This is super awesome!”

This was the moment we decided to move our robotics team from the First Lego League (FLL), where they program a small robot made of Legos, to the First Tech Challenge (FTC), where the robot is made of industrial materials similar to the artificial limbs that inspired Hamza at SIGGRAPH.

SIGGRAPH: Share a bit about the robotics team your kids have formed since attending SIGGRAPH.

ME: Before SIGGRAPH, the kids were part of an FLL team called Sabretooth Cyborgs. In this competition, they learned the basics of programming and designed a small robot made of Legos that could achieve some simple tasks. In their first FLL year, they made it all the way from New Mexico qualifiers to an international competition organized by NASA. Their success story was acknowledged through multiple new articles and by top New Mexico politicians.

Our FLL team after winning the core-value award at the Mountain State FLL competition organized by NASA.

The Sabretooth Cyborgs’ success was recognized by New Mexico politicians.

After the SIGGRAPH experience, the kids were all about building real robots using industrial material. Hence, we made the decision to form a new team called “the Marvels.” We started preparing to compete in the FTC competition. In 2018, we competed in FTC for the first time, and participated in three qualifiers, making it to the semi-final once, the finals twice, and winning a total of five trophies. In New Mexico, it was unprecedented to have such a strong first year in this tough competition against other teams that have great experience and are well sponsored by big companies.

Our FTC team during the White Mountain Qualifier (top) and robot assembly (bottom).

Now that the kids were using industrial material in building their robot, they had to learn a lot of engineering concepts from CAD design to structural strength going though dynamics. The amount of effort they put into this was incredible. The SIGGRAPH experience gave them great motivation to embark on this tough path.

Outreach activities have been a core part of our robotics efforts.

Inspired by the generous idea sharing the kids witnessed at SIGGRAPH, they realized that they should give back to their community. So, they established a YouTube channel where they present their new ideas. They present their robot at different public events in New Mexico, like Explora’s Science Fiesta. Also, they hold training sessions in public schools so other kids can share their experience.

SIGGRAPH: What has been the best part of bringing your children with you to SIGGRAPH?

ME: Opening their eyes to the world of SIGGRAPH, where a group of people work hard together to improve the lives of humans in every way they can think of. That really set their minds on the right track.

SIGGRAPH: Are your kids planning to attend SIGGRAPH 2019? What are they most looking forward to?

ME: Yes, they can’t wait. They keep asking me about when we are going to leave for L.A. I think they are most looking forward to the recent progress in VR techniques. They also want to attend the Marvel sessions, especially the making of “Avengers: Endgame.”

SIGGRAPH: What advice would you give to parents who are considering bringing their kids to a SIGGRAPH conference?

ME: This is an experience that will change their lives. Go for it, and never hesitate!

Invite your children to experience the magic of SIGGRAPH 2019. Register them for the conference, 28 July–1 August, in Los Angeles, and give them the chance to play and experiment with the latest industry innovations in venues like the SIGGRAPH 2019 Studio. We hope to see you and your offspring there!

Mohamed Ebeida is a research scientist at Sandia National Laboratories. His main areas of expertise are computational geometry and uncertainty quantification. He graduated from University of California, Davis in 2008 with a Ph.D. in mechanical and aeronautical engineering and a master’s in applied mathematics. He worked for two years as a postdoc at Carnegie Mellon University. In 2010, he joined Sandia National Laboratories, where he works in exploring the potential of Voronoi decompositions for a wide range of non-traditional applications. Mohamed is the founder and the program lead of the IbnSina Mindcrafters robotics school that was established at the Islamic Center of New Mexico (ICNM) in 2016, serving more than 120 students so far. Many teams formed out of this program participate in the First Lego League (FLL) competition. In their first year, the top teams — Sabretooth Cyborgs and Pandamoniums — made it all the way from New Mexico qualifiers to the international stage at the Mountain State competition, winning the core-value award. Last year, these two teams joined forces to form an FTC team coached by Mohamed, and in their first FTC season, the Marvels won five trophies over three qualifiers in New Mexico and Arizona. Mohamed is actively engaging public schools and New Mexico politicians in supporting the robotics activities of FIRST in New Mexico.