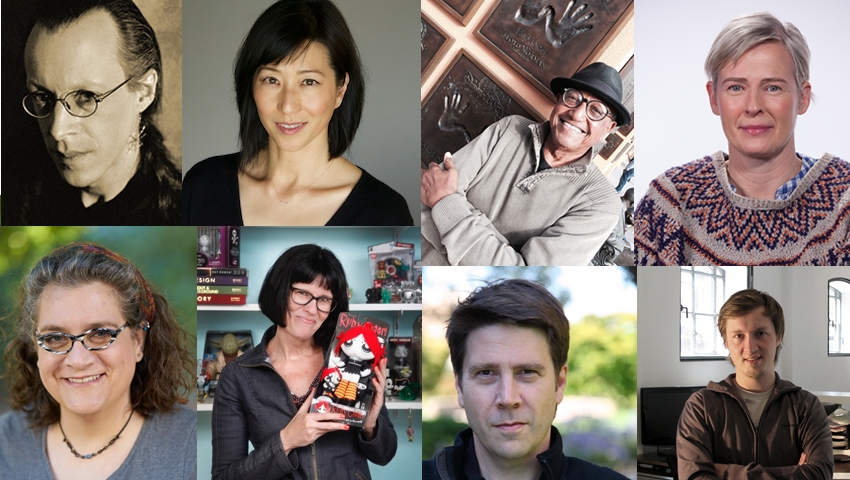 The submission deadline for the 2017 SIGGRAPH Computer Animation Festival is 21 March and if you’re thinking about entering your work, here are eight inspiring reasons to do it. This year’s Electronic Theater jury is filled with some of the industry’s finest minds and creative talent. The jury is in!

GEORGINA HAYNS
“Kubo and the Two Strings” marks Georgina Hayns’s fourth film at LAIKA. She also supervised puppet fabrication on “The Boxtrolls,” “ParaNorman” and “Coraline.” She has been involved in all aspects of puppet fabrication for stop-motion films for over twenty years. Her career began in the UK, working for Cosgrove Hall Films, Mackinnon and Saunders and Warner Bros. In 1993, Georgina joined Mackinnon and Saunders as an armaturist where she supervised children’s television series and commercials, including BBC Television’s “Noddy,” HIT Entertainment’s “Bob the Builder,” Lipton Brisk Tea and Puffs Tissues. She also worked on animated feature films including “Mars Attacks!” and shorts including the Oscar-nominated “Periwig Maker.” Prior to joining LAIKA in 2006, Georgina worked on “Corpse Bride.”

POLLY ING
Polly Ing is an accomplished computer graphics artist and leader. She has 20 years of experience in the visual effects industry. Polly recently joined Apple, Inc. as a Senior Engineering Program Manager.

Before Apple, Polly was a Computer Graphics Supervisor at Industrial Light and Magic, the visual effects division of Lucasfilm, Ltd. She helped reboot the “Star Wars” franchise in her role as Global Computer Graphics Supervisor for “Star Wars: The Force Awakens.” Her filmography includes movies such as the Academy Award winning “Pirates of the Caribbean: Dead Man’s Chest” and “Star Trek Into Darkness.” During her tenure at ILM she was also a Computer Graphics Supervisor on “Rango,” the first animated feature produced by ILM. It won an Academy Award for Best Animated Feature. She has been nominated for three and won two Visual Effects Society awards for her work in film. Polly also lent her expertise and leadership to a real-time collaboration between ILM and LucasArts. “Star Wars 1313” was a real-time game cineractive built on top of the Unreal Engine that debuted at E3 and won several accolades.

KIM LIBRERI
Epic Games CTO Kim Libreri is responsible for continuing Epic’s tradition of fusing state-of-the-art technology with the pinnacle of visual artistry, and for defining the studio’s Unreal Engine as the platform of choice for all types of interactive experiences including games, movies, visualization and virtual reality.

Prior to joining Epic Games, Kim was the Chief Strategy Officer at Lucasfilm, where he was responsible for the company’s Star Wars technology strategy and innovations in interactive storytelling, including the highly-awarded 1313 prototype.

Kim’s career in digital technology and visual effects spans over 20 years, and he has credits on more than 25 films including “Super 8,” “Speed Racer,” “Poseidon” and “The Matrix Trilogy.”

He led the development team for the award-winning “What Dreams May Come” as well as for the original “Matrix,” developing the now-legendary Bullet Time technology.

Kim is a respected member of many visual effects bodies, including the visual effects branch of the Academy. He has received numerous awards for his work and contributions to Motion Picture technology including an Oscar nomination in 2006 and two Academy Awards, in 2000 and 2015.

Floyd has written the Mickey Mouse strip and worked as an animator and story artist on at least a dozen feature animated films for both The Walt Disney Studio and Pixar Animation Studios.

Though retired, Floyd continues to work as a consultant for the Walt Disney Company and is currently creating a new book about the Disney legacy. He has also developed video games and toys for Disney Consumer Products .

On occasion, Floyd works outside the Disney Company on other animated projects such as Curious George, Free Birds, The Annoying Orange and Robot Chicken.

TILL NOWAK
Till Nowak is a digital artist, designer and filmmaker from Germany, now based in Los Angeles. His short films have been awarded with more than 70 awards, including in Annecy, at the AFI Fest Hollywood, at Aspen Shortsfest or at Anima Mundi, and his work has been exhibited in hundreds of international film festivals and exhibitions, featured in many art books and at SIGGRAPH 2006, 2007, 2009 and 2011. Till has conducted several permanent art installations on historic buildings, such as the Rendsburg high bridge in Germany or the historic water tower in Neumünster, Germany. He has given lectures about his unconventional CG workflows at international events, such as FMX conference, Tampere Film Festival, universities in Korea, Germany and Australia, at the 361° conference in Mumbai and at the NIFFF in Neuchatel. Till is a member of ASIFA Hollywood, the Art Directors Guild, the German Film Academy as well as the European Film Academy and has worked as a jury member in a number of film festivals. He currently works as a concept artist at Marvel Studios.

Prior to Lytro, Cristin was a stereo supervisor at Industrial Light and Magic, where she also worked as a technical lead for desgning and implementing ILM’s canonical Nuke system. Cristin’s career in visual effects spans many roles over 20 years and many films, including “300,” “Rango,” “Titanic,” and “The Matrix Reloaded,” and “The Matrix Revolutions.”

She studied animation under Derek Lamb, Suzan Pitt, Jules Engel, and Christine Panushka, as an undergraduate at Harvard and graduate at CalArts.

RICK SAYRE
Rick Sayre has been at Pixar Animation Studios for three decades. His feature credits include a long list of Pixar films from “Toy Story” onwards. He has also been involved extensively in theater, live action visual effects and interactive art. Recently, he contributed to standards and workflows for high dynamic range feature film production and exhibition. He is a member of the Academy of Motion Picture Arts And Sciences, the British Academy of Film and Television Arts, the Visual Effects Society and SMPTE. He is currently supervising an upcoming animated feature.

RITA STREET
Rita Street is an executive producer and indie development artist under the Radar Cartoons, LLC. umbrella. She is excited to be opening a second development company called Panita Productions with EP Lina Silva of Kreiworks, dedicated to sourcing, developing and selling Latin American content. Rita’s recent executive producer credits include: “Hero: 108” which ran for two seasons on Cartoon Network; “Teenage Fairytale Dropouts” which aired on The Hub and “Ruby Gloom” which now airs on Netflix. Currently, Rita is working on the development of a Latin American network project and a series that she co-created has just been greenlit by a major global network. Rita is also the EP of a CG feature film project called “100% Wolf” for producer Flying Bark in Australia. She is the author of the popular e-book: “A Cartoon Girl’s Secret Guide To Developing Kids’ Comedies That Sell” and is proud to have served as the former publisher of Animation Magazine for many years.

Previously, Rita worked as a publisher, editor and journalist focusing on the industry of animation. She has served as the publisher of Animation Magazine, the editor of Film & Video Magazine and has also authored several books on graphic arts including the Rockport Publisher hardback, “Computer Animation: A Whole New World.” Rita is the founder of the international non-profit organization, Women In Animation.