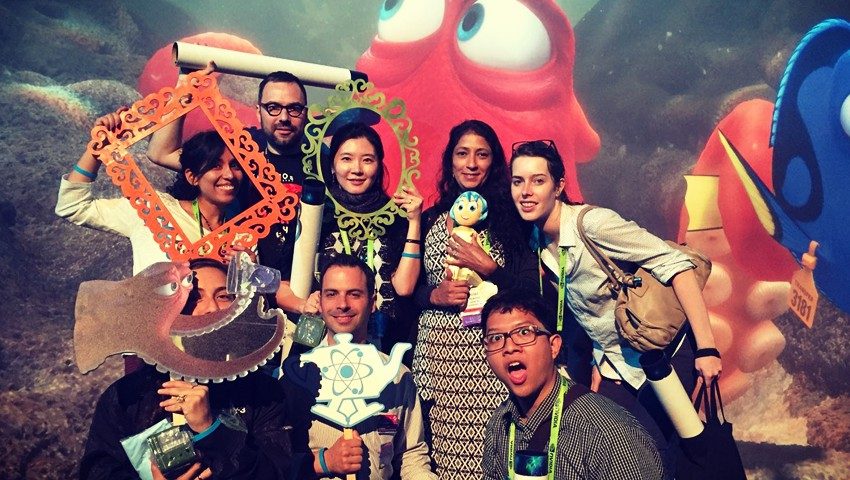 Photo: part of the IRC committee at the Pixar Party at SIGGRAPH 2016 in Anaheim, CA

In just a few days, the spectacular luxury hotel and casino resort Venetian Macao will open its doors to thousands of attendees who will be taking part of the 9th ACM SIGGRAPH Conference and Exhibition on Computer Graphics and Interactive Techniques in Asia, SIGGRAPH Asia 2016.

One particular group that is making history at SIGGRAPH Asia 2016 (SA 2016) is the ACM SIGGRAPH International Resources Committee (IRC), who, for the first time, will bring over all the activities already established within the SIGGRAPH conference in North America.

Hong Kong, city of lights and immensely high skyscrapers. One of the largest commercial ports in the world, full of containers, cranes and machines moving boxes. At least that is how it felt when I contemplated it from the bus taking me from the airport to the hotel. Driving through the streets of the city in the middle of a traffic jam, I could not help but thinking: So different but so familiar at the same time. Would I feel the same about SIGGRAPH Asia?

And indeed! SIGGRAPH Asia 2013 was my first experience with the Asian edition of a conference that has been dear to my heart since 2003. The presentations, the screenings, the people, the after-conference-parties, our IRC booth, all that is ingrained in my memory with a sweet flavor of “this is life.” I have not been the only one with this feeling, however. IRC team members have been repeating this experience year after year at SIGGRAPH Asia, with our IRC booth a proud sign of our presence in Asia.

Now, 3 years later, we are coming with the full pack: booth, IRC sessions, audio guides, presentations for the Student Volunteers, and a special participation in the ACM SIGGRAPH Chapters Workshop.

IRC Booth at the SIGGRAPH Village

With a wonderful design created by our IRC member Krissa Ng, which highlights the internationality of the committee and the people that are part of it, the IRC booth will stand next to the ACM SIGGRAPH, SIGGRAPH 2017 and SIGGRAPH Asia 2017 booths within the SIGGRAPH Village, located just outside the Exhibition floor.

Over the four days of the conference, members of the IRC will be there ready to answer questions about our committee and our volunteer opportunities. Check us out at booth number L3-01!

Our “podcasts” are now called “audio guides” and have been one of the IRC trademarks of the North American SIGGRAPH conference for the past three years. These audio guides are recorded translations of the work descriptions, or artist statements that are part of Emerging Technologies, Art Gallery and, most recently, VR Village. The motivation behind them was to build a linguistic bridge between the author and non-English speaker attendees. At SIGGRAPH Asia, we will provide audio guides for Emerging Technologies, VR Showcase, and Art Gallery in Chinese (Mandarin and Cantonese), Japanese, Korean, and Bahasa, which represent the current Asian regions covered at the IRC. Audio guides in English are also provided.

The process for creating the audio guides begins with a written translation, by our volunteers, of the material provided by the different committees, followed by voice recordings. For SA 2016, a total of 11 volunteers, native speakers of one of the mentioned languages, devoted themselves for over a month to translate and record the audio for each of the works. Finally, a post-processing step is performed, which leads to the final upload of all audio guides to the SIGGRAPH.org website.

This year the IRC has also provided QR codes with shortened URLs that take the attendees to the audio guides in a more straightforward way. These QR codes can be seen on the signs for each of the works at the Exhibition Hall (Emerging Technologies and VR Showcase) and Library Building (Art Gallery).

Check out all the audio guides at:

Thanks to the support of SA 2016 Conference Management, we organized regional sessions in a similar way to the North American conference. The main difference is that instead of focusing on regions of the world, we chose topics that will be interesting for the Chinese and non-Chinese attendees of SA 2016.

“Understanding Asia: Focus China” (了解亞洲：聚焦中國) (了解亚太:中国) brings the audience a very honest view of what it is like to live in China and Hong Kong from the experiences of those born there, and those who have adopted these countries as their new home. The session will count with the participation of Börje Karlsson (Microsoft Research Asia, China), Daniel Drochtert (University of Applied Sciences Düsseldorf, Germany and SA 2016 SV Committee Chair), Eugene Harng (Just Cause Entertainment, USA), Kening Zhu (School of Creative Media, City University of Hong Kong, Hong Kong) and Rebecca Ko (Rooftop Animation, Hong Kong).

“Studying Abroad” (海外留學) (留学在海外) is oriented to all attendees who have the desire to study in other places away from their homeland. Following the format of “Understanding Asia”, a group of young panelists, consisting of Mhd Yamen Saraiji (Keio University, Japan), Arthur Zozimo (Hanyang University, South Korea), Xiyue Wang (Columbus College of Art & Design, USA) and Hwei Geok Ng (University of Hamburg, Germany), will share with the audience what it is like to study away from their home countries.

“Working Abroad” (海外工作) (工作在海外) is an ideal opportunity to know who are the big players in the CG industry outside China, and what it means to work abroad. Everybody who would like to know how Cecilia Chai (HRBP for America & Australia Branch at DJI, Shenzhen, China), Shuzo Shiota (CEO, Polygon Pictures, Japan  / SA 2016 CAF Co-Chair), Sophie Xu (Line Producer, Original Force Ltd, Nanjing, China) and Jos Stam (Head of Graphics & Simulation, Autodesk Research, Toronto, Canada) are bringing their companies, and themselves, to the next level is invited to join the session.

“Women in CG – Asia” (亞洲CG界中的女性) (女性在CG-亚洲) makes its opening appearance in Asia with a delightful panel of women who will share their views of what it is like to be a professional woman in the field of CG and Animation in Asia. The conversation between Dallim Park (Assistant Director at the Seoul Metropolitan Government, Culture Convergence Economy Division, South Korea), Rianti Hidayat (Concept artist at COLOPL Inc, Japan / SA 2016 SA SVSC), Miao Song (Executive Director at Canada China International Film Festival / Concordia University, Canada) and Mei-Fen Chen (Professor, Robert Morris University – SA 2016 Symposium on Education Committee Member) will touch many of the points discussed in the previous editions of “Women in CG”, but focused on Asia.

“Girls in STEM” (STEM中的女生) (STEM女孩) is the result of a close collaboration between the International Resources Committee and the Symposium on Education, where the conversation will revolve around the position of women in STEM and the academia. The highlight of the session is the participation of Tomasz Berdnaz (Associate Professor Queensland University of Technology, Australia) and Evan Binkley (EA Teacher, Cheung Chau Sacred Heart School, Hong Kong) who will share their perspectives about this topic with the fellow panelists Mashhuda Glencross (Director for R&D at SwitchThat Technologies, United Kingdom / ACM SIGGRAPH General Submissions Chair 2017), Juan Cao (Associate Professor, School of Mathematical Sciences, Xiamen University) and Miu Ling Lam (Assistant Professor, City University of Hong Kong).

For more information about the sessions schedules, check the great conference program at glance that SA 2016 has prepared for you.

Looking back to the last day of SIGGRAPH 2016 in Anaheim, I would have never dreamed that the IRC could produce 48 audio guides (for Emerging Technologies, VR Showcase and Art Gallery) in 5 languages (Chinese, Japanese, Korean, Bahasa and English) and 5 IRC sessions (one in collaboration with the Symposium on Education), and that we would engage 8 on-site volunteers within our booth. As we build our presence at SIGGRAPH Asia, I have to acknowledge that it would not have been possible without the passion and hard work of IRC volunteers Miho Aoiki, Muhammad Arief, Kim Baumann Larsen, Tomasz Bednarz, Jacky Bibliowicz, Phil Gough, Juyeon Hong, June Kim, Kent Mok, Krissa Ng, Dolly Omisore, Aruquia Peixoto, Jessica Sommerville, Jing Wang, Suyin Wong and Jiaying Xu.

To each one of them, I can only say “thank you!” And to those reading this, I hope you will enjoy SIGGRAPH Asia 2016 as much as we will.