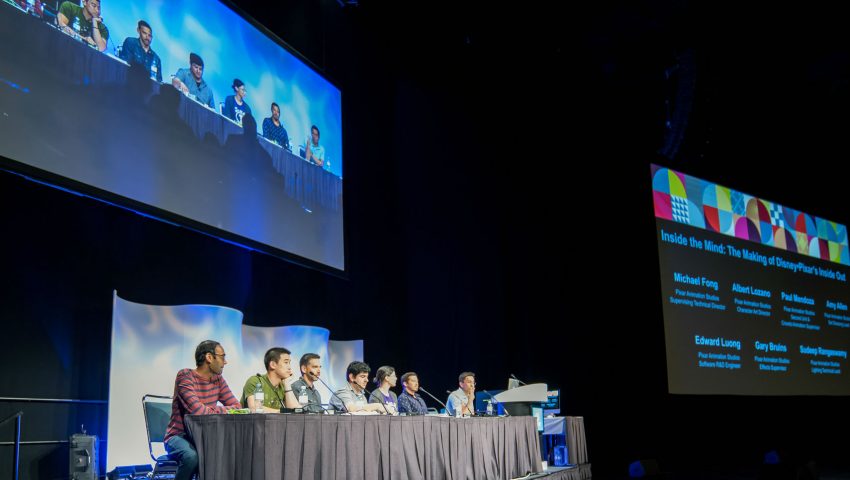 “Inside Out” is the fifteenth feature film from Pixar Animation Studios and the third film by director Pete Docter. On Tuesday, 11 August 2015, a panel of the brilliant team behind the film came together to share with SIGGRAPH 2015 what it was like to make the Golden Globe winning feature. The production session, “Inside the Mind: The Making of Disney•Pixar’s ‘Inside Out’,” broke the process into six small discussions, and what follows are highlights of what was shared.

When envisioning “Inside Out,” Docter drew inspiration from his life with his young daughter. According to Character Art Director Albert Lozano, it took 5-6 months to design the film’s main character, Riley, who ended up looking like Docter’s daughter.

For the other main characters, Riley’s five emotions, Lozano recalls starting with very basic shape language and working to evolve each individually from there. What were those shapes? Lozano shared,

If you have seen “Inside Out,” you know that the film jumps between the real world and the world inside characters’ heads, which is an important distinction: The film takes place in the mind, not the physical brain. There are illusions, references, and inspiration to neuroscience and biology in the set design, shared Set Dressing Lead Amy Allen, but the environment they created is in the mind.

How did her team work to differentiate the real and the mind world? Riley’s real world is stylistically vertical with straight lines and realistic shapes and shading. While San Francisco is confined spatially, the world of Riley’s mind has organic and simple shapes that glow in translucent materials and feature more open spaces. The mind world was more of a visual challenge because, even though the team had images of the brain, there was no real frame of reference for the what the mind should look like.

“’What did it take to make the mind world? What was our secret?’ Well, if I’m being completely honest, because we’re all family here at SIGGRAPH, it took… sadness,” shared Allen. “Just like Riley needed sadness, we needed sadness, too. Anger, it took some anger to make the mind world, a little disgust, and a touch of fear. And, last but not least, more anger. It also took joy. The Sets department did feel all of the emotions working on this show as it was quite challenging.”

At Pixar, sequences go into production while the story team is still working and, as at most studios, production order of sequences does not match the film order. In the end, that helps the stories be even better but it does have its hardships on the technical departments. The difficulty of creating “Inside Out” can be summed up by a quote from Production Designer Ralph Eggleston, “Our biggest goal and challenge as filmmakers was to design a world that has never been seen before. A world that is interesting, magical, appealing, and yet also supports the story in a completely inevitable way.”

The final version of the mind world supports the story in an inevitable way because, to the audience, it leaves no room for distractions or questions that world should be anything other than what it is and, therefore, the world feels true and correct.

Once the team narrowed down which emotions were going to be part of the story, the animation department, including Second Unit and Crowd Animation Supervisor Paul Mendoza, had a daunting task ahead of them: To try to personify emotions. As they explored the central character of Joy, specifically her physicality and body language, they worked with actress Amy Poehler (the voice of Joy) to try and nail down the right balance of optimism, manic energy, and devilish manipulation.

One of the biggest challenges in animating “Inside Out” was eye direction. The team knew they would have to do something different with Joy’s eyes, for example, as she had a very tall eye design. Scanner controls made the top lids feel like they were shrinking, and the team didn’t want to separate the lids from the geometry so that they could keep the lids and sockets feeling fleshy and connected. For the final animation, the team looked at a lot of classic characters with tall eyes and how they played emotions, and then used pupil shifts to offset the irises in Joy’s eyes, which allowed for better focus.

Gary Bruins, Effects Supervisor, revealed during his talk that many of the effects for the film were created in Side Effects Software’s Houdini, and that some of the most difficult sequences for his team centered on the cliff edges of the mind islands.

In an early version of the story reels, it was clear that the cliff edges were meant to crumble toward characters as they try to outrun it. Docter wanted the tendrils making up the cliff edges of long-term memory to be somewhat soft and pliable, similar to ice plant leaves. As an island went down and consequently pulled on the cliffside, Docter wanted the tendrils to stick to one another until enough pulling force was exerted to separate them from their neighbors. This required that neighboring tendrils share identical vertex locations. Ideally, the Effects team could simulate Sets’ existing cliff tendrils; however, Sets’ cliff edges were composed of hand-modeled tendrils that had varying vertex count and locations. As a result, the Effects department rather than the Sets department procedurally created FEM friendly cliff-edge tendrils for all destruction shots, which led to a combination of key frame tendrils from the Second Unit and simulated tendrils from Effects.

Software plays a big role in every animated production, which is where Edward Luong, software R&D engineer, and a team of about 100 others come in. The Engineering team (or “Tools”) at Pixar is run a bit like a software company. At any given moment, Pixar has a bunch of films in progress and each one has its own technical teams. Tools is there to support all projects as well as maintain the software.

Luong summed up his team’s process and philosophy in one sentence, “Context helps tell our artists what they are doing and what they need to do next; if we can’t fix performance, then the goal with context is to help artists work smarter.”

What do Pixar Lighting artists do? Just like in live-action, they support the story. But they also set the mood, guide the viewer’s eye, and establish the time of day and weather. In “Inside Out,” harsh lighting indicated that it was a dark environment in scenes like Riley’s first night in San Francisco. Sudeep Rangaswamy, lighting technical lead, spoke in detail about the difference between master lighting (developed after Layout has created shots and sets have been built) and shot lighting (developed after animation is finished), and the technical challenges his team faced.

One of the biggest obstacles for lighting came from the fact that the emotion characters were light sources themselves, and, as a result, needed to cast light in a believable way. Further, they needed to also respond to light from the environment. To solve this, his team worked closely with the RenderMan team to use a geometric tag lighting technique. They also developed a technique Rangaswamy referred to as “glow darkening” to overcome the challenge of lighting light sources (i.e., lighting a light bulb) in order to make the characters feel real.