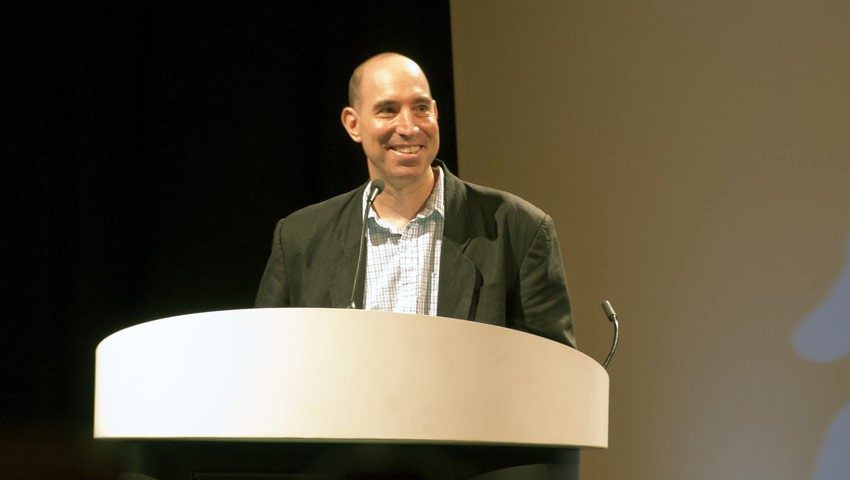 Recently I had a delightful conversation with Adam Finkelstein, a newly awarded ACM Fellow. Fellowship is a prestigious honor bestowed upon ACM members who have made significant contributions to computing, and is awarded to a mere one percent of the association’s membership. Adam is part of the 2014 ACM Fellows Class, who hail from some of the world’s leading universities, corporations and research labs. Together they have achieved advances in computing research and development that continue to drive innovation and help sustain economic development around the world. ACM will formally recognize Adam and the other 46 ACM Fellows at its annual Award Banquet this June in San Francisco.

Adam is a Professor and Associate Chair of Computer Science at Princeton University.  He is also a highly active ACM SIGGRAPH volunteer, and is well respected in the community for his contributions to non-photorealistic rendering, multi-resolution representations and computer graphics. When talking to Adam about his award, he expressed deep appreciation for the efforts of those who nominated him. “I feel grateful for receiving this award,” he said, “and thankful for the initiative and hard work of my peers who advocated on my behalf in order to make this happen.”

Adam has been volunteering for ACM SIGGRAPH since 1994, because — as he says — it’s important to be part of an arts and science community where the “strength of the organization is that many communities come together.” Adam started volunteering as part of the Papers Jury, and served as Papers Chair for SIGGRAPH 2014 in Vancouver, Canada. His first Conference committee position came in 2007, as the Sketches and Posters co-chair with Marc Alexa, and then again at S2008 as Conference Research Director. According to Adam, as he began to volunteer he was surprised to discover the massive effort required by the huge team of volunteers and contractors to run ACM SIGGRAPH and the hugely popular annual SIGGRAPH conference.

Adam started his graphics career working on multiresolution methods for computer graphics, and quickly became interested in the use of graphics in the traditional form of animation known as cel animation. His PhD advisor at the University of Washington, David Salesin, pioneered the field called non-photorealistic rendering (NPR) and Adam soon began work in NPR in a collaboration with Lee Markosian and others from Brown University, where they created WYSIWYG NPR — an effort to make computer graphics (CG) accessible to everyone, especially artists.

Adam explained that artists working in traditional media have ways to convey the complexity of a scene to the viewer through the use of abstraction, but accomplishing the same thing with computer graphics is incredibly difficult. Tools like WYSIWYG NPR allow designers to apply similar principles of abstraction to 3D models, while providing a personal aesthetic to a computer-rendered scene.

Adam’s interest in line drawing came early in 2000, when he teamed with Doug DeCarlo, Szymon Rusinkiewucz and Anthony Santella, who were tackling the question of what lines were missing in computer-generated line drawings of 3D shapes? They came up with the concept of “suggestive contours,” a new line definition that extend the contours on smooth shapes to form a more complete drawing.

In subsequent work, Adam teamed with Forrester Cole, his PhD student, and others to publish a pair of papers at SIGGRAPH 2008 and 2009 called “Where Do People Draw Lines?” and “How Well Do Line Drawings Depict Shape?” In these papers, they analyzed what lines artists draw when they create 3D shapes — and what shapes people see when they look at line drawings. The researchers explored how well computer algorithms might be able to explain how artists draw. They found that an artist’s line drawings, in controlled situations, are consistent with other artists’ drawings, and most of the lines drawn could be described by mathematical properties of the shapes they draw.

At Princeton, Adam is very involved in the Art of Science, which began as a yearly competition in 2005.  The competition explores the connection between art and science, and consists of images and video created in the pursuit of science. Like much of Adam’s work, it is an endeavor to make science and engineering accessible to non-experts.  According to Adam, he and the other organizers would very much like to scale this competition up to include other institutions.

We at ACM SIGGRAPH would like to congratulate Adam for his award, and his work that helps bridge the communities of arts and science.  His understanding of visual communications strengthens the work we do as a community.