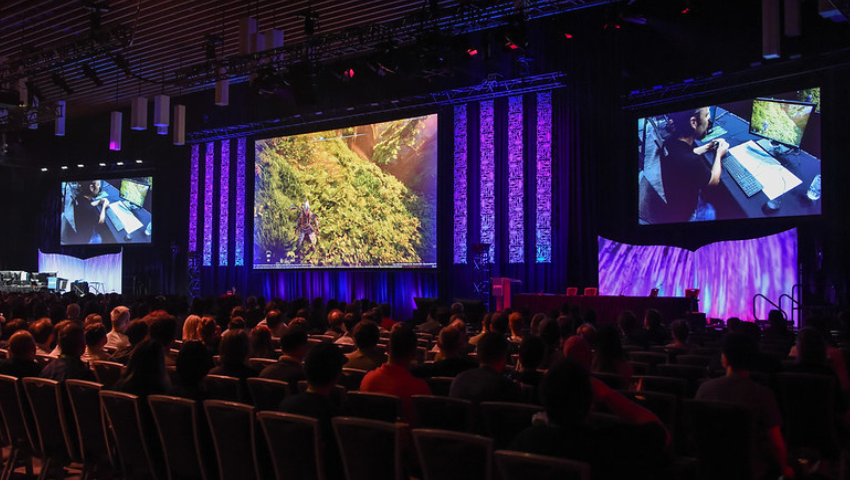 On Wednesday, 10 August, Real-Time Live! returned to the live SIGGRAPH stage for the first time since 2019. After two years as a fully virtual show, Real-Time Live! was just as “punny” and exciting as ever. Conference participants were thrilled to return to the show, as the room was standing-room only with a line out the door! Surely virtual conference participants were just as ready to hop on the livestream.

Before you read a recap of each real-time demo, check out the Real-Time Live! trailer for a glimpse at the projects presented this year:

A Showcase of Decima Engine in Horizon Forbidden West

Viewers saw a number of Decima Engine’s features that enhance the visuals of climate, waves, wind, water, lighting, and more in Horizon Forbidden West. The system showcased details from small features like moss to the grand horizon. Plus, this project took home the coveted Best in Show award.

Unity’s character pose tool showed how users can work with complex, handcrafted constraints even with little to no artistic experience. The poses were quick and natural, and with the introduction of a dog character, the audience was full of laughter at its poses and interactions with the main figure on screen. This project earned the fan-favorite Audience Choice award.

Presented by two contributors, this demo showcased how you can seamlessly switch between designing on a desktop or tablet and using VR spatial controlling. By designing a plant pot and flowers, the demonstrator showed how easy it is to switch methods in the middle of the workflow to see what best fits the design.

Behind the Scenes of ‘The Cavern’ UE5 Cinematic Visual Tech Test

This demo presented The Coalition’s most recent UE5 cinematic visual tech test running in real-time on an Xbox Series X. The contributor showed a breakdown of the visual techniques and pipeline development that enabled them to create the cinematic in a short period of time.

The Hyper Drumhead: A Musical Instrument for the Audio/Visual Manipulation of Sound Waves

Real-Time Live! turned into a concert with these virtual percussion instruments! The contributors showed the audience how this novel, digital musical instrument can be used to intuitively create and control novel sounds. Rock on, and check out our interview with this project’s team.

These contributors demonstrated the rapid editing of the facial performance of the Enemies’ protagonist in Maya with Ziva’s control scheme, deploying the new performance to Unity instantaneously. Then, they switched the protagonist for a new character to show the extent of which Ziva can address data.

With a pipeline consisting of a real-time SLAM algorithm that recovers camera poses from an RGB-D video feed, this project showcased a photorealistic 3D reconstruction from RGB-D video in a matter of seconds.

Real-Time Live! is always “punny,” but this project turned the event into an improve show! The demonstrators invited remote performers to the stage, who acted out a live rideshare performance that incorporates audience suggestions. Yes, there was a lot of talk of cheese during this performance!

Congratulations to the Best in Show and Audience Choice award winners! Full Conference and Virtual Conference participants can watch Real-Time Live! again in the virtual conference platform. Want in on the fun? You can still register to access SIGGRAPH 2022 virtually.