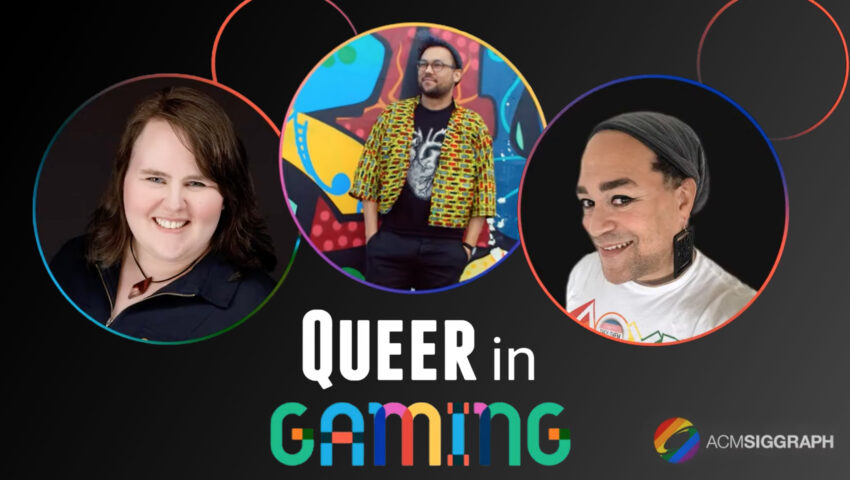 This past spring, the ACM SIGGRAPH Diversity, Equity and Inclusion (DEI) committee hosted a series of conversations around LGBTQ+ identity in the gaming industry. The series, titled “Queer in Gaming”, was organized by committee member Adam Shay (he/him) and hosted conversations with industry luminaries from the gaming and VFX community who identify as LGBTQ+. Each speaker discussed their life and career as well as shared insight on trending industry- and queer-related topics.

In celebration of Pride Month, we are proud to re-share this engrossing series of conversations.

As an associate producer, Shayna Moon has worked with various development teams behind 2018’s “God of War”, which sold 10 million copies and racked up numerous Game of the Year awards. Moon is involved in mentorship and outreach, including volunteering with Amplifying New Voices, a program that helps diverse candidates get educated in the gaming industry.

With over 30 years of digital animation experience, August Alondra Davies knows their way around animation production. They have performed almost every job in the digital animation pipeline, including storyboarding, character and creature design, modeling, rigging, and animation, along with texture painting, camera and lighting, and compositing and editing. Currently the cinematic animation supervisor with Tencent Games, August was formally an animation supervisor with Sony Interactive Entertainment for over 10 years before resigning in 2021.

Nick Murray is a London-based producer, composer, and artist. He is currently making interactive sonic and narrative work focusing on loss and digital cultures. Nick is also a producer for Now Play This, a festival of experimental game design running at Somerset House in London each Spring. In his talk, Nick discussed the intersection of queerness and interactive narrative, his experience working across different art mediums, and how this year’s festival is exploring the relationship between play, games, and the climate crisis.

Register now for SIGGRAPH 2021 to experience other Games content as well as to participate in this year’s Diversity Summit.