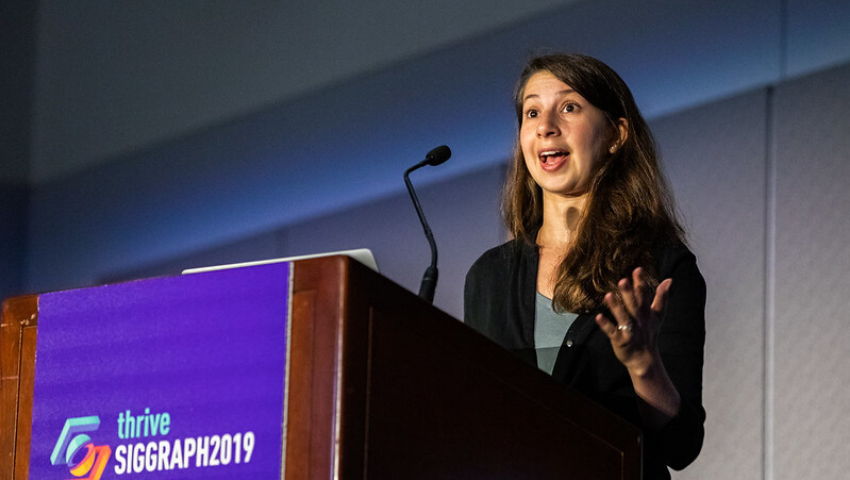 The U.S. recognizes March as Women’s History Month. To celebrate, we are showcasing five female leaders who have contributed to advancements in science and technology. Whether they made their mark last century or last year, these women have paved the way for their industry peers.

Read on and be inspired by their incredible achievements, then comment to share a woman in science who inspires you.

As a Ph.D. student at the Massachusetts Institute of Technology (MIT), Dr. Katie Bouman created an algorithm that would later lead to capturing an image of a black hole in the Messier 87 galaxy. During a postdoctoral fellowship with the Event Horizon Telescope, Bouman published the first picture of the black hole in April 2019. Now, Bouman is a Rosenberg Scholar and assistant professor of computing and mathematical sciences (CMS) and electrical engineering at Caltech in Pasadena, California. Watch her ACM SIGGRAPH Frontiers Talk from SIGGRAPH 2019, or take a deep dive into her work through our story on the ACM SIGGRAPH Blog.

Notable Work: Discovered the Origins of AIDS and Malaria

Dr. Beatrice H. Hahn is a professor at the University of Pennsylvania Perelman School of Medicine. Hahn is one of the leaders who discovered the origin of HIV-1, the virus that causes AIDS in humans. She found that one subspecies of chimp native to west central Africa is the likely source of the virus. Additionally, Hahn also studied the origins of malaria, finding that the most severe form in humans is caused by a parasite originating in gorillas. As a leader in studying emerging infectious diseases, Hahn has and continues to build “basic and translational research programs in global health” that help us better understand pandemics.

Margaret Hamilton had a dream of achieving a graduate degree in math. But, when the Apollo space program came along, her programming job at MIT led to an even greater success. At the lab, Hamilton and her colleagues created core ideas for computer programming while writing code for the first-ever portable computer. Hamilton pioneered software engineering and worked to make it more reliable. She created flexible programs to help solve anticipated and unknown problems and adjusted software to combat potential astronaut mistakes. After leaving MIT in 1972, she founded her own companies, created Universal Systems Language, and received both the NASA Exceptional Space Act Award and the Presidential Medal of Freedom.

Dr. Fei-Fei Li is the inaugural Sequoia Professor in the computer science department at Stanford University and co-director of Stanford’s Human-Centered AI Institute. Li is one member of a small group of scientists responsible for remarkable advances in artificial intelligence. She is the architect of ImageNet, a database that helps computers recognize images, and is also a proponent for the advancement of AI and those who build it. As the founder of a nonprofit that recruits women and people of color to become builders of AI, she has testified in front of the U.S. House Committee on Science, Space, and Technology, noting that AI needs “fundamental changes to how [it] is engineered — and who engineers it,” believing these changes will be “a transformative force for good.”

Dr. Sally Ride was the first American woman to travel to space. She received Master of Science and doctorate degrees in physics from Stanford University. In 1977, NASA searched for young scientists to serve as “mission specialists” on space flights. Ride applied and was selected as one of only five women for NASA’s class of 1978. Ride was a flight engineer for her first mission to space. During her time in space, she launched two communication satellites, operated the shuttle’s mechanical arm, and conducted experiments. Later, Ride was director of the California Space Science Institute and taught physics at the University of California, San Diego. She was passionate about elevating science education and inspiring young women to study science.

Celebrate even more women making waves via our spotlight on female filmmakers in animation. And, if you are a researcher making strides in your industry — just like these women — share your latest breakthrough with the SIGGRAPH 2020 Posters program by 28 April.