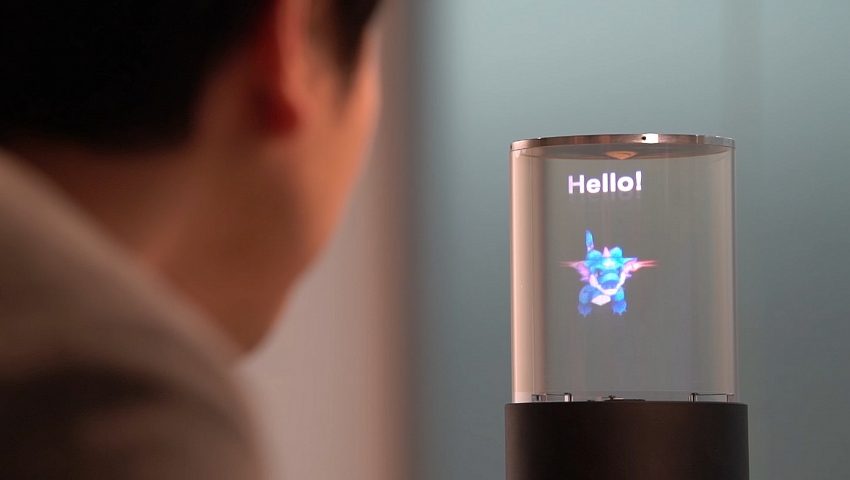 Since as far back as 2011 (see video), Sony Corporation has been working on and perfecting its ability to bring reality to 2D images. In 2019, they succeeded in fabricating a holographic screen with higher transparency and luminance, compared to conventional transparent screens, and displayed that success as part of the SIGGRAPH 2019 Emerging Technologies program.

The emerging technology, dubbed “360-degree Transparent Holographic Screen Display,” proposes a technique for bringing reality to 2D images through a combination of a 360-degree transparent holographic screen display and sensing technology using multiple high-speed cameras. We sat down with one of the project’s lead engineers, Tomoharu Nakamura, to learn more.

SIGGRAPH: Talk a bit about the process for developing “360-Degree Transparent Holographic Screen Display.” What inspired your team to pursue the concept?

Tomoharu Nakamura (TN): Our motivation is to create new image experiences through a new concept display that can project floating images for 360-degree direction.

SIGGRAPH: How did you develop the technology in terms of execution? How many people were involved? How long did it take? What was the biggest challenge? Our audience loves details!

TN: We have succeeded in creating much brighter images on the highly transparent screen by applying a holographic screen to a cylindrical screen display. Our project team is small and the development period is around three years. The biggest challenge was to develop the holographic screen fabricating process, which can realize high transparency, high efficiency, and uniformity.

SIGGRAPH: You note that the holographic screen has “higher transparency and luminance” in your description. How did you achieve this?

TN: We have achieved by optimizing the fabrication process originally. The holographic screen design suited to cylindrical screen system is also important.

SIGGRAPH: What about the technology makes users feel like the image is “actually there”?

TN: If the screen is very transparent, the image can be fused to the background. Then, you feel the image is floating. Furthermore, the motion parallax “generated between the image and the background” can enhance the feeling that an image is “actually there.” In these points, the transparency of the display is very important.

By displaying bright images on a cylindrical transparent display with a holographic screen and imparting motion parallax, according to the movements of the observers, a cylindrical transparent display with a 360-degree position-tracking system can apply a feeling of “actually there” reality to 2D images. If an observer moves around and sees the cylindrical display from different views, the motion parallax 2D image displayed at the center of the cylinder can follow the observer without delay. Therefore, the observer often feels as though a 3D image is inside the cylinder.

SIGGRAPH: What do you find most exciting about the final technology you presented?

TN: Many visitors enjoyed our presented applications, so we feel that we could provide new image experiences. The combination of 360-degree transparent holographic screen display and the sensor devices responding in real time to observer position and hand gestures can create new applications.

TN: There is a possibility that our new concept display will be used as a home communication device, such as an AI speaker that allows the user to feel familiar with the agent by displaying an agent image. In addition, there is an expectation to be applied to various applications, such as enjoying images from multiple people at the same time — from 360-degree direction — and erasing the presence of the display to harmonize with the interior.

SIGGRAPH: What advice do you have for someone looking to submit to Emerging Technologies for a future SIGGRAPH conference?

TN: This was our first time at SIGGRAPH, and it was good to be able to interact directly with visitors with various backgrounds by exhibiting within Emerging Technologies. [My advice would be that] it is important to prepare not only technology to exhibit but also demonstrations that interest and communicate to people.

SIGGRAPH: Your project was one of the most talked about out of the SIGGRAPH 2019 conference. What sort of feedback did you receive from attendees? How are you using that feedback now?

TN: There were many opinions that if the screen size could be enlarged, it could be applied to even more applications. We have since been trying to enlarge the screen size.

Interested in getting your emerging technology in front of SIGGRAPH conference attendees? SIGGRAPH 2020 Emerging Technologies submissions are open through 11 February.

Tomoharu Nakamura is a display device engineer with the Sony Corporation R&D Center.