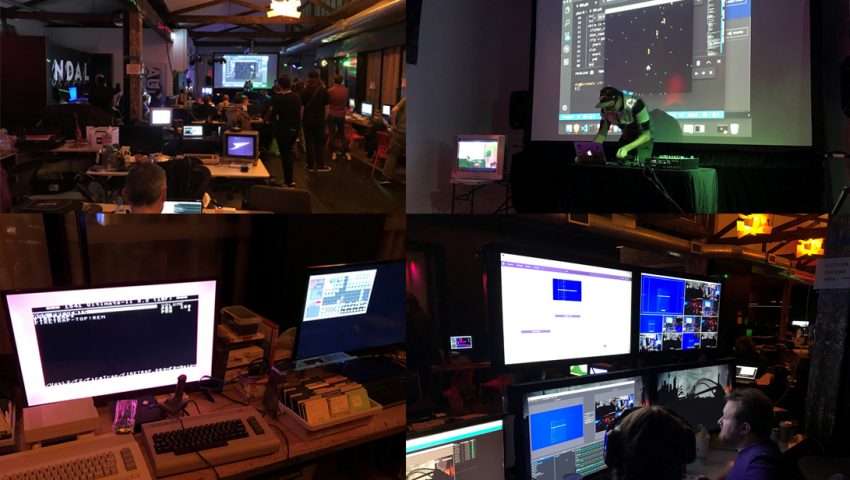 Demoscene events, also known as “computer festivals” or “demoparties,” are places that gather demosceners to spend 2–3 days together, creating music, pixel graphics, intros, and demos, and discussing new techniques, computer graphics, or programming tricks to achieve the impossible. Demoscene productions have many different categories and are driven by limitations, forcing participants to think outside the box, and use creative programming skills to go beyond what was considered possible on existing computers. Categories of demoscene productions can include categories like: 4KB-INTRO (with executable size not more than 4,096 bytes), 64KB-INTRO (size limit of 65,536 bytes), DEMO (size almost without limitations), 4-CHANNEL-MUSIC, PIXEL-GRAPHICS, CRAZY-COMPO (i.e., throwing a floppy disk the largest distance), or SHADER-PROGRAMMING.

Demoscene origins go as far back as the late ’70s and early ’80s, with roots wherever a significant amount of home computers were sold. One of the most interesting phenomena that came out of digital media culture, demoscene is still considered a special, underground-art subculture. Rare but very influential outside itself, the demoscene community is driven by the extreme passion of its participants. For years, demoscene has gathered hundreds who know how to draw pixels using assembly language and produce self-contained — often extremely small in size — computer programs that produce audio-visual presentations. It has also been a place for those who are passionate about music or pixel graphics creations… and who enjoying having those creations judged by the community in a vividly run competition setting.

Notes SIGGRAPH Asia 2019 Conference Chair Tomasz Bednarz, “I was part of demoscene since 1994. I belonged to the group called Amnesty (later known as Absence) as a ‘CODER.’ My favorite programming language until today is x86 assembly — I still exchange SMS messages with my European demoscene friends writing virtual code starting from MOV AX,13H; INT 10H; MOV DI,A000H. It was during my very early demoscene years that I first discovered proceedings from SIGGRAPH, and they changed me forever. “

Click here to see some of Tomasz’s early creations (among other inspirations) and VOODKA demo source code. To view his 2015 presentation on the subject, click here.

John Doolan, SIGGRAPH Asia 2019 Demoscene Program Chair, also shared, “I joined the local demoscene in Newcastle, [New South Wales] in the early 1990s. I met with a demoscene coder who went by the handle Slimer and wrote demos on the legendary Commodore 64 computer. I had already been programming my C64 for years at that point, and had been consistently impressed with the demoscene productions coming out of Europe, but this was my first intro to demoscene techniques. Shortly after, I attended my first demoparty, called ‘The Digital Underground Party,’ where I met many other ‘sceners and joined a group. Much more recently, I have been a co-organizer for the Flashback Demoparty hosted in Sydney Australia annually. I’m also a regular attendee of Australia’s other leading demoparty, Syntax Party, which is hosted in Melbourne.”

For both Tomasz and John, the demoscene community, like SIGGRAPH, is a one that is driven by its passion for computer graphics and interactive techniques, and whose members are open, diverse, and inclusive. For the last few years, SIGGRAPH and SIGGRAPH Asia have seen many overpopulated, demoscene-related Birds of a Feather sessions (run in collaboration with the ACM SIGGRAPH International Resources Committee) that are now must-attend events… even for those who might not know what demoscene is about. This year, we are proud to be bringing, for the first time ever, a DEMOSCENE Program to SIGGRAPH Asia.