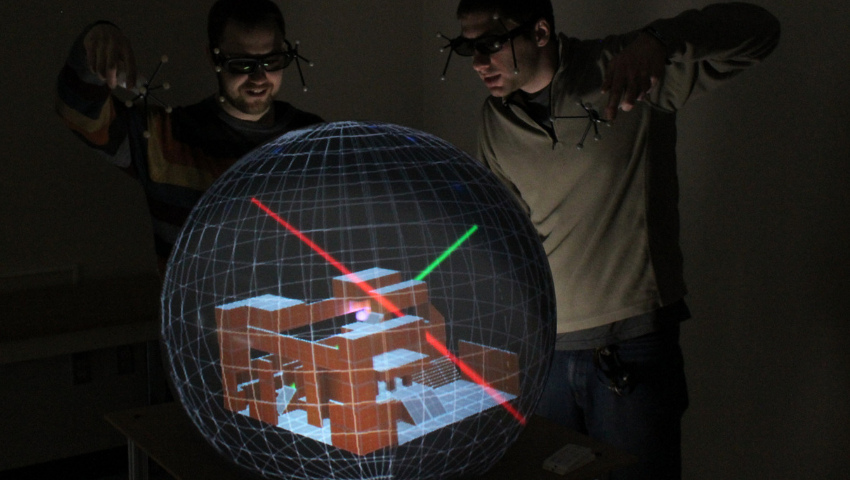 There’s a fear that virtual reality (VR) will turn us into antisocial loners who too regularly escape into immersive fantasies on our own. But with “CoGlobe: A Co-Located Multi Person FTVR Experience,” the VR experience is a shared one — much like playing a board game with friends. CoGlobe, which was shown during the SIGGRAPH 2018 Emerging Technologies program, uses an advanced, spherical, fish-tank VR multi-projector display and additional mobile displays to provide users a highly interactive, collaborative, co-located 3D mixed reality experience. To get a feel for it, check out the video below.

We connected with Ian Stavness, an Associate Professor in Computer Science at the University of Saskatchewan, and one of the masterminds behind CoGlobe, to understand what went into the ideation and creation for CoGlobe, as well as how he imagines CoGlobe existing in the world both now and in the future. Is this the future of collaboration?

SIGGRAPH: So, what was the idea behind CoGlobe? Where did this idea of a VR fish tank come from?

Ian Stavness (IS): The idea behind CoGlobe was to give people the experience of interacting with sort of a magical crystal ball where two people could see some virtual imagery inside of a crystal ball, like it’s sort of sitting there. And then they could play together on a couple of fun games. The main drawing feature was the crystal display: a spherical display that we constructed that has very bright and high-resolution imagery projected onto the surface of a sphere. Then we used three-dimensional rendering to give the illusion that there are actually 3D objects inside the crystal ball.

SIGGRAPH: Can you talk a bit about how the team came together for CoGlobe?

IS: CoGlobe was a collaborative project between the University of Saskatchewan and the University of British Columbia (UBC) in Vancouver. We’ve been working together for a number of years building these types of displays. The reason it was important to have a collaborative team in different locations is that we think these sorts of displays can be very useful for communicating between locations. In fact, UBC has a crystal display in their lab, and we have our own crystal display at the University of Saskatchewan. The idea is that we can have two displays working together, and you can have people on both sides be able to communicate about the same virtual scene.

SIGGRAPH: How was CoGlobe put together, technically speaking?

IS: We use two different techniques to give the impression of 3D. The main technique is called head-tracked rendering, so we keep track of where the person is looking at the sphere, and then we render the 3D from the perspective of that. The person using the crystal display gets this window into the sphere that looks 3D; but, if you’re standing outside, it looks kind of distorted because it’s not a direct perspective. And then we also use stereo glasses or slicker glasses to be able to give a single person stereo use, as well, so they get another perspective. This also allows us to bring two people into the display. We can block out the view for the first person and the second person gets their perspective rendered, and vice versa.

For the CoGlobe experience, we coated a Plexiglas sphere with projection paint, and then we used multiple projectors to seamlessly blend onto that spherical surface. We wanted much higher-res imagery on the sphere, so we used many small projectors underneath, all shining up onto different parts instead of a single projector. This makes it less expensive, because the single projector is like a movie theater projector, which is very expensive. We used really inexpensive commercial projectors that are a few hundred dollars each.

IS: The main difference between this sort of spherical virtual display as compared to a virtual reality headset display is that the virtual content is sort of part of the real world, and the displays are in the real world as well. The main advantage of this is that is it makes it easier to talk with other people in the room while you’re interacting with virtual content. With virtual headsets, you’re very immersed in the virtual world, so it makes it hard to communicate with other real people in the real world. We think these sort of displays can fit much better in the context of a workplace or a living room or a classroom, where you want to interact with and see some virtual content or play a 3D game, but you also want to be able to play with your neighbor and talk about what’s happening in the display.

SIGGRAPH: What game did people play through CoGlobe in Vancouver? Did any of the reactions surprise you?

IS: The game we had people play at SIGGRAPH was a fish-finding game. There were a number of goldfish swimming around, through aquarium-like statues and objects, and plants were moving around with, kind of, a water effect. We gave people little laser wands and they were directed to find the same fish and shine their laser beams on it, together, in order to catch the fish.

The thing that surprised us the most was seeing how naturally people were able to work together in the context of a spherical display. Often, in very natural ways, the two people would communicate with each other and move together in order to accomplish a task. The other thing that’s quite unique about seeing people use the display is that they very naturally changed their perspectives, so they would move their head or their body to a new position while, at the same time, using their hand to point to the display. You see these sort of very natural motions both for individuals when they’re interacting with the display as well as when two people are interacting simultaneously.

SIGGRAPH: How do you see CoGlobe existing in the world?

IS: I think the most exciting aspect is making these technologies really a commodity item that can be in every person’s living room or in the workspace — on their desk. The technology is inexpensive and relatively easy to put together, so we can really push forward all the 3D interactive techniques seen at SIGGRAPH and bring it into people’s lives in a really meaningful way. 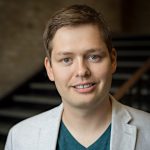 Dr. Ian Stavness is an Associate Professor in Computer Science at the University of Saskatchewan. He directs the Bio- Interaction & Graphics (BIG) lab focused on 3D modeling, image analysis and visualization. He completed a post-doc at Stanford University at the NIH Center for Biomedical Computation and his PhD on 3D physics-based simulation at the University of British Columbia in 2011.