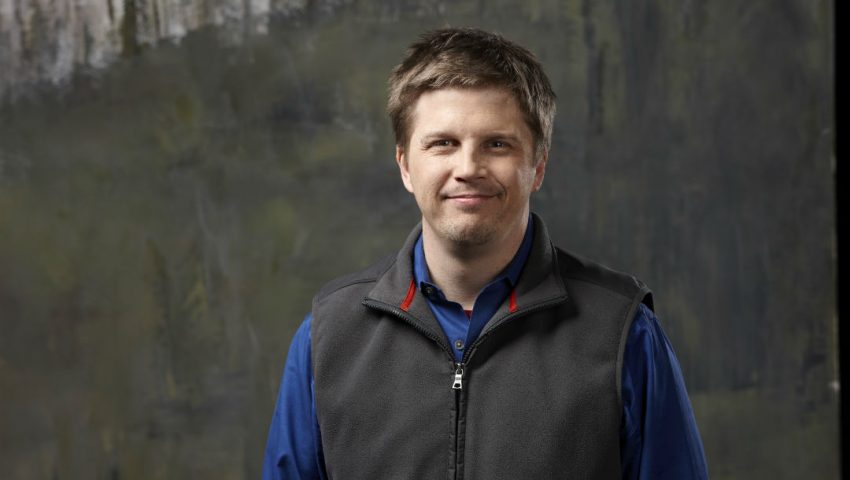 Awards buzz is brewing and “Kubo and the Two Strings” has now grossed nearly $70 million worldwide. What was the production process for the film like? Peak into the mind of VFX Supervisor Steve Emerson, who recently sat down with us to discuss both the film and his 25-year career in entertainment. 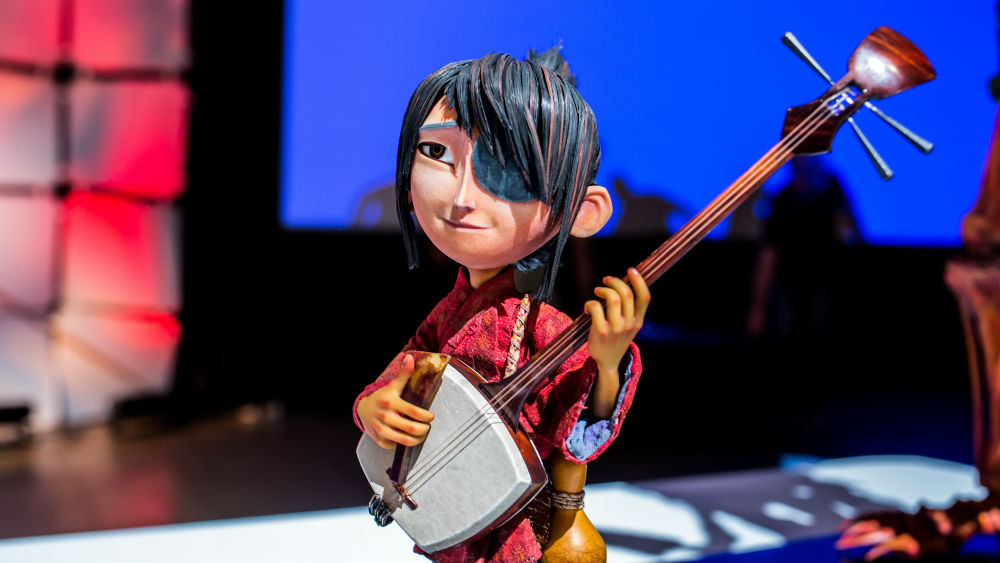 SIGGRAPH: Tell us a bit about your background and how you came to work on this project.

Steve Emerson (SE): I’ve been working in film and TV production for 25 years. My focus shifted to visual effects (VFX) in the mid-90s and I’ve had the opportunity to work on many television shows, feature films and large-format, IMAX productions. I joined LAIKA in 2008 during the production of “Coraline” and never left. I feel very fortunate to have had the opportunity to work on all four of LAIKA’s films. I love this studio and am extremely proud of the work that we’ve done.

SIGGRAPH: In your short bio on LAIKA’s website you list “Compositing Supervisor” as your childhood dream occupation? Can you share with current students within ACM SIGGRAPH how your career path led you from there to where you are today?

SE: Whenever I speak to students I always stress the importance of attitude, personal relationships and, of course, skills. My first open door came through a friend who introduced me to a television director. He liked my attitude and enthusiasm, so he gave me an opportunity that required very little skill. But I worked extremely hard, made a lot of friends and broadened my understanding of the production process. That hard work and those relationships led to more opportunities. And I continued on my path until I landed where I am today. It took a long time.

I’d encourage students to work as hard as possible to develop their skills early on. These days, software is cheap and the web is filled with professional-level training that they should be taking advantage of. They should put the time in and create a really strong reel. Then I’d focus on relationship building. Call recruiters and send them your reel. Introduce yourself to them at festivals or conferences. Be enthusiastic and persistent, but don’t annoy them. If you have the skills and you’re on their radar, opportunity will come. You just have to be patient and persistent and work to become a better and better artist while you’re waiting. Then, when you get your shot, you’ll be ready for it.

Film productions can be intense. Hours can be long. I spend more time with co-workers than my family.

Be the type of artist that people WANT to work with.

Work hard, do good work, be reliable and be kind to your co-workers. If you’re that type of artist, once that first door opens, you’ll never have problems finding work.

SIGGRAPH: As a veteran in visual effects and this film’s VFX Supervisor, what was your experience working with a first-time director on “Kubo and the Two Strings”?

SE: I was very excited about the opportunity to work with Travis Knight as a director. We’d spent plenty of time together prior to “Kubo,” and, going into it, I knew from past experience that he was a great communicator and had a very strong artistic eye.

The hardest part of being a VFX Supervisor is getting inside a director’s head. You need to understand the types of things a director is sensitive to as well as the types of visuals that will get them excited about the work — and you want to get there quickly. If you do, you’ll have more time to sweeten shots and make them as dynamic as possible. I think “Kubo” is LAIKA’s most beautiful film to date, and I credit Travis for that. He had a very clear vision and we never wasted time trying to find it. He was always very specific with his direction. He knew exactly what he wanted. 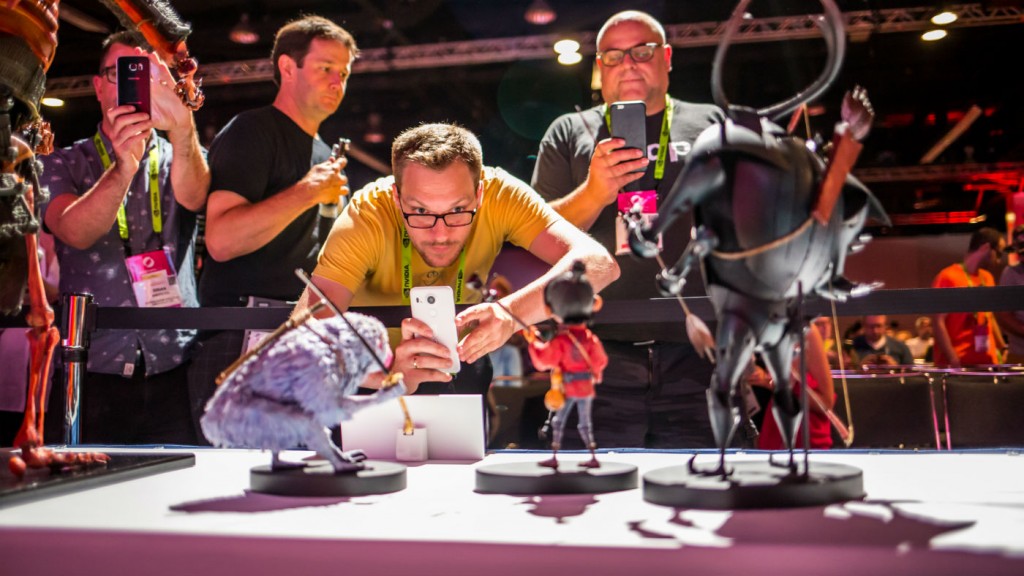 SIGGRAPH: The stop-motion/CG hybrids of LAIKA lore are quite different from projects you worked on before joining their ranks, such as “300” or “The Dark Knight.” What do you like best about VFX for animated projects? What do you miss most from your past work?

SE: Because LAIKA is creating real world sets with physical puppets, our workflow is actually very similar to typical, live-action visual effects. The only difference is scale and the fact that we are creating performances one frame at a time using puppets instead of humans. The biggest challenges are making sure that the scale is correct and handling the intense elements of design. LAIKA’s worlds are heavily art-directed and everything is handcrafted. Software for live-action visual effects is made to recreate elements of the human world, but not for recreating asymmetrical components with hand-painted, houndstooth patterning born from pieces of dog toys that an art director bought at a random convenience store on the way home from work. We’re never creating clouds. In LAIKA’s worlds clouds are made of ballerina tutus, oceans are made of garbage bags. It’s an added level of complexity that is incredibly challenging. I’m fortunate to be collaborating with some incredibly talented visual effects artists who are able to problem-solve every curve ball that comes out of the art department.

I’d say that’s what I like most about visual effects for stop motion films &mdash overcoming those challenges with the VFX team while collaborating with all of the other departments and creative leadership at LAIKA. As far as what I miss, not much. The culture, quality of projects and work-life balance at LAIKA are unlike anything I experienced prior to coming to Portland. It’s a great place to be.

SIGGRAPH: The awards buzz is brewing for “Kubo” and the National Board of Review has even chosen the film as its pick for 2016’s best animated feature. What does this kind of acclaim mean to you professionally and personally?

SE: That it’s worth it. These films are REALLY hard to make. They are long, arduous, intense processes that take a toll on everyone involved. They’re marathons.

But stop-motion aside, I’d say that if you’re considering a career in film production or visual effects, prepare yourself to make personal sacrifices. LAIKA is a great place to work. They stress work-life balance and want artists to have lives outside the studio. But prior to coming here, there were many years where I’d put in 80-hour work weeks and at the end of working a Saturday, my supervisor would ask me if I could come in and work a Sunday as well. I’ve made a lot of sacrifices and missed many personal moments, particularly with my family.

There’s nothing worse than giving your all and making those types of sacrifices only to see that the final project isn’t very good. But at LAIKA, that hasn’t happened. Every time we finish a film, I can’t wait to share it with my friends and family. There’s an enormous amount of pride in the work that we are doing — and hearing that critics and audiences are enjoying and appreciating “Kubo,” to me, it’s validation that what we’re doing — as crazy as the process can be — is worth it.

SIGGRAPH: Share your favorite story from the production of “Kubo.”

SE: There’s always one shot that is a back-breaker. For “Kubo” it was one of the shots from the storm sequence (Kubo and the other characters are aboard a boat made from leaves and riding an enormous wave). At the head of the shot, they’re off in the distance and the wave carries them toward camera. They’re surfing the wave as it comes crashing down in close-up. That shot wouldn’t die. We started on it at the beginning of the production and two years later, Travis finally bought it. To celebrate, the VFX production managers built a piñata that looked like Kubo’s boat and the entire team went out into the parking lot and beat it with a bat. When it broke open, instead of candy, those tiny, airline liquor bottles fell out. We gathered them up and celebrated.

SIGGRAPH: If you could use one program (technology) for the rest of your career, what would you choose and why?

SE: I’d pick Nuke, the Foundry’s compositing software. It’s dense and intuitive and you can do pretty much anything you want with it. If I’m fortunate enough to keep working with these stop-motion animators, I can huddle behind my monitor and make sure they’re covered for a post-fix when they accidentally bump into a prop or a light or step into frame mid-exposure.