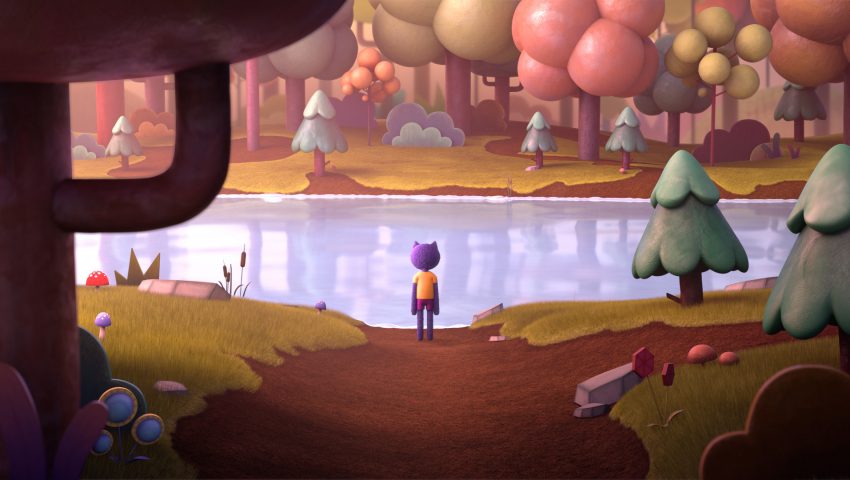 This year’s one-night-only Computer Animation Festival Electronic Theater takes place tonight and the team is honored to present Best Student Project to a six-student team out of France’s Supinfocom Rubika, led by Élise Simoulin, that tells a story focused around mental health, friendship, and growth. We had a chance to talk with Élise, who will represent her fellow creators Clotilde Bonnotte, Edouard Heutte, Anna Komaromi, Marisa Di Vora Peixoto, and Helena Bastioni during today’s ceremonies, about the inspiration behind “Stuffed,” how the film came together, and what the team hopes the audience takes away at SIGGRAPH 2019.

SIGGRAPH: Talk a bit about the process for creating “Stuffed.” What inspired the idea for the film?

Élise Simoulin (ÉS): I mainly wanted to discuss relationships. I wanted to place two characters together, make them overcome their fears, and grow up. From there, the story evolved and became what “Stuffed” is today! This is an important subject to talk about — how opening up to people can not only help you feel better, but also cure you and allow you to grow.

SIGGRAPH: What was it like working with such a large team? What kind of challenges did this create and how did you handle them?

ÉS: Everyone had a specific role to play on our team. These roles were decided very early in production, so the process was pretty smooth, especially thanks to Clotilde, who took care of all the planning. We were constantly checking to make sure we were on schedule, and if someone was a little behind we always found a way to make it work.

In terms of challenges, you have to always think about what’s best for the project and put your ego aside. We also found that communication is key.

SIGGRAPH: Did you face any extra roadblocks as students?

ÉS: We definitely had to learn a lot “on the spot,” and this was dependent on what the making of the film required. Other than that, we had the huge benefit of being free to do whatever we wanted, along with the help and support from our teachers.

SIGGRAPH: Did you work with any mentors?

ÉS: Yes, they were very understanding and helpful. If there were disagreements over aspects of the film, we would have a discussion and explain why we really wanted to do things a certain way. Also, twice during the year, we were able to do a Skype call with Erik Smitt, director of photography at Pixar [Animation Studios], and he helped us make our mood and lighting choices.

SIGGRAPH: Let’s get technical. What was it like to develop the film in terms of research and execution?

ÉS: Making the film started off with the story and early pre-production, which was done by myself with the help of our teachers. This lasted for about three months, and then the rest of the team joined to take care of the remaining pre-production. We were given one year, our final year of studies at school, for the production of the film.

We used Yeti in Maya to add fur to the characters, Nuke and Houdini for the monster, and Photoshop and Mari to paint the textures.

The biggest challenge was that we wanted the film to look like it was made in stop motion, and this affected most of our technical and artistic decisions, but we also wanted to remain faithful to the colors and styles from pre-production. We had to keep this in mind while working on look development in order to find a style that suited us and get the right balance between realism, details, and colors.

We also knew early on what main technical and rendering issues we would face to achieve the look we wanted. We wanted the characters to be stuffed toys, so we knew that we would need fur (Yeti), but this meant that the render time per frame would get longer. On top of that, we had to make a cotton monster, and, at first, we absolutely had no idea how to pull this off. We initially thought of using fur for this, too, but we were scared that the render time would get too long, so we decided to make it as a cloud. We spent months looking for the right parameters, but it was worth it!

This also meant that we had to alter the storyboard and layout. We avoided using camera movements and had to scrap some scenes while still fighting for the ones we really thought were necessary.

For the actual animation, to emulate the feel of stop motion, we tried to animate straight ahead as much as we could, instead of making key poses and then refining the animation. It was important that the animation did not look too perfect, smooth, and computer-generated.

SIGGRAPH: What message do you want the audience to take away after watching this? Is there a certain feeling you’re hoping to convey?

ÉS: We hope that people will get that the core message of “Stuffed” is, when possible, to not isolate yourself if you are feeling down, depressed, or anxious. Let people in if they are reaching out to help, and do not bottle up your emotions. Conversely, offer help to those who need it.

We also hope that children watching the film will learn something about relationships…and start to learn the ukulele!

SIGGRAPH: What’s next for “Stuffed”? What kind of impact do you hope to see long term?

ÉS: We are already very happy with the film’s career, we hope it will continue to be watched. We also love hearing what people think of the film and are glad that it is being shown outside of just children’s festivals, as it is a film for everyone that is touching so many people around the world.

SIGGRAPH: Since SIGGRAPH 2019 will be your first time at the conference, tell us what you are most looking forward to.

ES: We’re really honored to be able to physically represent “Stuffed” at SIGGRAPH for the evening. We are also looking forward to meeting new animation artists, great discussions, and seeing inspiring work!

SIGGRAPH: What advice do you have for other students or anyone else who might be looking to present their work at SIGGRAPH?

ÉS: Always keep in mind that you make a film to tell a story, not to win a prize. The most important thing is to believe in your story, choose a graphic direction you like, and stick to it.

“Stuffed” is a French graduation film made by a team of six people (left to right below): Élise Simoulin, Clotilde Bonnotte, Edouard Heutte, Anna Komaromi, Marisa Di Vora Peixoto and Helena Bastioni. The film was made during their fifth year at Supinfocom Rubika in Valenciennes.