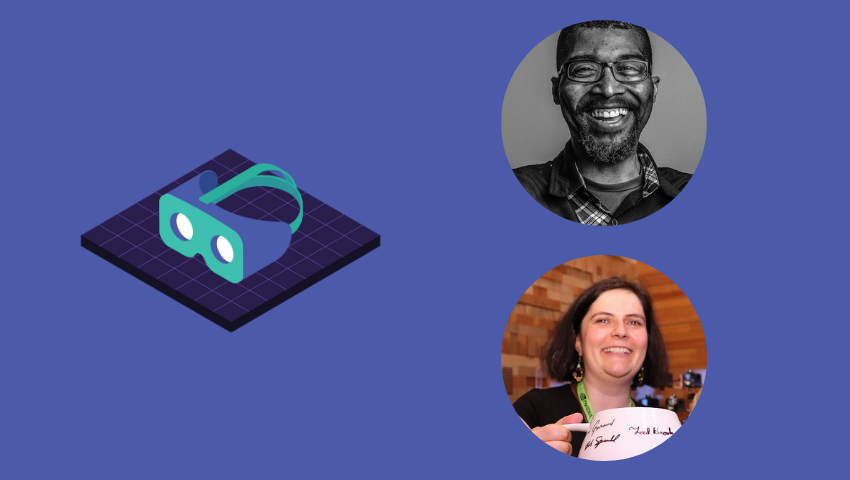 Get to know Laura Trutoiu (Magic Leap) and Bruce Wooden (Oculus), two members of the SIGGRAPH 2019 Immersive Jury. Read on to learn the best career advice they have received, how they tap into their passions, and their most meaningful contributions to the industry.

Laura Trutoiu (LT): Peter Shirley, who is a great teacher and graphics researcher, has a theory I really like. Pete says it’s really common sense to go above and beyond to help junior folks. First of all, it makes the world a better place. Second, these people are likely going to be the folks giving you your next job. My take home is always pay it forward and help others.

Bruce Wooden (BW): “The most valuable resource anyone has is their time.” —Dad

LT: We’re at an inflection point with how we integrate technology into our lives, and a lot of what we do today is split between the digital and the physical worlds. We sometimes even get lost in perusing digital information and lose track of the physical environment around us. I like to imagine computing more meaningfully blended into our daily life where we are not tied to a desktop or phone. I see spatial computing and mixed reality as way to maintain our attention in the physical world. Instead of getting humans to lose themselves in a digital world or worlds, we can get digital information and objects to live with us in our physical world.

BW: Virtual reality has the incredible potential to enable humans to communicate and collaborate in ways that are richer, deeper, and more flexible than ever before. The opportunity to help realize this industry’s potential is truly special.

LT: One of the key applications for AR/VR/MR is to enable rich, face-to-face communication. A few years ago at SIGGRAPH, we showcased the first VR headset equipped with deformation sensors to track and animate your expressions on an avatar in real time. I led the project on the Oculus side, and we collaborated with USC on the computer vision part. It’s great to see that, by now, there are a few different solutions out there that will allow you to do that.

BW: Helping to create the Silicon Valley Virtual Reality (SVVR) organization is something I am very proud of. SVVR has helped thousands of enthusiasts, innovators, and entrepreneurs to connect and collaborate over the common passion of VR.

SIGGRAPH: What’s one thing you keep at your desk that you can’t live without? Or that inspires you?

LT: As a researcher and engineer building new devices, I’m always amazed and inspired to see what content creators build with spatial computing and mixed reality. Building tech that enables people to tell their story is a very powerful motivator.

LT: Just last year, at SIGGRAPH 2018, there were two “VR@50” events centered around Ivan Sutherland and his demo of the first mixed reality headset. I had the pleasure of organizing the events with Henry Fuchs. The panelists and speakers are responsible for inventing and shaping much of the graphics industry, and their lessons are so worth sharing. 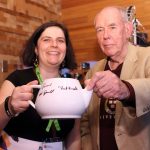 Laura Trutoiu is a senior computer scientist at Magic Leap’s Advanced Technology lab in Seattle. Her research interests span computer graphics, novel sensing, human perception, and their applications to virtual and augmented reality. Prior to taking the leap, she was at Oculus Research in Redmond, Wa. She holds a Ph.D. from the Robotics Institute at Carnegie Mellon University, where she was part of the graphics lab, and did stints as a mouseketeer at Disney Research, Jedi-in-training at Industrial Light & Magic, and visiting student at the Max Planck Institute for Biological Cybernetics in Tuebingen, Germany. She graduated magna cum laude with a B.A. in computer science from Mount Holyoke College. In Romania, where she grew up, she used to have a lot of fun with math olympiads and attended the International Computer High School of Constanta. 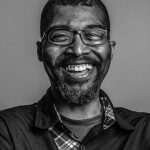 Bruce Wooden is an evangelist, speech-giver, consultant, and is passionate about VR experiences and immersive education. He is the co-founder of SVVR and AltspaceVR. He earned his startup stripes at AltspaceVR, where he focused on building communities (both user and developer) and crafting a great social VR experience. Many know him by the alias “Cymatic Bruce,” VR evangelist. In that role, he co-founded SVVR (now with more than 6,000 members and an annual conference), contributed articles and content to the virtual reality news site RoadToVR.com, and hosted a regular show on VR experiences (“SundayVR” with Cymatic Bruce) that garnered 1.7 million total views between Twitch and YouTube. In his pre-VR life, he was as a science and technology educator, committed to developing and delivering content to students that was provoking, entertaining, and enriching. He has developed and delivered courses for video game design, web design, and various topics in physics, chemistry, and engineering.