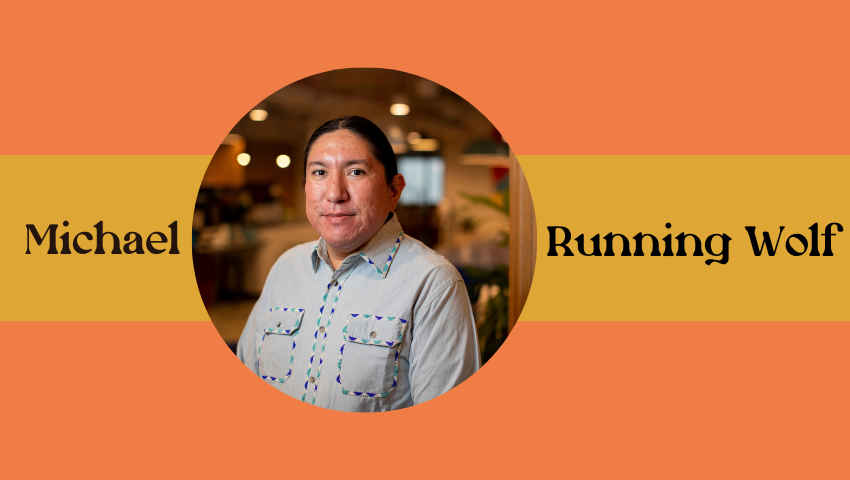 Thinking about heading down a new career path? Here’s a story you don’t want to scroll past! SIGGRAPH sat down with Michael Running Wolf (AI ethicist and co-founder of Indigenous in AI/ML) to learn about his exciting career journey, his upcoming speech recognition research, and his goal of bringing VR experiences to Native communities. Find inspiration in the way he reinvents himself and takes on new opportunities without any fear of the obstacles he may face.

SIGGRAPH: Tell us about your career to date. What inspired you to get involved with AI research?

Michael Running Wolf (MRW): I’m from a small, rural Montana village on the reservation where my parents spoke their language fluently. We didn’t get reliable electricity or even a telephone until I was about 15 years old. Somehow, through a combination of my parents and my math teacher, I got interested in computers. I then went to school at Montana State University where I got my bachelor’s in computer science and began working in the industry for a while before I decided to go back and get my master’s.

More recently, I got into virtual reality with a specific interest in language recognition because the state of technology for Indigenous language education is quite terrible. I believe technology should be more readily accessible to the community. During the process of transitioning into this field, I became aware of a lot of legal issues around ownership and ethics around data which led me to become a data activist.

I wanted to be closer to the action. I made the move to Seattle and started a job at Amazon where I was selected to work on Amazon Alexa, also known as “Her” in the office so we don’t set off all of the devices at once. Being surrounded by like minded individuals was inspiring because it was leading me to set out to achieve my dream of putting on a VR headset and being able to speak Lakota, and speaking my mother’s and father’s tribes’ languages in the VR.

In 2019, I was at a language conference in Hawaii where I met a Maori research group, Te Hiku, who created the first Indigenous AI voice. This Maori organization then began to mentor me. They helped me bootstrap my own initiative in North America, which was to work with a Kwak’wala language community. Their language is fundamentally incompatible with Western AI. For example, even if we have a million hours of annotated Kwak’wala audio, it wouldn’t work with the current technology. So I focused my research on this and related languages. Currently, I’m earning my Ph.D. and continuing my research at McGill University in Montreal.

SIGGRAPH: You are using immersive technologies and AI to pursue Indigenous language and culture reclamation. What discoveries have you made thus far? How do you see this work evolving in the future?

MRW: From the AI perspective — my research focus — Indigenous languages are more difficult to work with than Western languages because they are highly polysynthetic and current systems assume that there’s a finite dictionary. It’s very typical that the voice AI only recognizes 50,000 words, which doesn’t seem like much. However, the average college-educated American only uses 8,000 words, so 50,000 is a lot, but not when in the face of infinity. The languages I work with have as many words as there are stars in the universe. What’s more? We have very little data compared to Western languages, like English. It is not all bad news though.

My peers and I theorize that from a computational perspective that it’s easier to work with these languages since they are highly regular. Also, we’re finding a lot of barriers that you see in English — preconceptions of difficulty that are existing in Western languages — simple do not exist. My hope is that with very limited data, we can create a new AI voice for communities versus the millions of hours required for Western languages.

SIGGRAPH: What is one project you were involved in creating or developing that you are most proud of, and why?

MRW: I was funded back in 2017 by Google and Facebook to create a documentary about the Dakota Access Pipeline Protests. There was going to be a pipeline that runs straight through the Missouri River. There was a lot of scientific evidence that this was going to be highly dangerous, especially for the Lakota, my tribe, who rely heavily upon the Missouri River and everyone who is downstream. This could disrupt the natural ecosystem and destroy a lot of cultural artifacts and sites. We went out to document, using our VR camera, the peaceful protests, and we were not met with the same type of respect. We had a VR camera that was attached to a car battery and went around collecting stories from the protestors to show a narrative that this protest was nonviolent. This was my most proud moment because I was able to contribute to history and record what was really going on.

SIGGRAPH: Share the best career advice you’ve received to date and who gave it.

MRW: I have two people in my life who have given me the best career advice. The first advice I received was from my advisor in college who told me to always keep learning. I pivoted my career probably five or six times within the computer science field. I started out as a data person, then switched to VR, and now I’m an AI person with the hope of merging my VR experience with AI.

The second piece of advice I received was from a previous boss who told me to always be looking for your next job, even if you’re happy. I’m always hungry for the next adventure, and it’s important to be searching for it rather than waiting for it to happen. Also, you can’t count on your current situation because things are constantly changing, whether it’s the economy or reorganization within the company. I thought I would work at Amazon forever, but then I felt a need to change things up and try something new, so I reached out to a contact I have at Northeastern University and became a clinical instructor. Always be prepared to reinvent yourself!

SIGGRAPH: Do you currently have any upcoming projects in the works?

MRW: I’m creating an AI reality lab where we combine artificial intelligence research with virtual reality research to create engaging experiences. I’m working on the foundational AI technology for automatic speech recognition, but that is not my final goal. My goal is to put my work on a VR headset and enable Native communities to have AI or XR experiences. VR is able to transform your mind as if you were there and create this immersive experience that can construct the ideal learning environment.

SIGGRAPH: What does presenting at and being involved with SIGGRAPH mean to you?

MRW: It was a lifelong dream to present at SIGGRAPH! In 2014, I was at a conference in Berlin where I had my first experience with an Oculus headset. It was such an amazing, roller coaster-like experience, and I’ve been a VR nerd ever since. I started researching articles and watching videos to learn more about it, and that’s when I came across ACM SIGGRAPH. I said I wanted to go there one day because I bet they have the coolest toys and the coolest people to talk to and learn from. Being able to talk to the engineers that built technology at SIGGRAPH conferences has been uplifting for me and led to many great conversations among my peers. Then getting the opportunity to be a speaker was life changing. It led to more exciting conversations, and now I was on the other end where people were asking me questions.

Discover more exciting stories from the SIGGRAPH community via the career profiles on the ACM SIGGRAPH Blog! Read more.

Michael Running Wolf is a citizen of the Northern Cheyenne with Lakota and Blackfeet family ties. Michael has a bachelor’s and a master’s of science in computer science and is the co-founder of Indigenous AI LLC. He is a former engineer for Amazon’s Alexa and a former computer science instructor at Northeastern University focusing on AI, computer science, and mixed reality. He is an AI ethicist who is passionate about Indigenous language and culture reclamation. Since 2019, Michael has been pursuing technical strategies to create Indigenous ASR and received a MIT Solve Fellowship and Patrick McGovern AI for Humanity Prize to work with highly polysynthetic languages in the Pacific Northwest. Michael recently started his Ph.D. in computer science at the University of McGill, where he is continuing this work building an automatic speech recognition system for Indigenous languages.