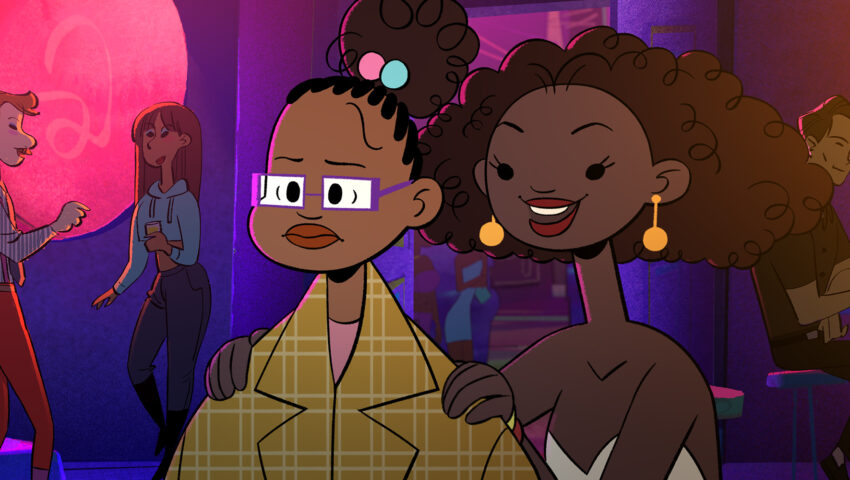 Premiering today as part of the SIGGRAPH 2021 Computer Animation Festival Electronic Theater and launching on Disney+ this fall (10 September), “Twenty Something” is part of Pixar Animation Studios’ latest SparkShorts lineup and is a story about the insecurities of adulting and how we’re all just faking it ’til we make it. We caught up with Director Aphton Corbin to learn a bit more about the project, which mixes hand-drawn animation with use of computer software.

SIGGRAPH: Tell us a bit about the process of creating “Twenty Something.” Was this the first short film you wrote/produced at Pixar? How was it different from other projects you’ve worked on?

Aphton Corbin (AC): “Twenty Something” was the first short film I made at Pixar! It was my debut in both directing and writing! Up until “Twenty Something,” I was a story artist, so getting a change to direct something on my own was exhilarating!

SIGGRAPH: What was the most technically challenging aspect of working on “Twenty Something”? How did you overcome it?

AC: There were SO many challenging aspects about “Twenty Something,” one of them being that we had to work completely remotely due to COVID-19. Having to do layout and compositing reviews from home proved to be extremely challenging. Luckily, I had a hardworking, dedicated team that pushed through awkward Zoom sessions to create an amazing film.

SIGGRAPH: “Twenty Something” deals with the very modern concept of adulting. Why did you feel it was important to tell this story through animation?

AC: Though the phrase “adulting” is modern, the struggle of transitioning into adult life is timeless! Everyone feels out of place from time to time, and what better way to portray feeling like a child than in a medium usually reserved for children’s entertainment?

SIGGRAPH: The colors and style of “Twenty Something” are so unique and vibrant. Walk us through how you landed on the final look for the film.

AC: I worked with my background painter to create the colorful world of “Twenty Something.” I wanted to create a visual metaphor with the color choices that showcased [lead character] Gia’s kid personality clashing with the adult world.

SIGGRAPH: What advice do you have for other filmmakers submitting future work to the SIGGRAPH Computer Animation Festival Electronic Theater?

AC: Make work about things you know! I try to relate to people in my work by using my personal life experience. Don’t be afraid to share yourself, oftentimes others are feeling the same way you are, too.

If you have not already, get tickets to the Electronic Theater today for access to this and other incredible selections. And, if you’re interested in hearing more behind-the-scenes of this Pixar short, don’t miss the live-only panel “Electronic Theater Directors’ Special Session” feat. Aphton on Thursday, 12 August at 2:30 pm PDT or the on-demand Talk “Cartoons in the Cloud” (available now through 29 October).

Aphton Corbin began at Pixar Animation Studios in 2016 as a story artist on the Academy Award®-winning feature “Toy Story 4.” She also worked as a story artist for Pixar’s latest feature film “Soul,” which is now streaming on Disney+. Corbin most recently made her directorial debut on her SparkShorts film “Twenty Something,” which will debut on Disney+ this Fall. As a story artist, Corbin helps the director visualize their film in storyboard form. The artists provide the first representation of the movie to determine if the story elements are working well. Raised in Richmond and Sacramento, CA, Corbin attended Pleasant Grove High School and graduated from California Institute of the Arts. She currently resides in Albany, CA.