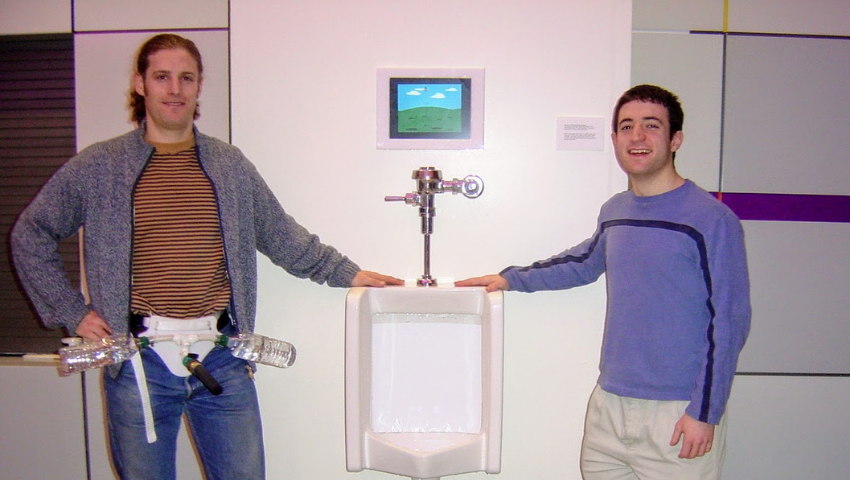 Dan and Hayes pose with the “You’re In Control” prototype in 2002.

The Emerging Technologies program at SIGGRAPH conferences has a long history of showing attendees a mix of the latest technologies in computer graphics and interactive techniques. Each year, the program receives 4-8 times the number of submissions it can accept, which means that some work is not accepted. Recently, we spoke with the creators behind one such work, Dan Aminzade and Hayes Raffle, about their 2004 technology “You’re In Control”, which they built as graduate students at the MIT Media Lab. Check out a demo of the project below, then read on for insight from its creators.

SIGGRAPH: What is “You’re In Control”?

Dan Aminzade (DA): “You’re In Control” is a video game urinal that allows you to play while you pee. We mounted a screen above a urinal and devised a sensor that could be placed in the urinal to detect the position of your stream and allow you to control the game on the screen.

The game we did initially was a version of Whack-a-Mole, where moles would pop up and you would try to hit them with your pee.

Hayes Raffle (HR): I was impressed with our run of puns, especially our follow-up game, which we made for the 2004 election: “You’re A Nation”.

SIGGRAPH: How did you come up with the idea for the project?

DA: We were taking this class [called] “How to Make Almost Anything”, and [our professor] encouraged us to do a final project that combined technology with making a physical artifact. I had the idea for the game, but it wouldn’t have gotten anywhere if Hayes hadn’t teamed up with me. He drove the physical design. He got the urinal from his landlord and built a free-standing, sheet-rock wall.

We had to experiment quite a bit to figure out how to detect the urine stream. We tried using a pressure sensor and that didn’t work at all. Hayes was the one that realized we could use piezos. They make a small current when touched that we could then build a circuit to amplify and filter. Hayes figured out most of that.

HR: It’s one of those nice, surprising outcomes you get at a place like the [MIT] Media Lab. They admit a computer scientist that’s creative, like Dan, and a creative person like me who’s technical. I had a fine art background in sculpture and fabrication. I was trying to figure out what to do for my final project. Dan and I were joking around when he said that there’s this project he thought about doing. He told me about “You’re In Control”, and I thought, “That’s way better than anything I’ve come up with yet. Let’s just do that together.”

We did end up having to do a fair amount of innovation. MIT ended up patenting the sensor. It was effectively an array of small drum heads. You could get not only position, but also intensity.

SIGGRAPH: What was the resolution?

DA: You could interpolate between sensors based on the intensity, so the effective resolution was actually higher [than 4×4]. We had to mechanically isolate the sensors enough so that they wouldn’t all shake — you want one to trigger and the neighboring ones to trigger a little.

HR: We ended up using rigid Mylar with foam in between to isolate them.

DA: In the next evolution, you would pee directly on the screen. If we did it today, we’d use computer vision, assuming you’d be comfortable having a camera in a urinal. There are some privacy concerns there, I guess.

SIGGRAPH: You were both students at the time.

DA: We were both grad students under Hiroshi Ishii.

SIGGRAPH: What was his reaction, or the reaction of others in your class?

DA: Not good. [MIT] Media Lab was fighting a reputation of doing silly and frivolous things and not hard, fundamental research. This project was not helping.

HR: We were in the Tangible Media Group and a lot of people’s minds go to the gutter pretty quickly when they think about physical connection and physical communication. Ishii was always talking about the more humane and emotional aspects of existence and not wanting people to go to the gutter. But, of course, that’s exactly what we did with this project.

SIGGRAPH: How were you able to get away with doing this project?

HR: It was a class project that wasn’t his class so it was a bit outside his purview. He’s a very tolerant and compassionate person, and I think he appreciated that we were doing serious technical work and having fun with it. I think the reaction was actually pretty joyful.

DA: He came around to some degree, seeing the reaction from some of the other faculty members — he got the spirit of fun and playfulness. Once the Intellectual Property Committee decided to patent this, there must be some value here. He was a wonderful advisor. I don’t won’t to give the impression that he wasn’t supportive. But maybe this project, maybe he wasn’t…

SIGGRAPH: It seems like whimsy was a big part of what this project was about.

HR: Well, yeah. I’m a toy designer. I love to have fun with my work, to make things that bring other people joy, a sense of discovery, learning, and play. It’s very human to smile and laugh and take things lightly. Why not? Why wouldn’t we do that with tech?

SIGGRAPH: How have people who’ve had a chance to experience the game reacted?

HR: They loved it. It was tons of fun. One of the things that surprised me when we were making it was that a female friend, also a grad student, said “It’s a shame only men can use a urinal. You should figure out a way so women can play, too.” So we made this big, ridiculous strap-on controller that had an oversize hose nozzle and a couple of squeeze bottles (pictured above). You steer it like handle bars on a bicycle, holding the two squeeze bottles, and aim with your hips. It was ridiculous and meant to be absurd, but also a little bit satirical, making fun of the whole notion of a “pissing contest”. People really loved putting that thing on and trying the installation. For a lot of women, it was their first time using a urinal, and the games were fun.

SIGGRAPH: Many consider this project somewhat unusual, or even outrageous. It certainly attracts attention. Can you discuss that aspect? What purpose might that serve?

HR: A lot of the reason I do my work is because I want to connect to other people. As a creative person, having people be interested in my work is really rewarding.

DA: The lesson for me was about the importance of humor and not taking yourself too seriously, even in academia. I feel like there is a connection humor and creativity. If you’re a little bit goofy and think a little past traditional boundaries, maybe you come up with ideas that you wouldn’t have otherwise thought of. Brainstorming is a bit like improv comedy — you come up with ideas and then you extend them and build off of them. For me, yes, this was extremely silly — a big, elaborate joke – but there is some real thought that went into it. My takeaway is don’t discount the importance of humor in coming up with new ideas.

SIGGRAPH: Looking back, are you glad you did this project?

HR: Definitely. It was fun. It brought a lot of people joy. I learned a lot. Dan and I got to do a project together and became better friends. It’s been great.

DA: Definitely no regrets. It’s one of these things that’s mildly embarrassing, but I’m also proud of it at the same time.

Dan Aminzade is currently a software engineer at Facebook Reality Labs in Menlo Park working on new consumer devices. He spent 12 years as an engineer at Google, where he prototyped wearables at Google X and helped build the WearOS software platform. He completed his Ph.D. in Computer Science at Stanford University, his M.S. in Media Arts & Sciences at the MIT Media Lab, and his B.S. in Computer Science at Carnegie Mellon University. He has taught courses at NYU ITP and has been a visiting researcher at Walt Disney Imagineering, Adobe Systems, Microsoft, MERL, FXPAL, and the University of Tokyo. His projects have been exhibited at CHI, UIST, Siggraph, NextFest, NEXT, Dorkbot, Art Interactive, and the San Jose Museum of Art, and have been written up in Engadget, Gizmodo, Slashdot and the New York Times. Dan has also been profiled on TechTV, Pro7, and in the film “Nerdcore for Life.”

Hayes Raffle is an award-winning product designer and inventor specializing in hybrid physical/digital objects to nurture learning, creative expression, and interpersonal communication. He is a senior staff designer on Google’s Learning and Education team, and is an Edmund Hillary Fellow developing new technologies for children’s hands-on learning. Prior to that, Hayes served as the overall UX lead for Google’s AR Devices program where he helped create consumer AR/VR products, including Google Daydream VR and Google Glass. Hayes recently spent a year researching technology use throughout the world. In his prior academic pursuits, Hayes earned a Ph.D. and M.S. in media arts and sciences from the MIT Media Lab, and a B.A. in fine art from Yale University. He has been awarded over 70 U.S. utility and design patents for his inventions, and has authored over 40 peer-reviewed academic publications in the areas of tangible media, technologies for learning, and virtual and augmented reality. His work in family communication at Nokia Research set a foundation for new technologies for young children to connect with long-distance loved ones. His toys and learning tools include the award-winning Topobo and ZOOB® building systems, and the Jabberstamp sound drawing tool. Hayes has shown his work in Europe, Asia, and the U.S. Various projects have been featured by CNN, The Wall Street Journal, The New York Times, The Tonight Show, i-D Magazine, and other major publications.