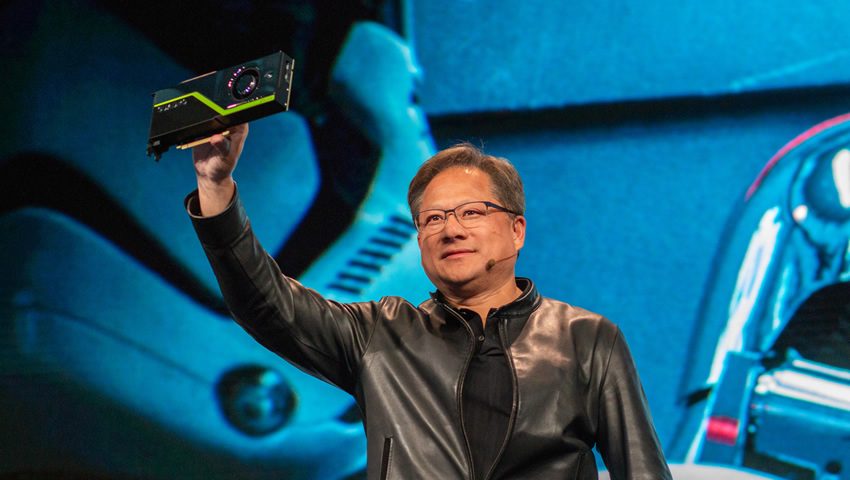 The following post was edited from content that originally appeared on Jon Peddie Research (JPR). To find out more about JPR and to subscribe to their newsletter, visit https://www.jonpeddie.com/

The original use and development for the GPU was to accelerate 3D games and rendering. The acceleration of the game’s 3D models involved geometry processing, matrix math, and sorting. Rendering involved polishing pixels and hiding some of them. Two distinctive, non-complimentary tasks, but both served admiralty by a high-speed parallel processor configured as a SIMD—same instruction, multiple data, architecture. The processors where used in shading applications and became known as Shaders. Those GPUs were applied to graphics add-in boards (AIBs) and served their users very well. SIMD is the architectural design, GPU is the branding name, just like we have an x86 CPU (brand) which is a CISC architecture, and an Arm CPU (brand) RISC architecture.

It didn’t take long for the mass-produced GPU, which enjoyed the same economy of scale the ubiquitous x86 processor did, to be recognized as a highly cost-effective processor with massive compute-density. As such it was applied as a compute accelerator, and other than an awkward programming interface that only a coder could love, it exceeded the expectations of the users, and the suppliers. GPUs ultimately found their way into the top 10 of the 500 supercomputers, year after year.

Increased Applications of the GPU
GPUs were also applied to image-processing workloads in high-end, ultra-high-resolution cameras, robotic cameras, and cameras in smartphones. That then led to the application of GPUs in machine learning and AI, both for training and inference.

And it didn’t stop there. GPUs were placed in servers in the datacenter and first used for bursty projects like film rendering as a service from the merchant cloud providers. And that led to the idea of making a remote GPU a virtual GPU, bringing the power of a big (and usually expensive) GPU to an occasional user, or a user that just didn’t have the budget or space for a powerful local GPU.

GPUs then found their way into the x86 CPU, as well as ARM-based SoCs, in the form of shared memory integrated GPUs.

As laptops became notebooks, thin and light, the space, power, and heat dissipation needed for a powerful GPU became problematic. Experiments were tried with bringing out the high-speed interconnection used by GPUs known as PCIe, but the complexities of cabling, connectors, and line drivers proved to be too expensive and too cumbersome to be effective.

And then USB-C/Thunderbolt was introduced and changed the equation. Now PCIe signals could be transported across a low-cost high-bandwidth cable and connector making the external AIB/GPU a practical docking option for the thin and light notebooks.

The GPU was used in so many configurations, and applications, it became necessary to use a prefix to designate which type of GPU and application one was referring to and so we got the following:

Schematically, the various GPUs look like the following diagram. 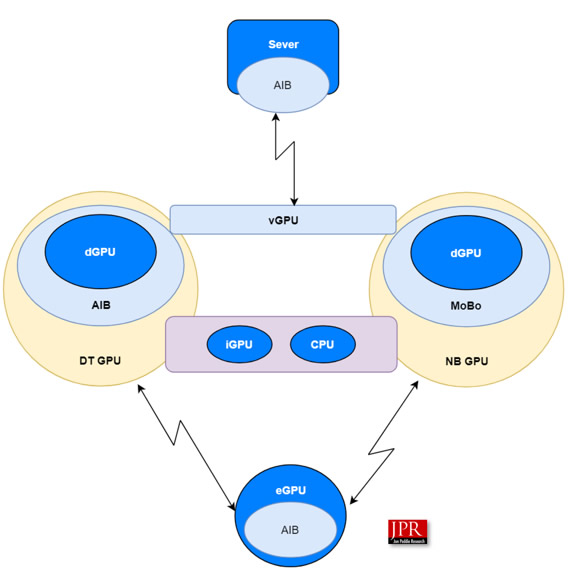 The Many Applications of the GPU

And it started because there was a need and demand to have faster, more realistic games. But the GPU market is far from a game, it is a mission-critical market with high demands, high-stakes, and extraordinary development and advancement exceeding Moore’s law by orders of magnitude.

Look around, how many GPUs do think are in your life? Probably more than you’d imagine.