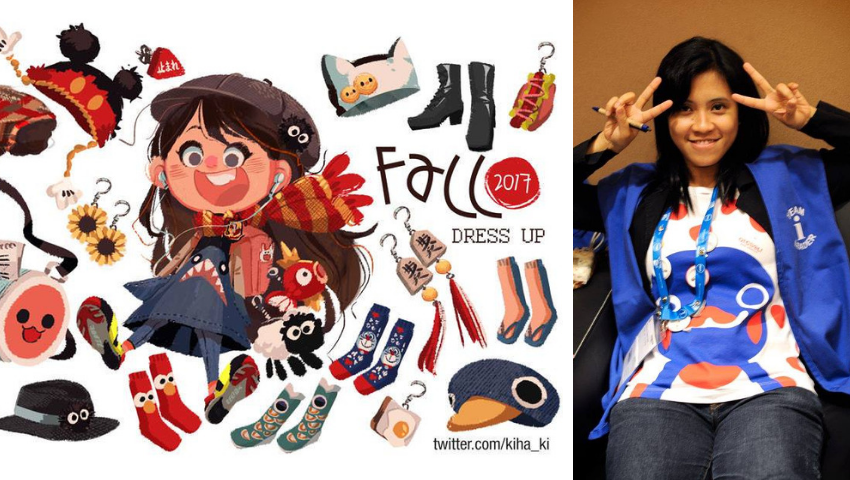 Listen on SoundCloud below or subscribe to the podcast on iTunes, Google Play Music or Stitcher.

Bektur (B): Hi Rianti, thank you for joining us. First of all I think obviously for SIGGRAPH especially SIGGRAPH Asia people you are a very familiar person but could you please quickly introduce yourself and tell us what you do.

Rianti (R): Hi! Hello Everyone! My name is Rianti Hidayat, I am Indonesian concept artist who is currently working at Japan Video-Game Industry. My job involved creating concept art, designing character for mostly game and anime; but i also creating illustration works and do sometimes art directing within the projects as well.
As for my work history, I worked at Ubisoft Singapore Pte. ltd in the past, and as for my recent works, you can see my name on The Legend of Zelda: Breath of The Wild ending credits as production artist.

B: So you’ve been with SIGGRAPH for a while, so how did you get involved in SIGGRAPH?

R: So yeah, it’s almost 10 years. I first [got] involved in SIGGRAPH since SIGGRAPH Asia 2008 in Singapore; the first SIGGRAPH Asia as Student Volunteer and gradually leveling up to Team Leader in 2011 SIGGRAPH Asia; then subcommittee 2011 in Hong Kong. This year i am honored to be the Program Chair for SIGGRAPH Asia 2018 Tokyo.

B: And, before you got involved with SIGGRAPH did you get a chance to work with international communities?

R: Yeah, kind of. So my first job in Ubisoft required me to work with colleagues from more than 30 different nationalities. It was challenging because I came from Indonesia, and our language is mainly not English. But yeah, going abroad is one of the best decisions in my life, cause it gives me a broader view of the world, makes me a better person. While the other best decision being involved in SIGGRAPH i guess *laugh*

R: I can tell my experience from Singapore and Japan but not much in Indonesia unfortunately. Because my working experience there is only from internship when i was a university student. So If I have to elaborate between my experience in Ubisoft Singapore and Japan; Ubisoft is location wise is in Singapore but since it was a Europe based-company, its working atmosphere is more easy-going and playful. I remember we had this Halloween Party every year where we kind of have to dress up and go to work. It’s pretty interesting. As for communication wise, their feedback is more straight to the point. Meanwhile in Japan the working atmosphere is more strict due to the culture; the communication in Japanese cannot be as straightforward as in English.
One other aspect that I find different is the of course the visual taste; since I am designer; in regards to designing something; what is appealing in Japan, for example
making character or decoration for certain objects or props. What is appealing in Japan might not be appealing for other country so that is also the cultural challenge I experienced.

B: Well I guess coming back from your origin of Indonesia, and talking a bit about Japan. What do you think is popular in your area, or your region?

R: So first of all I only know most about video-game industry compared to animation for example VR/AR, so I will mostly talk about that.
So compared to when I went overseas 10 years ago, there are more video-game indie companies in Indonesia. Most of the developers are of my age, who grew up through playing game from Playstation 1 and 2 era. They are kind of inspired to become game developers and build the company. So that’s one of the trends in Indonesia. And from the past year, Indonesia video game developers start to get their hands on console development kits. Before that it was pretty hard to get one, since to have development kit you need to have a certain name in the industry, experience, you need to be a big company to get one. There were also issues about customs and about how to bring it to Indonesia.1 But since the government started supporting creative industry including VR and animation; for the past year it is much easier now.
So yeah, ever since we got more development kit, they start making more and more console games.

B: So for people who want to work or get involved in your region, in your specific industry; what kind of things they should look out for?

R: For Indonesia, from what I’ve heard from my colleagues who are based there; Indonesia’s mobile industry is growing. Since the majority of the population is young, almost 50% are 25 to 50 years old; most of them are open to new technology, new media. So recently we see thirst for original content within the market. We start having more conventions for CG-related artwork; original ones which called POPCon2 which held once a year. We also start seeing online comic magazines, its publication which wasn’t there 5 or even 10 years ago.
We also have event called Game Prime3 which basically mini GDC in Indonesia where they invite speaker from CG and Game Industry to give talks about how to make games; we start improving our industry through those event.

B: Are there any company, you mentioned such event like mini-GDC; so are there any notable companies that people should be aware of?

R: So ever since 2015 there was this government organization called BEKRAF4. It’s literally translated to Government Organization for Creative related Economy. So what they do is, they start supporting CG related industry from Video-games, Animation, even AR and VR. They start creating competition and send the winner overseas to study; they also send young talent to GDC to learn; giving platform for them through booth at TGS (Tokyo Game Show) for example5
They also start giving funding and help local talents and company to grow. So yeah, that is definitely something to look forward to.
And since it`s a government organization, it’s kind of the main movement for CG related development in Indonesia in the future.

B: And what do you think is going to be the next big things in your area, or perhaps in your region?

R: Definitely mobile industry, It’s still growing because the market is big. And we also start having a lot of outsourcing companies actually. It’s still new, and we still need to build our talent; maybe if you see anime and games; you will start seeing Indonesian names on the credits. So this is like the first step; compared to Thailand, for example, we are still behind. I am sure this is going to be something to look forward to in the future; with more and more Indonesian talent involved in the industry.

R: I definitely see BEKRAF going to support that. I imagine they will invite a lot of people from CG industry, hopefully related to SIGGRAPH so we can introduce it to our program to Indonesia. And for the past 3 years, we actually see the increase in numbers of SVs from Indonesia. So hopefully they can be the future sub-committee when there are going to be SIGGRAPH Asia in Indonesia one day, hopefully!

B: Aside from the work I am also wondering, so for instance you are now living in Tokyo. I guess; I remember you did the whole pitch of why you should visit Tokyo for SIGGRAPH Asia Student Volunteers last year. So why should i visit Tokyo? Although I actually also live outside of Tokyo

R: Tokyo is a city that to be honest, I cannot get bored of, there always entertainment in every corner. You can randomly get off at certain station and walk around you there are always something interesting. It’s either a fascinating small cafe with a theme; for example cat cafe, owl cafe. Or you can go to museum; so many art museums in Japan. If you like pop-culture there are a lot of those based on anime manga but if you like classical stuff there also a lot of classic painting; world-wide famous painter as well. No matter what is your hobby; and if you like nature; there or course beautiful place a few station from Tokyo. So definitely a city that is really fascinating.

B: Are there any final suggestions or comments for the listener? I know most of them probably going to visit as student volunteers in few months.