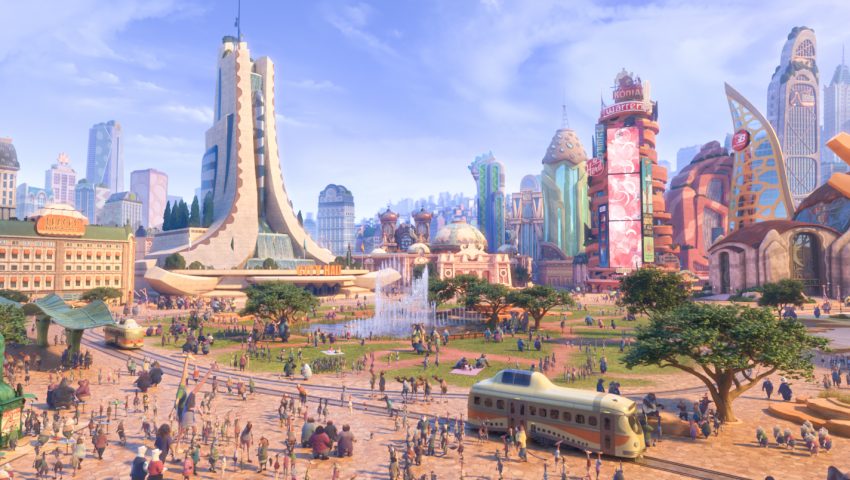 The journey to make the Golden Globe-winning “Zootopia” began six years ago when director Byron Howard finished “Tangled” and John Lasseter, chief creative officer for Walt Disney and Pixar Animation Studios, said to Howard, “What do you want to do next?” Howard noted his interest in returning to “those great talking animal films,” referencing classics like “Bambi,” “Dumbo,” and, in particular, “Robin Hood.”

Lasseter got so excited that he literally got up and hugged Howard. Thus began the journey for “Zootopia,” with a charge for the team to create a talking animal film “like nobody has ever seen before.” The animation department embraced Lasseter’s “like never before” mantra wholeheartedly, and started work on a story concept that, at its core, deals with bias.

Kicking off the SIGGRAPH 2016 Production Session on the film, Producer Clark Spencer, himself with 25 years of experience on films like “Lilo & Stitch” and “Wreck It Ralph,” talked about the need for realism in a universe entirely occupied and run by animals. This led the team to a heavy focus on two things: character and environments. Read on for insight from Spencer’s team members, including Michelle Robinson (character look supervisor), Ernest Petti (technical supervisor), Nicholas Burkard (technical animation supervisor), Brian Leach (director of cinematography, lighting), Sean Palmer (technical lead for Disney’s XGen), and Hans-Joerg Keim (head of environments).

The Art of Characters

The making of “Zootopia” meant the creation of 70 different species of animals, each with its own unique fur (i.e., mice, foxes, rabbits) or skin type (i.e., hippos, rhinos, elephants). And, with that, challenges such as putting clothes on the animals, which presented questions like, “How do clothes lay on animal that does not have shoulders?” Another challenge was developing each character to scale since, as Spencer alluded, the team wanted to keep realistic scale differences between each species — something that, historically, has not been a way Disney handled animal scale.

“It takes 95 of our littlest character to make up the height of our largest character,” noted Robinson.

To combat initial difficulties surrounding the specifics of individual animal species, team members did a ton of research, closely observing and studying animals at places like the San Diego Zoo Safari Park, Disney’s Animal Kingdom Theme Park, the Wildlife Learning Center, and even Kenya, Africa to observe animals in their natural habitat.

Through all this research, the team determined that, in a world without humans, all species in the film were assumed to have evolved to be bipedal. This ultimately led to several experiments and a ton of planning, causing the team to undertake a 6-month full refactor of Disney XGen, an in-house software, in order to be able to animate species’ fur in a way that worked on screen.

Next came the challenge of building the world of “Zootopia” and matching character scale to that of their environments. And so began more study sessions, with the team looking at how New York City was built and how it works. What they realized is that everyone comes into Manhattan to work but, at the end of the day, returns to neighborhoods to live. This inspired the creation of “districts” to represent each of the different types of animals — everything from Tundratown to Sahara Square to Rainforest District. Each district presented its own unique lighting and other environment challenges to appear as authentic as possible.

“Lasseter wanted the city of ‘Zootopia’ to feel like a character in the film. It had to be new and special while at the same time believable,” Keim said.

There’s not a lot of reference in the real world for an animal world built by animals, but the team imagined that animals would prefer more organic shapes versus the clean, straight lines of real-world cities. At the end of the day, there were three major challenges to “animalizing” the world of “Zootopia:”

*Numbers reflect only those sets and elements that made it into the final film.

Good luck to team “Zootopia” at the the 89th Academy Awards this Sunday. If you want to learn more about upcoming production sessions at SIGGRAPH 2017, click here.