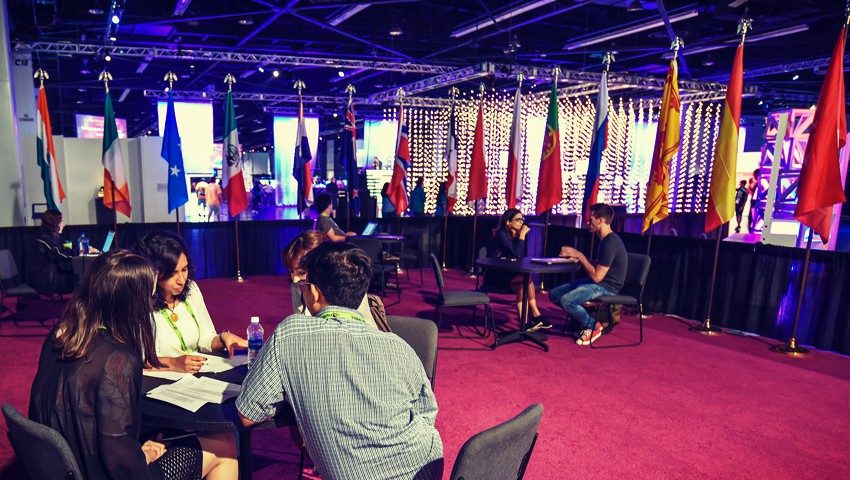 One of things that I love about attending the SIGGRAPH Conference each year is the coming together of like-minded people from all over the world. SIGGRAPH creates a global environment and allows for the meeting and intermingling of people you probably wouldn’t have otherwise had the opportunity to meet. SIGGRAPH as an organization understands the need to nurture and foster this global spirit that has made itself apparent at each of the conferences.

The International Resources Committee (IRC) is one such committee that is representative of and enhances the International atmosphere felt at each SIGGRAPH conference. In particular, this can be seen through the IRC’s regional presentations, which provide an overview of the current state of computer graphics (CG) in each of the world regions through presentations from academic and industry speakers.

One piece of feedback we received at the regional presentations this year was a strong desire to hear more news from within each global region. This inspired me to create a series on emerging trends in CG, as well as the state of industry jobs within each region.

First up — CG in Australasia! I talked with Greg Jowle (CG Supervisor at Animal Logic on The LEGO Ninjago Movie) and Andrew Silke (Animator and founder/ owner of Create 3D Characters) and they were kind enough to lend us their expert opinions.

In regard to emerging trends, Jowle believes that is difficult to discern trends that are solely unique to the Australasia region, since the CG community is a global community. He instead notes several trends that he believes are at the forefront internationally, and briefly outlines how they are being utilized within Australasia.

Most noteworthy, he cites the move to physically-based rendering. Jowle explains that ray tracing wasn’t used in large productions due to memory and hardware constraints, as well as the long rendering times it created. This has completely changed over the last several years, with most major companies using physically-based renderers now. “This change has made it much easier to blend CG into live action plates and to give CG animated features a more plausibly realistic feel.”

Additionally, Jowle noted the creation of content for VR, along with VR/ AR gear is changing the landscape. And on this point, Silke agrees. He tells us, “As I see it games and VR are very much tied together, and I see huge potential in VR so it’s an area we could work on… many people see potential in film/animation but I haven’t been convinced yet.”

Jowle’s views on the usefulness of VR to film and animation differ slightly from Silke’s and he compares the current popularity of VR and AR to the surge of stereoscopic films that were developed after stereo came back into fashion. However, he believes that there are still many challenges within VR/ AR content creation that need to be overcome, such as achieving quality high resolution rendering forevery possible angle of view.

Jowle goes onto say that while it’s true that VR and AR have been around in some form for quite some time, “initially most of the gear was aimed more at passive interaction … Other gear that has recently come out such as the Vive has controlling handles, which when used with a program such as Tilt Brush, allows people to interactively sketch in 3 dimensions.” Jowle gives the example of how the team at Animal Logic have found Tilt Brush to be a useful tool in feature animation pre-production and how they have used it to create “quick spatial studies as a precursor to CG environment creation.”

When it comes to the current working and job climate in Australasia, Silke believes that this region is strong in film, animation and commercials, but not as strong in games. He explains that,

“Australasians are great as all-rounders, as most of us are training in smaller companies before migrating to the larger places. People in the industry will commonly work in a number of areas and across more disciplines. This makes the market very strong within areas that are constantly changing. I feel like Australasians are quite quick on the uptake of new technologies.”

Silke fears that because the area lacks of AAA game studios, it will be difficult for the region to keep up with the rest of the world in VR and AR. As the AR/VR market expands, the region will be in a bad position to capitalize. However, Silke does see a potential for expansion in TV/long form narratives within Australasia, due to the lower costs involved in creating animation and VFX content.

Silke tells us that right now Australia is very dependent on the low dollar, and that the industry is particularly strong for skilled workers and few people with experience are out of work. Nonetheless, he believes it is a different story for students trying to make their way into the industry. He explains, “with the dollar low, schools are producing large numbers of graduates, so it’s pretty competitive for junior positions. Jobs are easily filled by these graduates. Between 500-1000 students are training in Sydney alone each year and there’s no way the industry will fill those positions.”

Jowle presents his perspectives on this issue. “In the past year we have seen a major change in the Chinese box office, which for the first time has exceeded the US in sales. This has meant an increased demand for content and an increased appetite for higher end work, specifically for the Asian market.”

He goes on to say that Australia has seen a recent upswing in production. And he gives the example of Animal Logic in Sydney working on two feature animations concurrently. “Which has meant a substantial increase in opportunities for local CG artists in a market that continues to be very competitive. This increased demand has also had a positive influence on students entering the market with long format productions, such as animated features as they rely on everything from senior skilled artists to first timers to form the large crew required.”

Stay tuned for more posts in this series, and be sure to join the global community of computer graphics and interactive techniques professionals for SIGGRAPH 2017,  30 July – 3 August, 2017 in Los Angeles, CA.